Big-box retailers are realizing smaller is better in today's marketplace.

Big-box retailers are realizing smaller is better in today's marketplace. 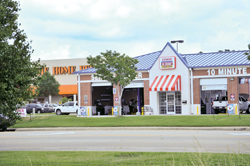 Express Oil Change has opened on a carved out pad site next to Home Depot on Ambassador Caffery.

It looks as if the national retailers have looked down at their toes and realized they've been sitting in the bathtub for far too long: They're shriveling up. In conjunction with overbuilding during the last decade, retailers' stores are simply too large for today's marketplace. Several stars have aligned recently that have made this reality all too clear; these include a slowdown in the overall economy, rising gas prices and a consumer shift to the full embracing of e-commerce.

While the effects of the economic slowdown and higher gas prices have been documented during past fiscal cycles, the now rooted e-commerce component is a new wildcard that experts in the field are trying to get a handle on. With e-commerce being recognized as a larger percentage of all retail sales, the brick and mortar stores themselves are experiencing a slower recovery than many experts anticipated. Big boxes were killer models over the past two decades with a vast selection under one roof and by virtue of their being larger than the competition. Then Amazon happened. The old joke is that the dinosaur big boxes are simply Amazon's showroom, whose product selection dwarfs even the most copious in-store selection. This fact, combined with consumers looking for even more convenience to avoid time away from home and spending a larger chuck of their income on fuel, is forcing retailers to react.

As I mentioned in this column about this time last year, the first approach of retailers to reduce the pressure on their fixed costs was to carve out pad sites and either sell them off or ground lease them to synergistic users. Home Depot on Ambassador Caffery was the first to complete this task locally with the recent opening of the auto repair and lube shop in front of its store; now there are serious conversations of other similar deals coming to fruition. Unfortunately, most big-box retailers did not have the opportunity to use this approach, as they simply don't control their respective parking lots. These tenants are now exploring their options to reduce hard occupancy costs as well by renegotiating and subsequently surrendering square footage back to their landlords. I have been a part of two such deals where Old Navy has given back space (10,000 square feet at one location and 15,000 at another) through threat of leaving the center altogether or extending the lease term to provide some benefit back to the landlord. These surrender deals can be beneficial to some developments and catastrophic to others, but that's an entirely different column.

While the aforementioned strategy is one of the methods retailers are using, another is looking to backfill into more dense areas with substantially smaller footprints. For example, Target has reduced its urban prototype from the 175,000-square-foot store on Ambassador to 60,000-100,000 square feet. The new prototype will in essence be a mini-Target, offering a broad array of products from fashion to home furnishings, but with a focus on daily essentials. Of course not to be outdone, Walmart is reducing its current Supercenter footprint from an average of 185,000 square feet to new 40,000-square-foot versions. The industry is seeing the same across the tenant mix spectrum, with both hard and soft goods alike.

Best Buy, however, is doing something a little different; while it is reducing its new store size from 45,000 to 36,000 square feet, its approach to shed existing space at this point is somewhat unique. Best Buy is actually planning to carve out parts of existing locations and sublease the space to smaller retailers. Flyers have already been circulated in the brokerage community with the attempts to lease out between 4,000-15,000 square feet of existing stores. And, yes, Lafayette is on that list. This process isn't simple to pull off, though, as the subdivided spaces will require its own buildout - including electrical systems, restrooms, air conditioning, etc. Obviously Best Buy believes it is a worthwhile cause. While on the topic of Best Buy, be on the lookout for its attempt to locate more conveniently to the consumer with a just-announced smaller format. The company plans to launch 150 3,000-square-foot Best Buy Mobile stores.

Now allow me to contradict myself somewhat with this: If retailers are good at anything, they are easily best at studying and embracing the consumer's habits. While brick-and-mortar store shrinkage is a reality that's here to stay, the old dogs might have a few new tricks up their sleeves to keep traditional shopping sexy. Hence the reason for steady rise in their social media presence and cyber marketing: "checking-in" through outlets like Facebook or FourSquare to receive 10-15 percent off of your next purchase or a free appetizer at a restaurant. Ad campaigns spread through Twitter offering similar perks and are easily shared on a peer-to-peer level by the consumer as well. Also, most of the major traditional mall owners have seemed to tap into the "app" craze by designing applications of their own to attract, then connect to, shoppers entering the malls. The apps allow participating retailers to customize their offers in real time by region or on a store-by-store level. These types of campaigns are aimed squarely at the ever-growing technology generation to keep it intrigued enough to actually purchase at the bricks and mortar location rather than simply using it for a "touch and feel" showroom only to head home and purchase it online.

As the big-box retailers emerge from the two-year cold bath all shrunken, I certainly don't expect their physical stores to totally go by the wayside, as shopping is still an experience for the consumer and traditional retailers are far too sheepish to stop constructing physical stores. But they will be smaller. Possibly effectively acting as a billboard more than ever before, these physical locations will cater to the scores of people who still favor the touch and feel of shopping. But they'll be closer to you and will offer a much more specialized feel.

Ryan Pécot is a commercial broker with Stirling Properties. Since 2001 he has worked out of the firm's Lafayette and New Orleans offices. Contact him at [email protected]