Memo to Acadia Parish: The 1960s called, they want their politics back.

Memo to Acadia Parish: The 1960s called, they want their politics back. 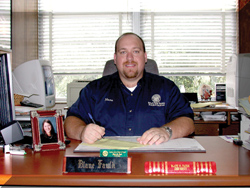 Talk about team spirit: Employees of the Acadia Parish Clerk of Court's Office are getting in shape compliments of their employer. The office's "Get Fit Program" is detailed in an inter-office memo distributed July 8 by Chief Deputy Clerk Blane Faulk that came to us by a source. The program, Faulk writes, "will shed pounds and inches off in a matter of weeks." Best of all, according to Faulk, the program is free.

This sounds like a pretty awesome team-building effort and means of helping ensure the health of employees. But it isn't.

The "Get Fit Program" the chief deputy trumpets entails employees hitting the pavement and campaigning door-to-door for the re-election of their boss, Clerk of Court Robby Barousse - in Estherwood and Egan July 11 to 14, to be specific. In the swelter of a Louisiana summer, to be dramatic. But fear not: "Hydration fluids will be provided for all days for participants," Faulk adds reassuringly.

The memo begins like a cute joke before devolving into an ominous reminder: "On a serious note," Faulk continues, "our campaign is in full swing and several have been working hard already to secure everyone's job. We take this campaign very seriously as it affects everyone here, even those who have already retired and are planning to retire. Everything that this office provides to the staff and retirees can be taken away at any given time with a change in Clerk, therefore, we must stand and protect all our futures."

C'est what? Jobs on the line? Retirement benefits, too?

Indeed, employees of clerks of court in Louisiana are at-will, not civil service, but this seems a little beyond dramatic. And it's a near certainty that accrued retirement benefits cannot be rescinded.

The icing on the cake - bad metaphor, this being a fitness program - is employees were also assigned tickets for a Barousse re-election fundraiser, referred to in the memo as "your tickets," which they were expected to sell.

The memo has Barousse's opponent in the Oct. 22 election understandably upset.

"I've never even once mentioned that these employees would be laid off or fired if I happen to have the opportunity to serve them," says Crowley businessman Larry Lege, the only person so far to announce a run at the clerk's office in Acadia Parish. "And that's one thing I didn't like in the letter, that they scared them into thinking that they'll lose their position or their retirement if I walked into that position."

But it's understandable that Barousse might be a little rattled by Lege's challenge: Robby Barousse has never faced a re-election opponent. In fact, it's fair to say that the clerk of court office in Acadia Parish "belongs" to the Barousse family: Robby Barousse's father held the job before him, and his grandfather was clerk before that. The Acadia clerk of court office has been in the direct succession of the Barousse family without interruption for at least five decades. From father to son to grandson - an entitlement program at worst, a dynasty at best.

Robby Barousse was first elected, unopposed, in 1999. An apocryphal story in the parish holds that his father, longtime Clerk Andy Barousse, was set to run unopposed in 1999 and waited until the 11th hour during the qualifying period to retire, effectively handing the job to his son, who qualified at the last moment. Robby Barousse was re-elected in 2003 and 2007 without opposition. Andy Barousse, going back to 1983, which is as far back as the secretary of state's electronic records go, was re-elected every four years without opposition.

"This is Hooterville! It's so 1960s; it's not even funny!" roars a public official in Lafayette who asked not to be identified, speaking of the "Get Fit Program" memo. "With this being an inter-office memo, I see all kinds of problems here. There should be a fire wall between employees and campaigning. Maybe that flies in Crowley or Rayne, but in this day and age of the Internet, you can't just do those things."

Evidently you can. But is it ethical? Specifically, does it violate the Louisiana Code of Ethics?

Part B of Section 1116 of the code, subtitled "Abuse of Office," reads in part: "No public servant shall use the authority of his office or position, directly or indirectly, in a manner intended to compel or coerce any person or other public servant to engage in political activity. For the purposes of this Subsection, political activity' means an effort to support or oppose the election of a candidate for political office in an election."

But duty is in the eye of the beholder. Are Barousse's employees being compelled or coerced into politicking for their boss? Is it their duty to canvass for his re-election and sell fundraiser tickets? Would the state Board of Ethics find fault in Chief Deputy Faulk's epistle? Not unexpectedly, the board is frustratingly circumspect.

We sent a copy of the memo, with names and locations redacted to keep the discussion on "general terms," to Communications Director Alainna Giacone, who consulted Chief Administrator Kathleen Allen.

"[Allen] doesn't know before something like this actually goes before the current board, how they would interpret it," Giacone says, speaking for her boss. "Would they say this is a clear case of someone being compelled or coerced? She would be hesitant to comment on this specifically unless it actually came before the board and she actually got some guidance from them and opinion from them."

Even if the board took up the matter, it would be mum until an investigation was concluded and charges, if any, were filed. But the board may yet look into this "Get Fit Program." Lege says he plans to file a complaint with the Board of Ethics through his re-election committee.
"I don't know why I feel like I'm the one that needs to step up and challenge this," Lege says. "Nobody in Acadia Parish wants to mess with this."

In a written response emailed Monday afternoon to The Independent, Faulk insists that campaign activities by clerk's office employees "are strictly on a volunteer basis, and no one here is required to participate in campaigning or to do anything outside of the scope of their employment. Fortunately, however, many do."