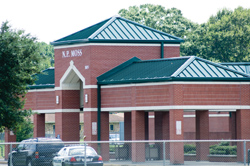 Preliminary school performance scores released by the state last week show slow-to-static improvement rates for poor-scoring schools in Lafayette Parish. Without drastic growth, three north Lafayette schools will reach academically unacceptable - read failing - status by next year.
Northside High, JW Faulk Elementary and Alice Boucher Elementary schools edged above the minimum 65 points needed in 2010-2011 to avoid the label of academically unacceptable. But with performance scores of 68.2, 67.1 and 67.3, respectively, the three north Lafayette, high-poverty schools could be shifting into the failing category by 2012 when the state's minimum school performance score is raised to 75.

Based on The Independent's review of SPS data from 2008-2011, meeting the new minimum standards by next year will be challenging, if not unattainable, for Lafayette's at-risk students. Northside's performance scores have dropped by 1 point since 2008, and J.W. Faulk has only increased its SPS by 2.5 points in three years. Northside and J.W. Faulk need seven and eight point gains, respectively, by 2012 to meet the new minimums. Alice Boucher has shown the most improvement of the three with a 10.6-point increase in its SPS since 2008. But Alice Boucher's gains were notably slower (1.8 points) from 2010 to 2011 than they had been in previous years. And the elementary school must raise its overall score by eight points in 2012 to avoid state sanctions.

Statewide, 155 schools were placed on the "Academic Watch" list for earning scores of 65-74.9.

"While schools on the Academic Watch list do not currently face sanctions, the list provides schools with notice that they will fall into [academically unacceptable school] status if they do not raise their SPS above 75," the state education department says.

Not included in the preliminary data is the SPS of N.P. Moss Middle School, which long held the title of lowest performing school in the parish before the school system closed its doors in May. DOE spokesman Barry Landry says Moss' scores will be released in the fall along with all other schools that didn't have to be notified of their low performance before the start of the new school year.

Low-scoring schools' data are released early so they can offer school choices and supplemental programming during the new academic year, something Carencro High is now faced with thanks to the latest data. Despite a rigorous college-prep curriculum offered to some students through its Academy of Information Technology, the high school failed to make enough gains in reading for its black and disabled populations, two subgroups identified by the federal No Child Left Behind Act. Because the high school didn't reach its improvement goals in those subgroups for two consecutive years, Lafayette Parish School System spokeswoman Angie Simoneaux says students at Carencro High now have the option of transferring to Comeaux High or Acadiana High.

Superintendent of Schools Burnell Lemoine will not comment on the overall "ups and downs" of school performance in Lafayette Parish until scores are in for all schools in the district, Simoneaux says. Be it now or later, it'll take a masterful PR strategy to put a positive spin on the state of north Lafayette schools.

The achievement gap between poor, minority school scores and the rest of the district has long plagued the local school system, and it's been repeatedly noted in this newspaper and in the minds of concerned residents who want to see a 95 percent graduation rate parishwide. As we reported in The Ind's May editorial, "Help Wanted," Lafayette Parish had a 70.4 percent graduation rate in 2010. While roughly 78 percent of white students graduated, only slightly more than 60 percent of black students earned diplomas.

Meanwhile, the Lafayette Parish School Board continues to search for a new superintendent to replace Lemoine when he retires Dec. 31, the halfway mark of a school year in which performance scores face the highest standards ever implemented statewide.

Community feedback sessions on the superintendent search begin Aug. 18 at David Thibodaux Career and Technical High School. It's the first of six public forums in which the public is encouraged to give its input on what it wants to see in the new top administrator of Lafayette Parish schools.