Ever since the first speed van started creeping the streets of Lafayette back in 2007, electronic traffic enforcement by Lafayette Consolidated Government's beleaguered vendor, Redflex Traffic Systems, has sparked its share of controversy. And despite traffic accidents on a steady decline, there remains a small contingent of passive-aggressive drivers who willfully thumb their noses at the program and who owe massive amounts of unpaid fines - bordering on $5.4 million with the various late fees strewn in.

"Mark Henderson, at one time, was the record holder," says Tony Tramel, LCG traffic and transportation director. "He has no violations in the last 120 days, but still has nearly $13,000 owed. Arthur Barry is the individual record holder with 212 violations but only $9,100 owed. He will go through and he does it intentionally. The other day he was going 65 miles an hour in a 35 mile an hour zone some place. But there is a concern that we have a person like this who is intentionally violating the law and, for whatever reason, feels that he shouldn't comply with the law that everyone else has [been] requested to do so."

And what's keeping these law-abiding drivers from barrelling through camera-equipped intersections like the ones at Ambassador/Congress and Settler's Trace/Camellia, which have two of the highest rates of citations? For starters, a bad credit score.

According to the ordinance that created the program, "the actions which can be used to enforce the payment of the violation and related fees may consist of but not be limited to immobilization of vehicles (booting), reporting the debt to collection agencies/credit reporting agencies, and/or initiating actions through the small claims court."

Any vehicle owner who fails to pay his or her citation after 40 days from the date it was mailed is subject to a late payment penalty of 1.5 times the original violation. Fines can then be contested by requesting an administrative adjudication, which is conducted by the adjudication bureau, within the first 30 days after receiving a citation.

But even as marquee violators like Mark Henderson (pictured on the cover letting the cameras know exactly what he thinks of them) and Arthur Barry accrue high-dollar tabs with SafeSpeed/SafeLight, the program is not utilizing booting as a collection tool and has yet to take anyone to small claims court, despite that it is authorized by ordinance to do so. LCG and Redflex split funds collected from the program 50-50, and delinquent account collection is handled by RedFlex. LCG is in discussions about its next steps to ensure violators pay up, but for now, the program is basically relying on violators to pay of their own volition. An honor system, if you will. 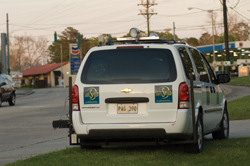 "I know there are a number of violators who have a significant amount of violations, and we're looking at right now some procedures that we can put in place to collect from those people," says City-Parish Attorney Mike Hebert. "We want to make sure whatever we do is something that we can enforce on a continuing basis, because I can imagine we're going to have a significant volume of these to start with and we want to have a process in place by which once we get past that initial load we can do fairly efficiently on a regular basis."

If a person already has bad credit, the threat of further damaging it isn't going to carry much weight as a punishment for not paying a violation for running a red light or speeding - but booting could keep him fearful of the flash. However, there's a snag with that, too.

In 2009, Stephanie Ware, a licensed private investigator and one-time employee at KVOL 1330 AM, along with cohort Todd Elliott, also formerly of KVOL, launched a vitriolic campaign against the Redflex program and the Durel administration for supporting it. This reached a crescendo when the duo filed a lawsuit in state district court alleging that the SafeLight/SafeSpeed program was unconstitutional and illegal.

In Stephanie Ware, Et Al vs. Lafayette City-Parish Consolidated Government and Redflex Traffic Systems Inc., a judge found that the city ordinances did not conflict with state law nor a person's constitutional right to due process.

But there was a caveat: District Judge Glennon Everett noted that because the right to request a hearing exists for 30 days after the initial notice is given, there is no forced collection and no judgment rendered before the ticket receiver is given the chance to contest the civil penalty. When "applying the same rationale" to the booting provision outlined by LCG's ordinance, Everett ruled that the practice of booting Redflex violators "very well may not meet constitutional requirements of procedural due process." 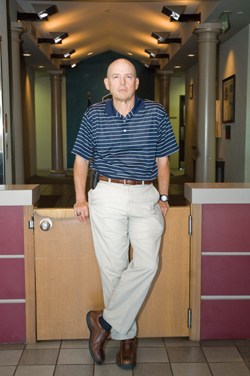 In other words, Everett says LGC's notices fail to warn violators that they may be booted.

"From a legal perspective, if that booting issue is resolved favorably to LCG, then booting is an available mechanism according to the ordinance," says Hebert.

And if highwaymen like those violators at the top of the list (see related sidebar) aren't swallowing these debts, then who is?

"One of the interesting things about this is that the people who are violating the local laws, violating the traffic laws for your community, are somehow trying to cast themselves as victims," says Tom Herrmann, a spokesman for Redflex, in a phone interview from his office at Australia-based Redflex's U.S. headquarters in Arizona. "The victims are not the people who are running red lights; the victims are the people who are injured when those accidents happen. I think that's why people universally, or a very large majority, favor the traffic cameras. Yes, there's opposition and, yes, it's vocal, but most people, when they think about it, think, I'd rather have a safe intersection.'"

"As far as who eats it [the fine], that's a difficult question to answer in this context. Everybody's eating it until it's paid," adds Hebert. "It's not like any money is deducted from RedFlex or LCG. It's just an additional assessment on the violation. That's part of the current concern, and that's part of what we hope to change by putting in place an additional collection and enforcement mechanism here locally.

"What goes on now is just one option [reporting to a collection agency] that's currently available under the ordinance," Hebert continues. "What we're looking at now is to expand into some of the other options on the collection of unpaid fines through some other means."

One of the other options the city-parish attorney is authorized to pursue under the ordinance is to "file suit to enforce collection of unpaid fines and/or related fees and penalties imposed under section 86-181 by lawful means to secure such payments."

For scofflaws like Barry and Henderson, who owe many thousands of dollars, hauling them to court may be a cost-effective option. But is it worth taxpayer money to go after violators who only owe a few hundred bucks? Likely not.

Hebert adds that LCG's legal department is reviewing every option it has for how it will handle those who haven't paid.

"There's an issue of fairness here that we really want to address," says Hebert. "This is something that we're looking at internally, and all the lawyers are looking at [measures] that are in the ordinance and those that we might want to put into the ordinance. I mean we just want to do a top-to-bottom review of this to see what other options we may have to make collections more effective, and we don't know what will come out the other end of that process."

But on the other end of this process is the adjudication hearing. And those who request an adjudication, which is conducted by independent contractors, needn't worry about being sandbagged: An advance hearing is provided during which the images and video of the incident in question are shown to the accused violators to ensure they are aware of what will be presented in the hearing. They are then afforded the option to withdraw, allowing them to pay the fine but avoid the additional $30 adjudication fee. And if they choose to proceed and are found not responsible, no fines or fees are due. 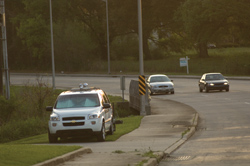 In the program's hey day, the rate of successful appeals was relatively low - about 25 percent. But, as LCG stats show, in the majority of cases the violators withdraw their appeals before moving on to contesting the violation in an adjudication hearing. Those hearings used to be held every Friday; now they're held just once a month.

LCG has accumulated $5.37 million in fines since the program's inception. Aside from keeping the "lights on" and paying for the program's day-to-day upkeep, the money goes into a Traffic Safety Fund, an account created by the City-Parish Council to receive the "revenues" from the program - revenues earmarked for traffic safety-related programs. For the 2010/2011 fiscal year, more than $2.5 million was appropriated for it.

"So you pay the vendor first, who's doing the services," explains Tramel, "and then if there are any remaining funds they are to be used for traffic and safety improvements including but not limited to public education, intersection improvements, dedicated police officers, etc."
He emphasizes that all of the money in the Safety Trust Fund is strictly violator funds; it contains no tax dollars. 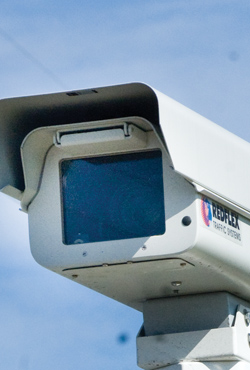 Tramel remains the program's biggest booster. "First of all, what we're trying to say is that a traffic crash is a relatively rare thing and there are many things that cause traffic crashes - driver behavior, different vehicles, weather conditions, different conditions, light, day, night - you name whatever it is, those are relatively rare occasions that take place," he says. "The most important thing is are we changing the [driving] behavior of people? And that's a hard thing to measure."

Dean Tekell, Tramel's predecessor who now operates his own traffic consulting firm, says that while he's not a fan of the Redflex program, it has changed his driving behavior. "While the claims of the program's safety, from what I've seen, are somewhat exaggerated," he says, "overall they're beneficial."

Along with changing drivers' behavior, the program is also funding about 10 significant infrastructure projects, including a $400,000 urban pavement striping program, a $600,000 intersection overhaul at Gloria Switch Road, a $570,000 Johnston Street/Louisiana Avenue/Evangeline Thruway improvement and a $270,000 intersection upgrade at Congress and University. Those are big ticket improvements funded solely by people who choose to break the law yet pay their fines. Imagine what could be done with local government's portion of the approximately $5.4 million lead-footed violators owe - if LCG can just figure out how to get at it.