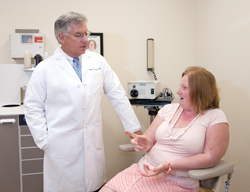 Robin Akbar Broussard had everything she dreamed of - a beautiful, loving son, a promising career in medical administration and, most important - her health. Or so it seemed. Although she had a history of asthma, she was able to control it with nebulizers and inhalers.
But at 27, that all changed.

At the time, the single mother was running 15 miles a week, weight training an additional four hours and actively participating in her young son David's activities. Gradually, she started experiencing some disturbing symptoms - wheezing, heart palpitations, shortness of breath.

Thinking she had a sinus infection, she started taking over-the-counter medications. Nothing seemed to work. With no health insurance, she sought help from a local free clinic. After taking antibiotics and steroids, her symptoms subsided.

Then, her symptoms returned with a vengeance, progressing to the point where she could no longer participate in her son's school events. By then, she had health insurance through her employing hospital, and consulted a pulmonologist, cardiologist and allergy/asthma specialist. The doctors had no answer.

Eventually, Broussard started coughing up blood. When she still could not get any answers from the medical community, it was time to make some tough decisions. She gave up her career and her home, landing in a women's shelter for a brief period. The hardest part was letting go of her son. She asked David's father to take him temporarily, which he did in January 2008. "That was a huge adjustment, because my son was my absolute best friend," she says.

Broussard immersed herself in discovering the source of her illness. At the time, she was on 15 medications. She saw nine different doctors, who continued to treat her symptoms without finding the underlying cause. On her journey to wellness, she came to rely on Lafayette otolaryngologist Dr. David Foreman. "He went above and beyond his realm of specialty," she says.

Foreman continued to treat her with steroids, and about a year later, he performed sinus surgery. Broussard did relatively well for a while, but her symptoms returned. "She did remarkably well with steroids, then she did horribly when she got off," Foreman recalls. "I think that was the biggest clue that something weird was going on."
After continuing to decline, Broussard found out about an immunotoxicologist in Spring, Texas, through an acquaintance. In September 2008, the doctor performed a CT scan of her lungs, which revealed nodules and scar tissue.

The Texas doctor recommended a needle biopsy of her lungs. Unable to afford traveling to Texas for further treatment, Broussard returned to her pulmonologist in Lafayette. "He told me I needed a psychiatrist," she recalls.

On the verge of giving up, she started thinking about her son, who was 11 years old at the time. "I couldn't stomach the idea of another woman raising David," she says. So, she decided to find a specialist.

She returned to Foreman, who recommended National Jewish Health in Denver, Colo., named the No. 1 respiratory research and treatment institute in the country by U.S. News & World Report. "I felt that she had a huge pulmonary problem, so we had to look elsewhere," Foreman says.
Two weeks after applying, National Jewish accepted Broussard as a patient. The next step was finding the funds to get there. She received donations from different sources - her mother, a nurse friend, her sister, her roommate, church members. "Really and truly, it was the hand of God," she says. "It's hard for me to even explain - my plane ticket, my hotel stay, my food, my personal needs while I was there - all of that together cost me about $5,000. And, I had no job. That was just a miracle working."

Before she left for Denver, Robin and son David went to the church altar to pray. "I'll never forget his prayer on behalf of me," she says. "Please let my Mom get to this hospital. Please give the doctors the answer. And, please let us come back together as a family.'"

For the first five days at National Jewish, Broussard underwent a barrage of tests, including eight lung biopsies, a bronchoscopy and laryngoscopy. Finally, the team of specialists found the answer: Churg Strauss Vasculitis, an extremely rare disease (affecting roughly 3,000 people in the U.S.), which results from inflammation of the blood vessels and causes injury to the organ systems. "Essentially, it's an autoimmune disease which is predominated by a certain cell type that attacks the small vessels in the body, early on, the sinuses and the lungs," Foreman explains.

The diagnosis came a week before Broussard's 32nd birthday. "It was the best birthday gift that I received in my entire life," she says.

Today, Broussard sees a team of doctors headed by internist Shameem Akhtar, pulmonologist Richard Fei, cardiologist Joseph Kowolski, rheumatologist Ladislas Lazaro and Foreman. Although she will never be able to work again, she is living her life to the best of her ability. Three months after beginning treatment - consisting of steroids, oral chemotherapy and 22 daily medications - she got David back and moved out of the shelter into low-income housing.

Her new neighbor, Kenneth Broussard, became Robin's boyfriend, and on May 28, the couple married. "We live our simple life," she says, "which I'd much rather have than all the worldly goods that I had before."

This January, Broussard appeared in an episode of the television series Mystery Diagnosis on Discovery Health. "It was wonderful," she says. "I was so vindicated to give my story nationally." She was also written up in an article for the National Organization for Rare Disorders. "My goal, and my prayer, is to be a mouthpiece to those who are hurting, who still don't have an answer, who are discouraged and feel that there is no hope," she says. "Because there is hope, always, until the last breath. Don't quit on yourself. You have the right to rightfully disagree with your doctors. Get up and keep going.

"Doctors need to communicate among each other and with their patients," she continues. "I've made it clear to all of them that I know what I'm facing and I know what the illness is eventually going to do. All of us have a number of days, and I'm asking for mine to not be quantity, but quality, at whatever the cost."