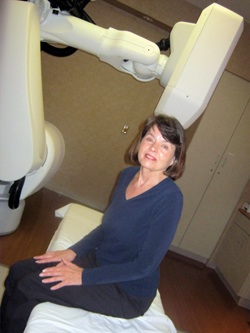 Denham Springs native Helga Pope was at the end of her rope. Diagnosed with colon cancer, Pope underwent surgery followed by 12 chemotherapy treatments. She was in remission for a year, but soon after another tumor appeared - this time, in her lung. She had surgery to remove the tumor, resulting in a 40 percent loss of her lung. Then, another lesion showed up. It was inoperable.

Pope's prognosis was grim. "We were devastated," she recalls, "because the first line of chemotherapy didn't work. And I was very hesitant to have chemotherapy again."

Then, her daughter, also named Helga, discovered a glimmer of hope. While working at her medical supply sales job, she paid a call on Lafayette General Medical Center. There she found out about CyberKnife, a noninvasive robotic radiosurgery treatment for specific tumors, including lung lesions. This machine precisely pinpoints a beam of intense radiation therapy to a target without damaging surrounding healthy tissue. The treatment itself doesn't use an actual knife, and the patient doesn't feel anything. Encouraged, she told her mom about CyberKnife, which has been at LGMC for four years. Pope says her Baton Rouge doctors did not even know the procedure was offered in Lafayette.

After researching CyberKnife on the Internet, Pope decided to see if she was a candidate for the procedure. She contacted LGMC, which referred her to radiation oncologist Dr. Brent Mahoney, a CyberKnife specialist. The treatment is indicated for patients with certain lung, brain, spinal, pancreatic and prostate lesions. "I've seen fantastic success rates with this procedure," Mahoney says. "For early stage lung cancer, we've seen local control rates which are well in the upper 90 percent range." Mahoney examined Pope's extensive medical records before telling her the good news - she met the criteria for CyberKnife.

For her previous lung cancer treatment, Pope had endured a painful surgery where doctors inserted a chest tube. Pope's 12 chemo sessions had been insufferable, causing her to drop to 108 pounds and leaving her exhausted.

Pope was pleasantly surprised with the CyberKnife treatment. During the procedure, she laid on a table atop a comfortable "beanbag" cushion for about 45 minutes while viewing a tranquil photo of colorful Dutch tulips on the ceiling. As the machine precisely zapped the tumor during the painless session, she listened to soft, relaxing music. "This has been an incredible experience for me," she says. "It was a very pleasant experience."

When it was over, she had no side effects. "None. Absolutely none," she emphasizes. "When I'm finished, I get up, we go eat, and I go home and do what I do."

Her reaction is pretty common, Mahoney reports. "There is almost universally no downtime. People leave the center feeling exactly the same way they did when they showed up."

Usually, CyberKnife requires one to five treatments and has fewer long-term side effects. "Generally speaking, conventional radiation therapy is less effective, damages a lot more normal tissue around the targets and typically takes six to eight weeks," Mahoney says. "This has been a fantastic tool to achieve excellent results and have the lower side effect profile that radiosurgery offers these patients." CyberKnife is covered by most insurance companies.

Following three of the robotic treatments, Pope returned to her Baton Rouge doctor four weeks later for a PET scan. Remarkably, the tumor had disappeared. "There wasn't even scar tissue," she says.

Although the possibility of metastasis lingers, Pope remains upbeat. She has spread the word in Baton Rouge, distributing materials about CyberKnife at several oncology treatment centers. "I have told everyone I know about this," she says. "I think I've gone through all this to find CyberKnife to help other people. It's just been incredible for me. This is a miracle."