Nearly two years after the Legislature created a taxpayer-supported fund for military families, the state is still dragging its feet. 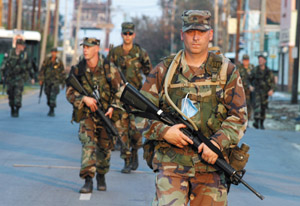 Despite the fact it was officially signed into action by Gov. Kathleen Blanco almost two years ago, a special taxpayer-funded assistance program for military families is just now starting to lurch forward. Bureaucrats in the Department of Social Services have been slow to claim the program as their own, even though the law places oversight firmly in their camp, and thousands of dollars intended to help soldiers' relatives have been held hostage.

The Legislature created the Louisiana Military Family Assistance Fund in 2005 to award need-based grants to families of Louisiana National Guard and Reserve forces called to active duty since the Sept. 11 terrorist attacks. It also benefits guard units tapped for natural disasters like hurricanes. In all, more than 11,800 men and women are eligible for the program, as are their 12,000 or so dependents.

But not a single dollar has been dispensed by the program, and DSS missed its Jan. 1 deadline to file a report on the program to the Joint Legislative Committee on the Budget. Today, DSS still can't point out any benchmarks or timeline for the program.

The program is simple enough to follow. Taxpayers have had the option to dedicate all or part of their returns to the cause through a check-off box on forms for individual income, corporate income and franchises. Private donations have also been collected. The fund provides bridge money, or emergency cash, to families who have lost a source of income due to their military service.

Applications can be for something as simple as new tires or rent; the initiative was engineered to reach as many people as possible and concentrates on the smaller complications of life in the Guard. However, more substantial allotments are also available for casualty cases. A lump sum payment of $2,500 is supposed to be offered to the families of soldiers killed in action, missing in action or taken prisoner.

Blanco formed an oversight board for the fund, required by the enacting law, earlier this year. Its initial meeting was held this month. Roughly $10,150 is sitting in the fund, based on records released by the state treasurer's office. Conversely, board members were told at their March meeting that upwards to $100,000 has been collected, according to Sen. Reggie Dupre, a Democrat from Terrebonne Parish who authored the original legislation and serves on the board. Dupre says there may be a chunk of private donations out there that haven't been added to the total tally yet.

Cleo Allen, a spokesman for DSS, refused to release any numbers or shed further light on how the program is progressing. But this much is sure: no guidelines have been drafted for the disbursement of the money. A call seeking comment from Blanco two weeks ago was not returned, but Allen says the 2005 hurricanes stretched the process out longer than expected and there was a slight hold for more money to come in. "We did experience some delays with Katrina and Rita," Allen says, "but remember that the whole point is moot without the money."

It was a challenge for all state departments in the wake of the 2005 hurricane season, but it's interesting to note that one of the board's first official actions, as prescribed by law, was to find an independent administrator to take over the program from DSS. Dupre says there may be an ethics opinion in the works to weigh in on DSS' involvement, but the department hasn't shown him it is overly enthusiastic to come on board. "Reading between the lines, I think DSS wasn't sure that they were the ones to kick this thing off, but it falls under the law," Dupre says. "We are all tied together at the hip."

The original legislation was part of Blanco's 2005 policy package, had a slew of coauthors and faced no opposition. The governor described it as an "opportunity to add something substantial toâ?¦ prayers and support." It is modeled after a program launched by Illinois Lt. Gov. Pat Quinn, and there are similar initiatives in at least 14 other states. A dozen or more are considering legislation. In Illinois, the Legislature there jumpstarted its program with a $5 million gift and raised an additional $1 million through check-offs and corporate donations.

There was an effort by Sen. Joe McPherson, a Democrat from Woodworth, to have Louisiana match dollar-for-dollar what the fund raises annually, but it was shot down in 2005 amid talk of tight budget years ahead. Based on recent interviews and bills pre-filed for the spring regular session thus far, there doesn't seem to be any movement to dredge the topic up again.

It's shameful. If there were ever a year to spread money around ' strapped with a surplus and elections around the corner ' this is it. Money from candidates' campaign accounts can be channeled into the fund as well, which would be a wiser investment in Louisiana than negative television commercials.

Dupre says the oversight board will be discussing the hiring of a third-party administrator, possibly a nonprofit, at its April meeting. Whoever assumes the role, the administrator will be the group that actually awards the claims to military families who show a financial need. A commitment was made several months ago and it's time to pay up. "We should have been done with this by at least mid-2006," Dupre says. "This just should have gotten off the ground sooner."