Louisiana's gold standard' ethics reform has made it harder to collect fines from those who violate campaign-finance laws.

Louisiana's gold standard' ethics reform has made it harder to collect fines from those who violate campaign-finance laws.

The Louisiana Board of Ethics' most recent meeting in Baton Rouge was a busy one. About 35 items on the agenda - the bulk of the day's business - concerned requests by office holders, former candidates, political action committees and lobbyists that the board waive fines assessed against them, mainly for being tardy filing any of the myriad reports the state requires of those who participate in Louisiana politics.

From the Acadiana area, Washington Mayor Joseph Pitre and Police Chief Bruce Broussard, they of the unrepentant speed trap on Interstate 49, were denied requests that $1,000 fines against each be waived. The same was true for state Rep. Mike Huval of Breaux Bridge, whose $180 fine was upheld, along with St. Landry Parish Constable Ronnald Dugas' $1,500 fine.

For political rookies, Louisiana's campaign finance laws can be a mine field, and accruing thousands of dollars in fines is routine.

A recent analysis by newspaper chain Gannett finds that more than 340 current office holders and former candidates owe the state of Louisiana more than $1 million in fines for filing late campaign finance reports dating back at least to the early 1990s. Political action committees are on the hook for about $75,000, with the United Democratic Ballot Inc. out of New Orleans owing the most at $14,000.

Fines range from $40 per day for local offices up to $100 a day for statewide campaigns, with a cap at $2,500 per report. Consequently, candidates who file multiple reports late can generate many thousands of dollars in fines. But getting people to pay those fines isn't as easy as levying them - an issue that will have the Board of Ethics seeking a judgment in the matter in state district court soon.

"The question is, are [fines] collectable?" says Kathleen Allen, the board's chief administrator. After issuing a fine against an individual or political action committee, the board sends notification via letter that a fine has been levied. If the board receives no response by the deadline for payment, it may choose to seek a judgment against the violator in district court. For violations over $500, the board, based on a 2006 agreement, turns the case over to a special collections division within the state attorney general's office, which has an incentive to make the violator pay: The AG's office gets a 25 percent cut.

But not everyone is "collectible," as Allen puts it, meaning they may be hard to track down or not have the means to pay the fine. "If we are able to get to the judgment stage and have those hearings and give them the notice, if we get to the judgment ... some are in bankruptcy," Allen explains. 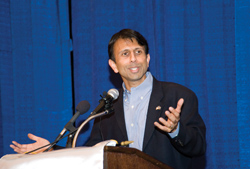 And here's where it gets complicated, and why many in Louisiana believe ethics enforcement is toothless when it comes to campaign finance: Gov. Bobby Jindal's 2008 "gold standard" ethics reform package created the Ethics Adjudicatory Board, a seven-member panel of administrative law judges under the auspices of the Division of Administrative Law. The EAB "conducts public hearings to receive evidence on facts alleged in formal charges brought by the Louisiana Board of Ethics and determines whether any violation of any provision of law within the jurisdiction of the Board of Ethics has occurred," according to the EAB's website.

But a recent court ruling in Baton Rouge threw into dispute which body - the ethics board or the EAB - has enforcement power over campaign finance fines that have gone unpaid. The Advocate reported recently that the EAB declined more than a dozen hearings for campaign finance cases citing a lack of jurisdiction. The EAB, according to the report, believes that unless a fine is appealed, it's not EAB's problem.

According to Allen, the ethics board will soon seek a declaratory judgment in district court in Baton Rouge hoping to settle the matter. "Where we are right now is, if there's not payment, who's conducting the initial hearings to obtain those judgments?" she says. "That's what will be pursued, to get that question answered."
In the meantime, collecting fines for campaign finance violations in Louisiana has come to a screeching halt.

In the backdrop of the enforcement problems with the ethics board and the EAB is that 2006 deal with the attorney general's office giving the AG a 25 percent cut on collections of outstanding ethics fines.

Yet even that is yielding mixed results. Al Donovan Jr. of River Ridge, a Democrat and former lead attorney in the Edwin Edwards administration who came in a distant second in the 2003 secretary of state's race against Republican Fox McKeithen, has yet to pay a dime on the $42,000 in fines he owes the board for several late filings. The same holds for Shreveport attorney JoAnn Gines, who accrued more than $23,000 in fines for a failed district-court judge bid way back in 1994.

But former Orleans Parish School Board member Jimmy Fahrenholtz, an on-again, off-again candidate for various elected offices who racked up a whopping $45,440 in fines - the largest amount according to our review of board records - for failing to file or filing late in races in 2000 and 2004, has entered into a payment plan with the board. To date, according to the board's website, Fahrenholtz has paid about $15,500 of his obligation, leaving him still with an almost $30,000 tab.

Fahrenholtz, in fact, was disqualified by a New Orleans judge for failing to indicate on qualifying papers in the 2008 race for the 2nd Congressional District that he had an outstanding debt with the ethics board. The candidate challenged the disqualification and the judge did agree with his argument that a state ethics fine doesn't bar a candidate from seeking federal office, but she still banned him from the ballot for lying on his qualifying papers about having an outstanding debt with the board.

In the five years since the AG has served as a collection agency for ethics fines, according to Gannett, nearly 130 cases totaling more than $520,000 in fines have been processed. Almost half of that amount - about $242,000 - has been collected, and 49 of the 130 cases have been paid in full.

The majority of individuals on the board's list of outstanding fines are candidates who lost elections, some of whom face fines that are larger than the amount they spent on their failed campaigns. Short of some tough measures by the state, and a resolution to the squabble between the board and the EAB, many who owe fines no doubt see little value in shelling out big bucks in fines for their vain twirls in the political arena.

But for those in office, or for former candidates facing fines and seeking to re-enter the political sphere, the ethics board has a new tool at its disposal. Jindal signed into law this summer a bill that now requires candidates to have paid their ethics fines in full before they can qualify to run for office. Previously, a candidate could enter into a payment plan with the board and then qualify, but as Allen pointed out at a House committee hearing this summer, many of those candidates who owed fines and entered into a payment plan in order to qualify, particularly those who lost their respective elections, simply walked away from the payment plan after the election.
For the Oct. 22 election, the new law will affect only one candidate in Lafayette Parish, according to our review of outstanding fines: Stephen Ortego, who recently announced his campaign for the state House District 39 seat and who owes a $780 fine related to his failed bid for the same seat in 2007.

[Correction: This story originally indicated, and still does in our print issue, that Lafayette City-Parish Councilman Brandon Shelvin owed $1,900 - of an original $2,000 fine for filing a late supplemental report connected to his 2007 campaign - to the Ethics Board. Shelvin paid the balance of his fine on Aug. 4, during the writing of this article but after we had spoken with Kathleen Allen.]

Yet the new law hardly placates critics of Jindal's ethics reform package. Shreveport demographics consultant Elliott Stonecipher, an outspoken critic of the ballyhooed "gold standard," calls it a " deliberate wrecking of ethics law enforcement" and a "gimmick" designed to burnish Jindal's image during "the then-underway hustle for the Republican Party's 2008 presidential campaign ticket."

In a recent email to members of The Independent's editorial board, Stonecipher goes further and deeper in his analysis of the 2008 ethics reform process: "Notably, several of the legislative leaders' on board to eviscerate ethics enforcement had serious ethics violation cases against them which were under investigation at that time, but any public mention of that fact was illegal under state law. Literally, these leaders' were writing and passing laws which would specifically protect them when their cases reached any such point of need.

"All of the worst predictions have now come to pass. Our ethics administration has, effectively, ceased functioning. Louisiana is now in a far worse position to police ethics laws than at any time since their 1960s origin. Such is Jindal's legacy, whether he rushes off to some new job tomorrow, or hangs around for another term as governor."