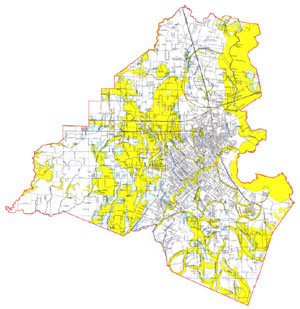 The new, long awaited FEMA Flood Insurance Rate Map, which dictates flood zones for Lafayette Parish, has been released in a preliminary draft to Lafayette city-parish officials. Updating a 1996 map of the 100-year flood zones in Lafayette Parish, the new digital maps and accompanying software are considered more accurate and will affect insurance costs and future development in the parish.

Flood zone changes pepper the map, but the most significant difference is in the eastern part of the parish, south of Duson. What was once nearly a solid flood zone bordering Vermilion Parish has largely been removed from the flood plain. The entire town of Duson has been removed from the flood zone, which should lower residents' insurance rates. Duson Mayor John Lagneaux wants to make sure the maps are correct. "Don't get me wrong, we're glad, it will save on insurance," he says. "But there are some areas that we know of that need to be in the flood zone; we plan to shoot elevations, get with the people who work with the [Army Corps of Engineers] and make sure. If you live in a low-lying area, it needs to be a flood zone. If we're going to do it, we need to do it right."

Youngsville Mayor Wilson Viator has the draft map pinned to his meeting room wall. Last week, he studied the map and pointed out several changes to his town. "The intersection of Verot School Road and Hwy. 92 is more in the flood zone," he says. "But the map takes the heart of Youngsville out. Toward the east, and toward Le Triomphe, especially along Lasalle Coulee we're seeing increased areas in the flood zone."

Broussard Mayor Charles Langlinais is concerned that the new flood zones will stunt the booming growth of his town as development marches down Hwy. 90. Langlinais intends to challenge the map during the window of response time allowed by the Corps, which performed the studies for the FEMA map. He also wants to be proactive and alleviate flooding in newly identified zones before it happens. "What I want to do is go to my council, and if we can change out the pipes under bridges and road crossings where there are bottlenecks and get the water moving faster, then we can fix the flooding and get out of the flood zone," he says. "Anybody that's in an area like that I would advise them to buy flood insurance. But we can minimize the impact in how much insurance they will have to buy. I warned that there would be people in flood zones, but I was a little shocked about all the yellow in south Broussard."

Changes in flood zones will be reflected in homeowners' flood insurance premiums. According to Knox Insurance account manager Brenda Ortego, homeowners who live in non-flood zones are eligible for preferred programs that carry much lower rates. And the flood zones have different rates. "The higher the risk for flooding, the higher the premiums go up," says Ortego.

In conjunction with the maps is a comprehensive drainage study, the result of an intergovernmental request to the Corps in 2005 from Lafayette Consolidated Government, the Bayou Vermilion District and the five municipalities in Lafayette Parish: Broussard, Carencro, Duson, Scott and Youngsville. Lafayette experienced flood events in 1980, '89, '91, '92 and most significantly in January 1993. "We were trying to look at the high water marks and figure out what actually happened," says LCG Public Works chief Tom Carroll. LCG contracted jointly with the Corps and FEMA to develop the study for the Lafayette In a Century Drainage and Stormwater Plan. The Corps was commissioned to provide the field data, which was then incorporated into the flood maps. The draft FEMA maps were unveiled March 23 at a meeting of the Committee of Governmental Officials in Youngsville.

Carroll warns that the current versions of the maps are preliminary drafts for government officials to check before they are released for public comment on May 31. (The comment period is one year, through May 2007.) But Viator says he was informed at the March 23 meeting that the maps are 95 percent complete.

The old 1996 maps were based on USGS maps from the 1940s, with contour lines figured at 5-foot intervals. FEMA's new maps were made by flying over the parish, using Light Detection and Ranging Scanning. The rapidly emerging technology is highly accurate for determining the shape of the ground surface plus natural and man-made features. "We're really excited about their accuracy," Carroll says. Lafayette is only the second parish surveyed by LIDAR (Orleans was the first), and the technology will provide a benchmark for maps in the future.

Software for determining potential changes made to watersheds is part of the drainage and storm water package that will accompany the map. "We will have the information for modeling hydrologics," Carroll says. "We can see the overall impacts of any development. Right now we don't have good models of our channels. It will provide tremendous information for the local engineers. It takes out the guesswork. No more confrontations with developers." LCG Planning Director Mike Hollier says the parish will also use the plan to simulate recent flooding in Broussard and Carencro. "We're going to simulate those rainfall events in different parts of the parish and see what might happen on top of downtown Lafayette, or Scott. That's the great part of the drainage plan. If you make improvements you might be able to take areas out of the flood zone."

The biggest change under Carroll's jurisdiction comes in the Coulee Ile des Cannes area, where flood zones increased. "We're going to have to look at that one closely," he says. "The improvements made from the Vermilion River to Ridge Road have made a tremendous difference in flooding in that area. We'll address that during the comment period."

Youngsville Mayor Wilson Viator says the maps will increase government efficiency and guide future development. "It will save Youngsville money because my town engineer won't have to go shoot as many elevations," he says. "It will make it much simpler to tell developers what they have to do." Like Broussard, the town of Youngsville has also witnessed extraordinary expansion recently, and with it growing pains from increased traffic as well as a need for complex drainage studies as low-lying farmland is transformed into subdivisions.

Viator adds that whether homeowners are located in or out of the flood zone, he still suggests residents of Youngsville buy some flood insurance. With the damage hurricanes Katrina and Rita have done to the wetlands and the subsidence of Louisiana's coastal plains, there's a greater potential for flooding. "If we get a storm surge, we have a good chance of getting water in Youngsville," he says. "I just bought flood insurance. I'm not in the flood zone, but I'm not taking a chance. If you have flood insurance, you can sleep good at night."