BEING FLAKY CAN BE POSITIVE
Phyllo dough is the whisper-thin, flaky pastry popular mainly in Mediterranean cuisine, although it makes forays out of its native land. Working with phyllo is like working with an edible cellophane, and it is notoriously difficult to the unseasoned pastry chef. Not so for Petticoat Pastries. 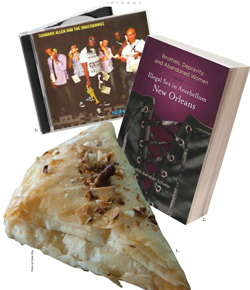 BEING FLAKY CAN BE POSITIVE
Phyllo dough is the whisper-thin, flaky pastry popular mainly in Mediterranean cuisine, although it makes forays out of its native land. Working with phyllo is like working with an edible cellophane, and it is notoriously difficult to the unseasoned pastry chef. Not so for Petticoat Pastries. PP and its mastermind, Amanda Malone, were written up here a few weeks ago for the Pink Lemonade Cake at Carpe Diem downtown. Well, we're back at it again after so many reports of this new creation. Now this goat cheese turnover with a honey almond glaze is fast becoming the de rigueur staple for the coffee fiends at Carpe. Light and tangy with the barest glimpse of sweet, it's filling enough to start your day and delicious enough to get you out of bed. $2.29  - Anna Purdy

BOOK OF BROTHELS
Early French Colony New Orleans wasn't exactly known for its ability to attract a great number of fair ladies, especially not after King Louis XIV released all those pretty women and other convicts from Paris's La Salpêtrière prison in 1721 and shipped them over to the blooming Crescent City, where they relied on the only practice they knew: selling themselves. In Brothels, Depravity, and Abandoned Women: Illegal Sex in Antebellum New Orleans, author Judith Kelleher Schafer recounts the veiled history of prostitution in New Orleans until the Civil War by frisking through case studies from the annals of the First District Court of New Orleans. The book also profiles several of New Orleans' most notorious courtesans and covers subjects like the amount of violence against and among concubines, sex across the color lines and the city's impotent attempt to suppress the "oldest profession." Find it at lsupress.org for $32.50 or keep an eye out for the paperback edition due out in November for $19.95. - Wynce Nolley

HELLO, HIP ROCK
You're swinging some serious jewels when you use your telephone number as the title of your album, but that's apparently what New Orleans trumpet player and band leader Shamarr Allen did on his most recent record, although dialing the number brings one to a generic voicemail. Emerging from the New Orleans jazz scene but attuned to many genres - Allen has toured with Willie Nelson, recorded with R.E.M. and performed with Lenny Kravitz - the trumpeter and his band, the Underdawgs, blaze new trails on 504.799.8147 (P.O.M.E. Music Group), incorporating hip-hop, funk, rock and jazz into a genre Allen calls "hip rock." The melodies are clever, the hooks are infectious and Allen's trumpet burns a hole in our expectations about how New Orleans trumpet playing should sound, blowing brass through effects and using a guitar amp to give the instrument a blazing, electric-guitar quality. And in a nod to radio pop, there's even some Auto-Tune on the vocals. With unexpected surprises in almost every song, 504.799.8147 is on sale for $12.99 at LouisianaMusicFactory.com. - Walter Pierce