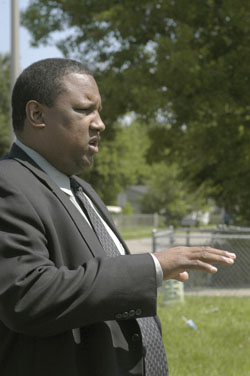 Former Lafayette City-Parish Councilman Chris Williams has filed suit against the Lafayette Housing Authority seeking back wages, penalties and attorney's fees. The suit, filed late last week in state district court in Lafayette, accuses the LHA of breach of contract between the federally funded housing agency and Williams' non-profit Lafayette Training and Career Development Center, Inc., which was hired in January of 2008 by the LHA to provide training to Hurricane Katrina evacuees through the federal Disaster Housing Assistance Program.

Williams, through the LTCDC, was initially hired at a rate of $16.08 per hour working 80 hours bi-weekly for a $1,286 paycheck every two weeks plus a $300 car allowance. The contract was renewed in December of that year to extend until March 31, 2010, increasing Williams' hourly take to $30 and his bi-weekly paycheck to $3,260 - this while Williams was working a full-time job in the Special Services Department at UL Lafayette.

Williams' herculean work load - simultaneous "full-time" jobs - was brought to light as a result of an independent audit on the LHA, an audit that led state and federal officials to investigate DHAP. In August of 2010, as the LHA saga spiralled out of control - its top executives would soon resign their positions amid intense federal scrutiny and unflattering media coverage - the agency terminated DHAP and canned Williams.

Williams claims in his suit that in the spring of 2010, the LHA extended DHAP through October of that year and that Williams "consented to the extension and Williams and LTCDC continued to provide case manager services for LHA," according to the suit, although the lawsuit makes no claim that Williams and his non-profit had a contractual relationship with the housing authority beyond March 31, 2010.

Williams cites a clause in the contract with LHA stipulating that the housing agency was required to give him 30 days notice for terminating the DHAP contract.