Wednesday, August 17, 2011
By Heather Miller
Photos by Robin May

Mismanagement at its Abbeville treatment facility and the evaporation of outside funding sources have left Acadiana Outreach Center reeling. 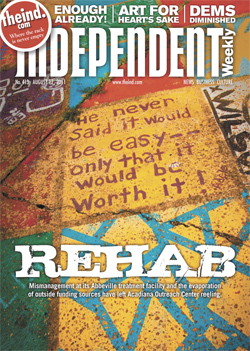 Wednesday, August 17, 2011
By Heather Miller
Photos by Robin May

Mismanagement at its Abbeville treatment facility and the evaporation of outside funding sources have left Acadiana Outreach Center reeling.

Newly appointed Acadiana Outreach Center CEO Jill Meaux is no stranger to the organization that's been serving homeless and drug-addicted clients in Lafayette for 20 years.

Hours into her new top post, the former community relations director for Outreach was tasked with laying off half of the agency's employees whom she had worked alongside for almost two years. 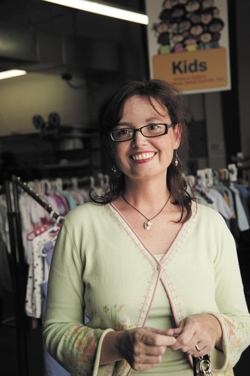 Meaux's sudden move to the top of the Outreach ladder is indicative of the agency's problems. While not insurmountable, it is a painful and rugged hole from which to climb out.

Like many nonprofits, an unstable economy and continued cuts in state funding over the past few years have hit close to home at AOC, one of the largest private nonprofits in the area. The downward funding trend created a need for more steady income, one that wasn't overly reliant on charitable donations and government grants, according to Outreach board member Rob Robison. The brainchild of that notion was Three Graces, AOC's 75-bed alcohol and drug addiction treatment center in Abbeville.

"The goal was for it to be a positive cash flow that would support our traditional mission, which is addressing the root causes of homelessness," Robison says.

After a national search for a new CEO, the board in January 2010 hired Rick Newton of Little Rock, Ark., to head the outreach center and its pursuit of a profitable treatment hospital. Before joining AOC, Newton spent 30 years working with recovery patients in a clinical setting.

The plan was for Three Graces to take in a mixture of both traditional Outreach clients and patients with their own health insurance or other means of paying for treatment.

Market surveys commissioned by the board showed the project to be a viable vision, prompting AOC to lease a former nursing home in Abbeville and begin the conversion process into a full-fledged treatment facility. Its opening was nine months later than planned due to permitting delays and other factors, but Robison says the volunteer advisory board for AOC had no reason to believe the project wasn't coming together as planned. 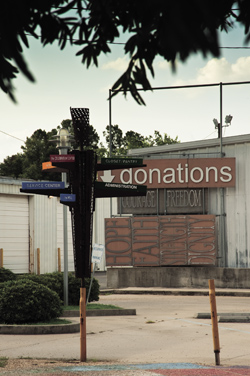 to believe there would be a patient population; once the doors were open it would be populated," Robison says. "In reality that just didn't happen. They were overly optimistic all along. Until mid-June, we were under the impression that everything was fine. Once it was made clear to us that this wasn't the case, we became more actively involved to get a clear reading of the whole situation."

By mid-July, the board learned that Three Graces wouldn't be self-sustaining for at least another six to eight months. It was a dire outlook for a nonprofit with limited resources.

"The budget only allowed us to carry it for a fixed amount of time," Robison says. "We had to shut it down. There was really no other option."

The patients who were residing at Three Graces have since been transferred to Lafayette. Meaux says the clients are still receiving the same recovery services that the nonprofit agency's been offering since its inception.

"They're just not getting them at a nice, big, beautiful facility in Abbeville," she says.

But the 15-16 months of pouring money into a facility that never came to fruition has had a ripple effect on AOC's operations here at home.

In addition to slashing the agency's staff in half from 20 to 10, AOC is temporarily scaling back some of its services. The Recovery Action Center, where people in need can stop in during the day to shower, use the phone or to wash a load of laundry, is no longer staffed full-time. The action center, along with the Well-Mart clothing and food donation center, will only be open on Thursdays unless volunteers come in to donate time. 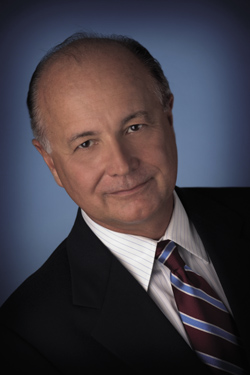 Despite the setbacks, critical services that the agency provides to the under-served in Lafayette are still moving forward. The AOC school supply drive concluded recently with 250 children receiving full bags of materials they need to kick off the school year.

"It's those things that make my heart happy," Meaux says. "There are many businesses in the country right now going through economic challenges, as are we. We've had to downsize our operation, but we hope that soon we'll be able to get back to full speed. The board has worked tirelessly to make sure we're still here working on our core mission, and we are committed to that, committed to continuing the services to the addicted and the poor that we've always been committed to."

Board members have even dipped in to their own pockets to help out. Robison explains that board members give hefty donations to the agency every year through its annual fundraiser, Palates and Paté. The yearly event is months away, but some board members have already stepped up and given their $10,000 donation to help cover payroll and day-to-day needs.

"We haven't had much time to do anything but react, a kind of triage if you will," Robison says when describing the past few weeks. "We've been identifying problems and seeking solutions. It's like drinking water out of a fire hose right now."

The board hasn't found any evidence of theft or abuse of funds, though Robison says they've discovered "a fair degree of sloppiness" in reviewing the program's management. Robison declined to be more specific because the issues deal with personnel, he says.

"The whole rationale for bringing Rick on board was to run the facility, so we told him we couldn't work with him anymore," Robison says. "The whole reason for this was to counter the funding and grant cuts. Now we're back to the reality of continued cuts in Baton Rouge."

Since news spread about AOC's financial overhaul, the community has raised questions about the potential impact on Joie De Vivre, a six-building, $16.5 million mixed-use, affordable housing development near downtown that's expected to break ground in September and be finished next year. The project has received mixed reactions from community members. Though most have spoken out publicly in favor of the project, some Mills Addition residents have concerns about the project's potential impact in their neighborhood. AOC's operations have been scaled back.

"Our detractors in the neighborhood were detractors even before Joie De Vivre," Robison says.

The Joie De Vivre plans remain intact, and Robison says the completion of the project and developer's fee - approximately $750,000 - that AOC will receive from it will be a key factor in the agency's reopening of its scaled-back services. Meaux is quick to point out that although housing applicants must meet income requirements to be accepted into Joie De Vivre, there is no limit on how much money residents bring home once they're living there.

"It encourages people to work and make more money. They're nice apartments. They're safe apartments. To live there, you have to pass a drug screen, have to pass a credit check, have to pass a background check. You have to be able to pay your rent. Economically, it's a redevelopment of, in my opinion, some pretty ugly lots," Meaux says. "It's an urban feel where cooks, and bank tellers and artists and waitresses who work downtown can live downtown and afford to live downtown. That's part of our mission. It's helping people get sober, housed and employed."

Just like the critical services offered by Outreach, Meaux says Joie De Vivre is "a wonderful project, something our community needs."

And just like the countless Outreach clients who have hit dire financial straits at least a few times in their lives, the nonprofit that's helped them for so long is facing its own rehabilitation, one that started in disappointment but will, according to plans, rebound to the service level Outreach was achieving before Three Graces disgraced the agency's day-to-day work.