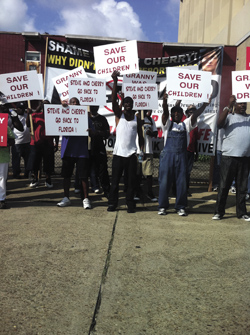 We've been loath to address Glenn Stewart's clumsily orchestrated and continuing campaign against us in the month since we published "A Black Heart of Revenge," our response to his personal attacks against Independent Co-Publisher Cherry Fisher May in billboards scattered around Lafayette. We've remained silent, bitten our tongues, assumed he would get it out of his system and this melodrama would dissipate like a hurricane in the jet stream. But it didn't. In the month since "Black Heart," with no further mention of him in the pages of this newspaper, two "protests" have been staged against The Ind and the billboard campaign has evolved and expanded, and that's just the publicly visible aspect.

We're not even sure how many billboards remain in commerce; they are now just background scenery in a wider profusion of stage properties he has erected to block his view of the truth: that he got caught with his hand in the proverbial cookie jar - exploiting a tax loophole - which we pointed out to a community that calls him a native son.

Indeed, it is an exercise in futility trying to make sense of the senseless, to rationalize the irrational. But we can place it in context, and we can expose for our readers the depths of his bizarre, obsessive behavior, to make them aware lest they encounter him unawares. It is the least and the most we can do. A prosperous, disgruntled commercial real estate developer reaching into his very deep pockets to wage an expensive, public and personal campaign against a publisher because her newspaper cast him in an unfavorable albeit truthful light is news. We're reporting it.

In his most recent communication with this paper - via a cease and desist letter hand-delivered by an employee to our attorney on Thursday - Stewart demands that we "refrain from publishing false statements about [him] in the future and from publishing any statements that directly, or by implication or innuendo, portray [him] in an unflattering light."

The first part of his demand we've met all along. As for the second, we'll let our readers be the judge. 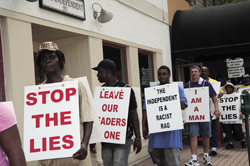 THE LADY DOTH PROTEST TOO MUCH WETHINKS
Last Tuesday, Aug. 9, around midday about two dozen "protesters" marched up and down the 500 block of Jefferson Street downtown in front of The Independent's office, braving the summer swelter. The titular head of the procession was "Sister" Kadijah Rashad, an obscure "civil rights" activist who bears a grudge wider than the Congo River Delta against the melanin-deficient and whose racial grievances must surely corrode her viscera. The "demonstrators" bore signs that read, "The Ind is a Racist Rag," "I Am a Man," "No Ind on the Northside"  and so on. You get the drift.

After the roughly two-hour exercise in democracy - oddly quiet for a "protest" as none of the marchers including Rashad chanted a slogan or was willing to expound on their collective resentment when I engaged them; it was a dull, plodding affair - the cavalcade marched off into the shimmering heat. The "protesters," some of whom are residents of nearby homeless shelters, were each paid cash and a plate lunch for their service - and according to a reliable source, that payment was in the form of $50 bills.

Not coincidentally, at least two of the "protesters" were part of a strikingly similar "demonstration" exactly one week earlier in front of City Court - a "protest" featuring an identical type of professionally produced sign with the same fonts and color schemes. The major difference is that the City Court "protest" targeted Cherry Fisher May, who, it's worth noting, has never met Stewart, has no role in this newspaper's editorial coverage and is one of the most down-to-earth, giving and charitable people in Lafayette. The signs read "Granny was Drunk" and "Save our Children." The piece de resistance at this earlier protest was a large and no doubt very expensive vinyl banner that mimics those billboards for which Stewart paid thousands of dollars to harass May.

It is ghastly yet sadly understandable that the poor and the homeless could be rented for such nefarious service, enticed with smothered chicken and crisp, green portraits of a long-dead Ulysses Grant. We bear no ill will toward them.
In last Wednesday's Daily Advertiser, Stewart owned up to organizing the City Court "protest" - a business owner on the 300 block of Jefferson actually spotted him or someone bearing a striking resemblance coaching the "protesters" before dispatching them to the courthouse - but he claimed no role in the "demonstration" held last week. 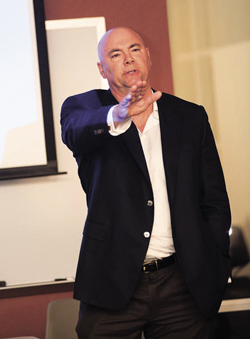 IDENTITY CRISIS
In the immediate aftermath of "A Black Heart of Revenge," Stewart attempted to post to the comment section on-line for the story a "response," which we blocked because it's overfull with lies and misrepresentations. That same response has been published elsewhere, including as a PDF on the website for Parc Lafayette, Stewart's ambitious retail center going up on Kaliste Saloom.

A few times these impersonations slipped through our very human staff filter and made it onto our website, although we later removed them. Some of them remain because, although critical of The Ind, they meet the criteria we use for approving comments, and criticizing this newspaper is certainly not prohibited. One of Stewart's most recent comments - to a Tuesday, Aug. 9 blog about the Jefferson Street "protest" - was tendered under the screen name "you ain't seen nothing yet." We approved it and allowed it to post to the comment section not an hour after the "protest" had ended - the "protest" in which Stewart claims to have had neither knowledge nor a role: "and next week we are going to start protesting businesses that advertise in your scum tabloid," his comment reads. "If I was you I would warn them, because if you don't warn them, they may be even madder at you than they are gonna be, and I think that your failure to warn them will let them out of any contract they may have.

Although we were slow on the uptake, we identified Stewart's subterfuge through the kind of rudimentary Internet forensics that IT students learn in their first semester. Embarrassingly easy.

It seems clear Stewart had a dual purpose in this tactic: to get his opinions onto our website and, more important, to create through the illusion of multiple "readers" the false impression that he enjoys support in our community.

The afternoon of the Jefferson Street protest I also received a sarcastic email from Stewart thanking our paper for the publicity - an email that contained libelous accusations of criminal wrongdoing by an Ind staff member.
These electronic communications - the email, the multiple comments posted under various screen names - may be Stewart's undoing. Among the criteria delineated in state law for defining cyberstalking is electronically communicating "to another and to knowingly make any false statement concerning death, injury, illness, disfigurement, indecent conduct, or criminal conduct of the person electronically mailed or of any member of the person's family or household with the intent to threaten, terrify, or harass..." 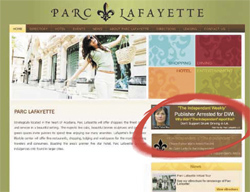 The home page for Parc Lafayette

MIXING BUSINESS AND PLEASURE
As most of you know by now, the genesis for Stewart's grudge against The Independent can be found in our April 6, 2011 cover story, "Green Acres," a roughly 3,000-word investigative piece in which about 340 words are devoted to Stewart's Parc Lafayette commercial development under way on Kaliste Saloom Road, and specifically to how he used an easily exploitable state property tax law to pay virtually no taxes on land he purchased through his corporate arm for about $7 million. Parc Lafayette is an ambitious project that, if successful, will make Stewart a lot of money and, honestly, will be a welcome addition to Lafayette's retail and hospitality landscapes.

Believe it or not we remain hopeful, in spite of all, that Parc Lafayette will succeed.

In "Green Acres" and in subsequent reporting we have exposed several other Lafayette land owners for exploiting the tax loophole, a loophole that is egregiously unjust and unfair to the rest of us who don't have access to such an absurd means of avoiding taxes. None has leased a billboard or rented poor people for "protests." None but one.

Stewart has gone so far as to use the home page for the Parc Lafayette website- the home page! - as another theater in his war against Cherry Fisher May and The Independent. Until last week, right there beside a paragraph extolling "Lafayette's first outdoor lifestyle center" was a small ad with Cherry's photo in it. It was essentially a condensed version of the original billboard. Beneath that was another ad titled "How independent is the Independent'?" containing links to three PDFs - ad hoc, ad nauseum.

Some of you, no doubt, will accuse us of baiting Stewart, of stooping to his level. That's not what we're doing. What we've done and what we'll continue to do is report a wrong that needs righting - exploitation of the ag tax loophole - and we're refusing to be intimidated or bullied into backing down on a story that Glenn Stewart and every thinking person in this city knows is true. Paying less than $50 in property taxes on a $7 million tract of prime real estate is outrageous.

We stand by our story. Glenn Stewart needs to quit whining, pointing the finger at others and get over it.

We won't hold our breath.