For more than five decades, Mike and Andrée Stansbury have enjoyed a passionate love affair - with each other and with their art. By Anna Purdy

In this world of mawkish sentimentality - think Anne Geddes or Thomas Kincade - modern art can feel sterile and unmoving. This isn't so of Mike and Andrée Stansbury's work. Minerals, woods and everyday synthetics like aluminum are twisted, chiseled and molded until they speak. "The only difficulty," says Andrée, "is knowing when to stop."

For more than five decades, Mike and Andrée Stansbury have enjoyed a passionate love affair - with each other and with their art. By Anna Purdy 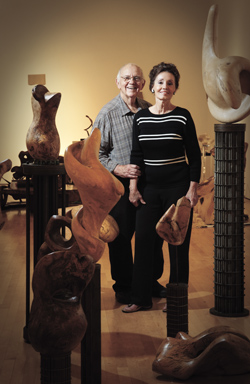 In this world of mawkish sentimentality - think Anne Geddes or Thomas Kincade - modern art can feel sterile and unmoving. This isn't so of Mike and Andrée Stansbury's work. Minerals, woods and everyday synthetics like aluminum are twisted, chiseled and molded until they speak. "The only difficulty," says Andrée, "is knowing when to stop."

"ArtAffair" is a 55-year retrospective that opened Aug. 13 in the main gallery of the Acadiana Center for the Arts and runs until Oct. 13. It is a visual story of two artists' work and lives together, and it all started when a girl from New Orleans met a boy from Abbeville and they both liked each other as much as making art. "ArtAffair" is the title the Stansburys picked because it is the most simple way to describe several decades of being in love, both with each other and their work.

Andrée is a stunning woman, tiny with strong cheekbones and a quick mind, and when you see one of the works hanging in "ArtAffair" you realize she doesn't look much different than the young teenage girl who drew it. Andrée has been working as an artist since elementary school when, after a classmate's challenge that she couldn't draw, other kids started paying her for their own portraits. Despite getting into a bit of trouble with her parents for that incident, she wasn't dissuaded. She grew up to attend Newcomb College and study under Jules Struppeck, paving the way to her life as a modern artist, making the usual unusual and unique.

Mike, meanwhile, grew up to study at what is now UL Lafayette, majoring in business administration and the liberal arts, but he never gave up his dream of being a sculptor. The family line, in Mike's case, wasn't art but beer. The Stansbury family was a very successful Schlitz beer distributor, a line of work that would strangely dovetail with their artistic careers. In 1956, Mike and Andrée married and opened Mike Stansbury's Health Club where they taught fitness as Mike furthered his hobby in weightlifting. They also employed a young bodybuilder named Red Lerille who went on to open his own club. During this time the couple attended art classes and worked together making sculptures, one of which is two tons of cast concrete that is still on their property.

There are two pieces in ArtAffair that Andrée refers to as "the squid" - aluminum, poured and stretched and resembling two squids pulsating across the wall. "We were diving in Mexico, and I got separated from Mike, who was searching for one of those huge manta rays. Anyway, this school of squid came by me and stopped right in front of me. They were so curious. The colors were simply beautiful. I've never forgotten it." Much of the Stansburys work seems to have an aquatic bent. One large wall pieces looks like green coral drifting over the wall. Other pieces, even without resembling sea life, have a very easy and natural flow and wave to them.

It's pretty difficult to describe what the Stansburys have created. There is a lot of it and it all varies so much that there is at least one piece of art every viewer will like -  burls of wood that have been shaped and chiseled, one into a chair and others into tables and sculptures, some left out in the elements to let Mother Nature try her hand at art, as well; incredibly detailed renderings of birds, life-size and ready to take flight; even bolts and wires twisted into forms. There are gorgeous naturalistic photographs, including a stunning portrait of a nude woman with waist-length black hair whipping sand into a frenzy with the air and her hands as catalysts.

Most of the work hasn't been seen outside of their home.

"It's seem so positive and everyone relates to it so well, but you never know with abstract art," Andrée admits. "Over 55 years we've worked with pretty much every medium. For us, everybody calls us artists. I've always considered myself an artist. One who creates something. But for us it's the pure enjoyment of working together and bringing something to completion. I think in the bio I was quoted as saying, The successful completion of a piece is pure joy multiplied by two because we share that joy.'"

"We have great confidence that the completion will satisfy us and if it doesn't we may continue to work on it but we never feel that we will never find a solution," adds Mike.
To remain married for 55 years is wonderful. To work together all that time is astounding, and when that work together is art it makes for something incredible.

Now moving into their eighth decades, the Stansburys still don't know when to stop. This retrospective is unique in that they are fairly determined to never do a large-scale exhibition of their work ever again, but they will still be around, working at home, finding burls and stones and metals that interest them, always being and doing what they love.