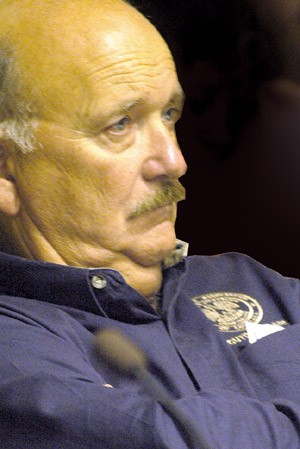 Speaking before a packed house at the Iberia Parish Council meeting last week, District Attorney Phil Haney assured the audience that the investigation into embattled Iberia Parish President Will Langlinais is far from over. Haney outlined a three-pronged plan, which the council unanimously ratified, to follow up on allegations of theft, malfeasance in office, obstruction of justice and falsifying public records brought to light in March by a legislative audit. The council is slated to begin its own investigation, for which Haney is now drawing up guidelines, into possible charter violations by Langlinais. Meanwhile, Haney is conducting a criminal investigation into Langlinais and says he will convene a grand jury within 60 days to take up possible charges against the parish president. Haney also is requesting the attorney general's office handle a civil proceeding to recoup squandered public funds detailed in the audit.

As Haney addressed the council, enumerating points with his pen in the air, Langlinais sat to his right slumped in his chair, frowning at what he has deemed a "conspiracy" and a "witch hunt." The parish president claims the audit, initially requested by four council members, was politically motivated. In particular, he has singled out Councilman Bernard Broussard, who is considering a run for parish president in the fall. Another councilman who initiated the audit, Ray Fremin, is running for state representative.

Following the council's vote to begin its own investigation, Langlinais delivered an impassioned three-minute speech that ended in what some council members regarded as an attempt at intimidation. "Is this a two-edged sword?" Langlinais asked Haney. "There are some possible improprieties by some council members ... some issues not discussed in the audit ... that I feel I should have the opportunity to address."

"I felt he was throwing us a threat out there," says Councilman Glen Romero. Haney directed Langlinais to bring his information to the criminal investigation unit of the State Police. "I'd like nothing better than that," Langlinais replied as he abruptly left the meeting.

The Independent Weekly has since learned that Langlinais' threats are not limited to elected officials. Last week, parish employees brought claims of intimidation by Langlinais to council members and Haney. Several sources in parish government confirm that multiple parish employees are worried about the security of their jobs. Citing an environment of harassment and intimidation, the council directed Haney to appoint an attorney who will be available to employees who feel they are being intimidated.

"We're trying to prevent [Langlinais] firing employees," Assistant DA Eric Duplantis says. "It would result in another series of problems. It's important that the day to day work of the parish be done while this whole commotion is going on."

Following receipt of the state audit in March, Haney's office subpoenaed all 1,800 pages of the report's background documents from the legislative auditor's office, including the interviews with council members, parish employees, parish contractors and Langlinais. Haney's office then brought in investigators from the state police who are retracing the footsteps of the auditors. According to Duplantis, the state police will "reinterview a substantial amount of the people who were interviewed by the legislative auditor to see if their experiences are consistent."

Duplantis explains that the auditors were looking for budgetary violations, but the DA's office has a different role. "The legislative auditor may stop at some point and can't go further. We can't do that. Once you start asking people questions you don't know where it's going exactly. If we're talking to someone and they tell us multiple pieces of information, we can't stop; we have to go wherever the evidence goes. We don't know for sure, but we believe we'll be in a position to take to the grand jury the results of the investigation by our office and the state police. At that point the grand jury decides if there's sufficient evidence to bring criminal charges."

Recovering the public's money is a council priority; the audit detailed lost revenues to the parish from 2000 and 2006. Langlinais received $26,918 in meal and hotel reimbursements while he was also collecting a per diem from the parish and the Police Jury Association, for meals and hotel stays in advance. Between 2002 and 2005, the parish public works department provided at no charge to parish residents, including Langlinais' daughter, approximately $156,707 in pipe, dirt, gravel and labor. The audit also found that attorney Shane Romero was paid $35,250 in undocumented retainer fees from an oral contract between him and Langlinais (plus $343,879 through the parish's risk management fund during part of the contract's duration), and $4,785 in duplicate invoices for his services. Romero is the son of term-limited state Rep. Errol "Romo" Romero and is running for his father's seat in the Legislature. Additionally, Langlinais used $8,825 of public funds for donations, employee luncheons, tickets and charity donations.

All told, Langlinais could be responsible for reimbursing more than $500,000 out of his own pocket, according to Broussard. Under the terms of the charter, explains assistant DA Eric Duplantis, "if money is spent without proper authorization, the person who authorized it without the correct permission has to pay it back. So that action will be either through discussion with the person who owes the money or through a lawsuit." Haney is requesting help from the state attorney general's office, or if the AG is unavailable, another district attorney or outside counsel to assist the parish council in recovering this money. To date, Langlinais has paid back $1,895.46 to the council and $618 to the Police Jury Association. Shane Romero returned $7,912.46 to the parish, according to Iberia Parish Finance Director Kimberly Segura.

Since the March 5 receipt of the audit, council members have been in a quandary over how to proceed with the audit's recommendations to remedy potential charter violations. However, at last week's meeting they decided to begin the investigation contingent on Haney providing guidelines, which he says should be ready for the next regular meeting on April 25. Section 2-08 of the parish's Home Rule Charter has a provision for "investigations into the affairs of the Parish government and related conduct of any Parish official, officer, employee, department, office or agency and for this purpose may subpoena witnesses, administer oaths, take testimony and require product of evidence." While some council members were initially hesitant to take on the role of investigative body, the council unanimously voted to put the investigation in motion. "Congress does this all the time," Duplantis says. "But in this parish, nobody's done this before. There's no blueprint. And it's always hard to be the first to do something. I think they should be nervous about it."

While the council's inquiry will have a wide scope, an independent attorney will be appointed to prevent interference with the DA's criminal investigation. "What if they have a witness who is starting to talk about something that is clearly a problem?" Duplantis asks. "Do you Mirandize people? My feeling is when they are forming this investigative committee, an attorney would have to be part of the process, probably a prosecutor from the AG's office who is not part of our investigation, but who would know to say 'Stop, don't answer that.'"

Some council members have been waiting a long time for this process to begin. Broussard, for one, is ready. "If asked by my fellow council members, I have no problem chairing the investigative committee. There are things that I thought the audit would address that were not in it. Mosquito Control [Contractors Inc.] ' that was a contract I thought the audit would address. But it wasn't even mentioned. It's going to get very nasty. But if we don't finish what we're doing, it will set up a very bad business environment for Iberia Parish. We're at a crossroads. Someone needs to say enough is enough. This won't go away by not looking at it."