Beginning Monday tickets go on sale for The Roadkill Diner, the newest musical for Cité des Arts in downtown Lafayette. 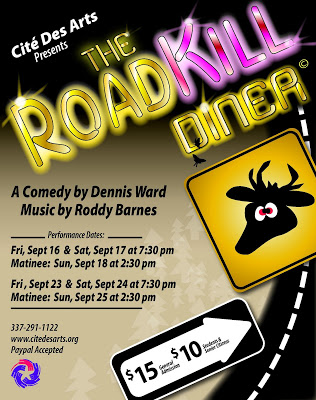 The Roadkill Diner is an original musical comedy written by Dennis Ward of Opelousas and featuring original music by Roddy Barnes. From early reviews it seems like a send-up of the Southern stereotype.

The play is set in the town of Buzzard Mountain and ruled over by Big Daddy Nutt, the patriarch who is hard to please. His only son, Dub Nutt, is a transvestite about to marry Annie Lu who is a waitress at The Roadkill Diner and the setting for their connubial vows. Big Daddy skips the nuptials to hit up the buffet at the Golden Corral, ingesting so much fried goodness his heart gives out.

The rest of the play takes place in the diner featuring Big Daddy's daughter, Ima Nutt (har har!) and "two nymphomaniac and criminal sisters, Teena and Teeta, plan to take over the diner and change it into a fine dining establishment, but their plans hit a wall once they discover that Big Daddy's estate left nothing and they are relegated to picking up fresh roadkill," as the press release says. Another Roadkill Cafe waitress named Connie Coffee is the sassy tongue that keeps the story and its characters grounded and in check.

While tickets go on sale Monday the play opens September 16 and runs for two weekends, the final performance being a matinée on September 25. Check out Cité des Arts online for show times and to purchase tickets.