COUILLON
When the League of Women Voters in Baton Rouge hosted a forum last week...

C'EST BON
The financial woes of Acadiana Outreach Center, hit hard by dwindling government funding, flagging contributions from the community and mismanagement at its Three Graces treatment facility in Abbeville, have been well publicized. Not getting the accolades they deserve, however, are AOC's board members, who have been frantically bailing to keep the boat sea-worthy, including dipping into their own wallets to make payroll and help the organization maintain some level of its vital services. As noted in last week's Ind cover story, "Rehab," several AOC board members have ponied up $10,000 each to keep the listing center afloat. We wish them smooth sailing in the nearest possible future. 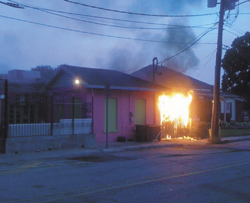 PAS BON
Downtown Lafayette's Tex-Mex dining quotient went from awesome to lonesome last Thursday night when flames erupted in the kitchen at Agave Mexican Grill & Catina on East Vermilion Street. As popular for its margarita-fueled nightlife as it is for its fish tacos and Extreme Burrito during the lunch hour, the eatery is now looking at a month-long stay on the injured reserve list. Thankfully no one was hurt in the blaze, which nonetheless inflicted heavy damage on the restaurant's nerve center. Agave is honoring outstanding party reservations at neighboring Trynd Italian Ristorante, but for at least the next month or so Agave will be out of commission. A speedy recovery to big-hearted owner Nidal Balbeisi and crew.

COUILLON
When the League of Women Voters in Baton Rouge hosted a forum last week to discuss the pros and cons of privatizing the Office of Group Benefits - a major player in health insurance plans for tens of thousands of state employees and their dependents - Gov. Bobby Jindal and his top lieutenants, who had been invited to defend their hair-brained idea, were conspicuously yet not surprisingly absent. The LWV left Jindal et al's seats vacant, complete with place settings and name cards, at the speakers' table, according to an account in The Advocate, and the LWV's Jean Armstrong even teasingly turned to those empty seats a few times seeking a response to the barrage of criticism over privatizing OGB, which is running a healthy $505 million surplus. According to Monroe's News-Star, the OGB board's vice chairman, Ken Kreft, recently acknowledged that four other states have contacted the agency to find out how OGB is maintaining such a robust surplus. But, it seems the Jindal administration is intent on remaining willfully ignorant of the concept that if it ain't broke, don't fix it.