Remembering one of Lafayette's great adventurers and philanthropists. 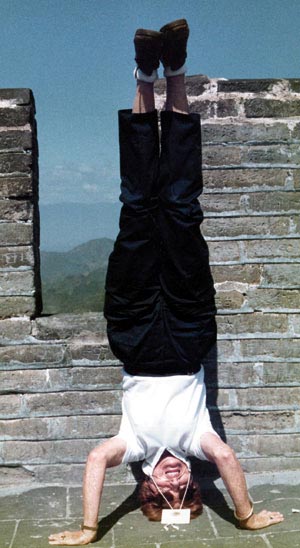 Some people spend all of their lives waiting for life to happen. Lulu Hilliard never waited.

On Thanksgiving Day 2005, a day before she was to turn 83, the exuberant, adventurous Lulu had done all she ever set out to do. She was born on Thanksgiving and celebrated her birthday on the holiday each year, marking one last milestone before she passed away last week.

Some years ago, Lulu's devoted husband Paul ran across a poem by Irish poet Thomas Moore, written to Moore's wife. It struck him as appropriate for Lulu, and he memorized it and recited it to her at Thanksgiving dinners.

Of all my happiest hours of joy,
And even I have had my measure,
When hearts were full, and ev'ry eye
Hath kindled with the light of pleasure,
An hour like this I ne'er was given,
So full of friendship's purest blisses;
Young Love himself looks down from heaven,
To smile on such a day as this is.
Then come, my friends, this hour improve,
Let's feel as if we ne'er could sever;
And may the birth of her we love
Be thus with joy remember'd ever!

Lulu sang and danced her way through life, and her smile could brighten a room in seconds. It's been said she knew the words to a thousand songs and scriptures, and she also had a passion for the opera.

Lulu loved art ' especially sculpture. In 1976 she was responsible for one of Acadiana's first privately commissioned public sculptures at 1001 Pinhook Road. She recently helped pave the way for the creation of the new Paul and Lulu Hilliard University Art Museum, donating $3 million toward construction of the building. She never intended for it to bear her and Paul's name; she was much too humble for that.

Lulu loved tennis. She won the Texas Ladies Championship at age 16 and later did volunteer work by setting up tennis clinics in disadvantaged neighborhoods in Houston. She was instrumental in founding the Houston Ladies Tennis Association, which today has several thousand members. As tennis coordinator for the Houston Parks and Recreation department, she would rustle up racquets from pros to auction off to raise money for the program. In recognition of her contributions and leadership, the HLTA holds an annual tennis tournament called the "Lulu Belle." When she moved to Lafayette, Lulu continued the charitable work, founding the Tennis Association of Lafayette Ladies.

Lulu loved to travel. And she was always excited to return home with her great pictures and even better stories, like the one about her riding an ostrich in South Africa and dancing with women in the Zulu tribe.

Lafayette banker Rusty Cloutier recalls a bank meeting shortly after the Hilliards returned from a trip to China. She leaned over and put her little red head on the ground and quickly went into a headstand to show everyone what she'd done against the Great Wall of China. "She had us in stitches," Cloutier says.

And that's just what she hoped to do. "It was her way of breaking the ice," Paul says, "especially if the people around her were too somber or serious to suit her happy nature." She did her headstands all over the world, in Moscow across from the Kremlin, in the Beijing airport "because we had flown from Moscow to Beijing with the Chinese girls volleyball team but on a miserable Russian airline, and everyone was dead tired," Paul remembers.

Lulu loved her husband and family. She had two sons and a daughter and was stepmother to Paul's four daughters. The extended family now numbers 51, including 21 grandchildren and 11 great-grandchildren.

She loved life, and she celebrated it for 83 years. Lulu Hilliard taught us to live life to its fullest and do a few headstands along the way.