In the "Best Small Town for Food," Saint Street Inn is right at home.
By Anna Purdy

In the "Best Small Town for Food," Saint Street Inn is right at home.
By Anna Purdy

After years of writing about food and drinks, Mary Tutwiler and Nathan Stubbs decided to put their money where their mouths had been and open a restaurant. Their Saint Street Inn officially opened Aug. 16.

Bonnie Bell's stood here for several years before adjourning to downtown Lafayette. This spot has hosted a few other restaurant ventures since Bonnie's but none has been as crack-off-the-bat successful as Saint Street Inn, located on Brook Avenue just a stone's throw from UL Lafayette. Named for South Louisiana's Catholic heritage, the Saint Streets have become a de facto neighborhood in Lafayette known to everyone - and Saint Street Inn is about to be its anchoring hub. 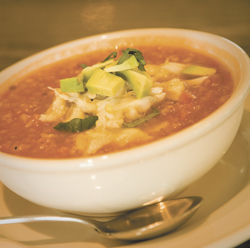 Co-owners and Independent alums Stubbs and Tutwiler decided earlier this year to open the kind of restaurant they craved themselves. The food is provided by local purveyors and farmers, right down to the beef from a farm in Eunice. The small bar is cozy with Louisiana beers on tap and a wine menu curtailed to complement the food menu's choices. The porch has a lot of seating with fans mounted for the hotter times of the year. Saint Street Inn is a casual dining bistro, so you don't have to get dressed up to go. You don't need to feel prompted to order food to be there - you can sit at the bar or lounge outside and have a few drinks after work. According to Tutwiler, plans are to change the menu in accordance with the season to ensure the freshest foods. One glimpse at the menu proves her point.

Everything from its moniker to its décor to the very food served - Saint Street Inn's slogan is "farm-to-table" - is a reflection of local character. After so many years sunken into Lafayette's culture, Tutwiler and Stubbs seem to have a found a way to physically manifest our small city's style. From the whimsically painted bathroom doors with dancing caricatures to the abstract, bohemian art on the walls to its wooden bar where 80 percent of the beers on tap hail from just off I-10, Saint Street Inn captures some sort of whipsmart magic indigenous to Acadiana. It doesn't pander to a tourist's idealism of "Cajun cun-tree" but shows what it really feels like to live in this city.

Sprigs of mint hang out freshly plucked and bathing in water on the bar. After years of getting to know farmers through her work at The Independent, Tutwiler is able to put those contacts to good use. The daily specials written on a chalkboard outside in true bistro style boast fresh food not always on the written menu, dictated by what the ground has to offer that season. The day of this writing a watermelon and cantaloupe drink, the aqua fresa, is offered alongside a meal of icy cold gazpacho soup garnished with a generous heap of lump crabmeat. Gazpacho is a Spanish soup made of diced tomatoes, cucumbers and spices, served in summer to utilize this season's typical harvest and nice and cold to combat the heat. A basket of sweet treats rests on the bar, changing daily and tempting you with a sugary impulse buy.

Everyone feels welcome here. Today there are two finely dressed women with white coiffures next to a table with a known tattoo artist next to a table of young mothers with babies in tow. The covered patio greeting you as you walk up is shadowed, spacious and billowing with fans tucked into its covered corners.

Lafayette was just voted the "Best Small Town for Food" by Rand McNally, so the competition is high and fierce. Saint Street Inn is here to raise the bar even more.