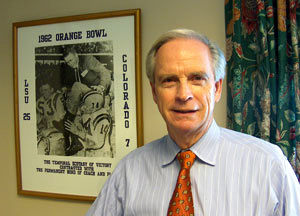 In addressing the Committee to Rebuild Lafayette North last week, Lafayette Utilities System Director Terry Huval announced that LUS is now operating two new 50-megawatt power generators, which could translate into lower electricity rates for Lafayette residents. He also said that LUS was nearing completion of "state of the art" renovation and expansion of its sewage plant located on Ambassador Caffery Parkway. "Of course, you've been seeing stories about these projects in the paper every day," Huval said with a laugh, knowing that no one in the room was eagerly awaiting an update on the utility's electric or sewage operations. The only thing on people's minds was the Public Service Commission's latest ruling on LUS' fiber-to-the-home project.

Since LUS announced its intentions to deliver phone, cable and Internet service to Lafayette residents nearly 16 months ago, the public utility has been engulfed in extensive legal battles with BellSouth and Cox Communications over the project. LUS has spent approximately $1.4 million on consultants, lawyers and marketing expenses related to the initiative, which was approved by a 24 percent margin in a public referendum July 16.

But Huval sees light at the end of the tunnel. LUS hits another milestone Sept. 1 when the Public Service Commission meets to adopt financing rules for the new venture. The PSC could be LUS' final hurdle before issuing bonds for the project. Opponents to the plan have until mid-October to contest the July 16 referendum, LUS' bond ordinance or the PSC ruling. Huval hopes that deadline will pass without further challenges to the LUS initiative, and the fiber build-out could begin in earnest in early 2006.

"This is a complicated process," Huval says. "There's a lot of work in the background that took place for this to happen."

The PSC staff has been working since last September on developing the accounting rules for LUS' new telecommunications division. The rules are based on state law and designed to create a level playing field for a public entity to compete with private telecom providers. LUS and the incumbent private providers, Cox Communications and BellSouth, have gone back and forth with the PSC and its staff to negotiate the rules. The staff's final recommendations, released last Wednesday, Aug. 24, appear to be a compromise that meets LUS approval.

"I think we have everything in the recommendation that LUS can live with," says Public Service Commissioner Jimmy Field, whose district covers Lafayette and Baton Rouge. "I'm not saying it's ideal," he adds. "But [LUS] understands that our responsibility was to set rules to make the competition fair given that this is the first time a government entity will be engaged in competition with private entities."

BellSouth and Cox Communications representatives did not return calls for comment on the PSC recommendations by press time. Cox has requested the chance to make oral arguments before the commission prior to the final ruling. (An amendment to the proposed rules requires the approval of three commissioners.)

Field has been a key ally for LUS and helped set up meetings between LUS representatives and public service commissioners.

"Jimmy has been on the commission for quite some time," Huval says. "And he knows the process better than we do. We know what it's like to deal with our [city-parish] council. Our biggest concern was not being as familiar with the PSC."

LUS also employed lobbyist Randy Haynie and several attorneys for the PSC negotiations, which recently turned in LUS' favor. The PSC staff's initial draft of rules in June followed an interpretation of the law advocated by BellSouth and would have prohibited LUS from using any utility revenues in paying off up to $125 million in bonds for the project. The staff's final recommendations for the rules ' released last Wednesday ' reversed that opinion and allow LUS' utilities division to cover the communications division should the bonds go into default. Without that change, it would have been very difficult to obtain a favorable interest rate on its loan.

"It was just a mistake for our recommendation to come out and say that you couldn't pledge the assets," says Field. The new rules also side with LUS' plea to allow money from its utility division to be loaned to its communications division at fair market rates. LUS has agreed with BellSouth and the commission's request to make an in-lieu of tax payment ' equal to what private providers pay ' during each year of operation.

Commissioner Dale Sittig, who represents several Acadiana parishes surrounding Lafayette, including St. Landry and Acadia, says he feels the final rules are fair to both sides.

"The rules are not set in favor of anybody or against anybody," he says. "The commission has no dog in this fight. We're doing exactly what the law says. Hopefully, everybody can get on board."

While only three votes are needed to approve the rules, Field says he is hoping for a unanimous decision. "I think to some degree they will give me some deference because it's in my area, and I know the situation very well, but in the end [the commissioners] will vote their own conscience."

Last week, Commissioner Foster Campbell reserved any comment on the staff's final rule recommendations because he had not yet had a chance to fully review them. Commissioners Jay Blossman and Lambert Bossiere did not return calls for comment.

Field says that LUS' plan has been selling itself.

"I've always felt like as a public service commission that we should be an instrument of economic development," he says. "We should help the state of Louisiana attract industry. We ought to open the door and allow them to try to do this and take the heat, so to speak, from the private entities, because we're losing a lot of industry in Louisiana. This might be a way we can attract high-tech jobs, and for that reason, because of the economic development angle, I believe the other commissioners realize that. We need to take that risk and go ahead and let LUS start this whenever they feel comfortable."