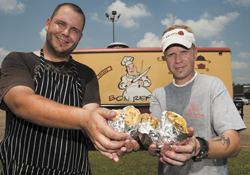 It doesn't take long to recognize that Chris Wadsworth loves what he does, and as the newest food truck operator in town, he's delivering that love straight to his customers. His mobile restaurant, the Bon Repas Wrap Truck, made its debut for lunch on Monday Aug. 15, stationed in the Party Time parking lot on Kaliste Saloom Road, and so far he says business is off to a great start.

This latest addition to Lafayette's slowly growing food truck scene will offer a variety of Louisiana-inspired wraps, and eventually "petite desserts" as well. Chris says he plans to run three to four regular wraps on the menu that will be offered at all times, such as the shrimp remoulade (featuring his very own Bon Repas season-all spice blend), chicken caesar, and smoked club, while the menu board will also feature one to two special wraps depending on the season. Last week, specials included the Turner Red, smoked Gulf redfish with baby spinach tossed in lemon-basil vinaigrette, bound together by a tomato-basil "skin" (as Chris likes to call them), and the Gator, alligator and pork sausages with shredded green cabbage and Creole tomatoes tossed in a honey-dijon vinaigrette, packaged in a jalapeno-cheddar skin. Other skin options include white, wheat, spinach and garlic-herb. At $4 for the club and $5 for all others, it's hard to feel like you aren't getting your money's worth.

Because Chris scored his ride for such a bargain, he is able to pass the savings along to his customers. In its previous life, the 1971 truck was used to deliver bread for the Holsum Cotton Bros.

company, and Chris discovered the retired vehicle in Prospect, La., about three months ago for only $800. While it didn't come furnished with any of the necessary equipment for a food truck, Chris felt it was important to purchase his vehicle from a Louisiana vendor and outfit it through Louisiana fabricators, "keeping all the money local." He did a lot of the work himself, but his sister-in-law Stacy Wadsworth is the local artist responsible for the truck's paint job, including the happy chef logo, which mirrors his Bon Repas spice jar's design. Ultimately, Chris is all about keeping it in the community, a philosophy that is reflected not only in the truck itself, but also on the menu. "All the proteins are local, produce is farm fresh, [and we] try to stay within 150 miles for all ingredients."

His commitment to Louisiana products must come from his professional history of working in Louisiana-owned restaurants. Starting in Lafayette almost 20 years ago, Chris is a self-taught chef who always knew he wanted to work in the restaurant industry. Now at only 33, Chris has already served as executive chef at, most recently, Nottoway Plantation in Plaquemines, as well as Oakbourne Country Club, Ruth's Chris Steakhouse, and Café Vermilionville. After uprooting his family of seven, including his wife Sommer and their then five children, Chris realized that his heart was not in Plaquemines. He knew he needed to get back to Lafayette, and then he met Michael LaFleur.

Michael, 24, was living in Baton Rouge and would eventually work on the Taco de Paco truck, one of Baton Rouge's first food trucks. They met while both were at Nottoway Plantation, where Michael was Chris's assistant before taking off to the taco truck. Frustrated with his position and new life in Plaquemines, Chris decided he needed to get back home. He called up Michael and asked, "If I were to start a food truck in Lafayette, would you come work it with me?" Michael quickly agreed, and just a few days later the guys were back in Lafayette.

For Chris, the decision to start a truck was simple. "Bricks are hard to move when I want to feed people on the other side of town. I also have been in this business for 19 years, where limitations were [set] by the four walls. Now my innovation and drive to peak others' passion for food is all that holds us back." He sees his truck as a way to not only provide for his still growing family (baby number six is on the way), but also a means to strengthen his community by supporting local businesses. Bill Whitaker, owner of Party Time, recognized the opportunity to increase traffic through his store's shopping center and happily obliged when Chris proposed using his lot as the truck's inaugural location. The Bon Repas owner envisions a Lafayette food truck scene where copious trucks roll together, hosting events at various Acadiana businesses like Baton Rouge's Wround-Up, and "work together to take [our] culinary-driven community to the next level."

Don't forget about the other Lafayette food trucks popping up all over town, and look for Freetown Fries to soon make its debut.