The Ragin' Cajuns open their 2011 football season at Oklahoma State, a foe that came to Cajun Field 25 years ago for one of the most memorable, gut-wrenching games in Cajun history. Looking forward, we look back.
By John Mikell

The Ragin' Cajuns open their 2011 football season at Oklahoma State, a foe that came to Cajun Field 25 years ago for one of the most memorable, gut-wrenching games in Cajun history. Looking forward, we look back.
By John Mikell 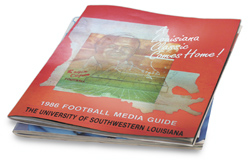 The 1986 USL football guide welcomed new head coach Nelson Stokley back to Louisiana. A former standout quarterback at Crowley High and LSU, Stokley returned to the Pelican State from South Carolina, where he had been offensive coordinator and helped coach Clemson University to the 1981 NCAA national championship.

When Mark Hudspeth leads his UL Lafayette Ragin' Cajuns football team onto the field at Boone Pickens Stadium in Stillwater, Okla., he will be the third of the last four Cajun coaches to debut against the Oklahoma State Cowboys. In 1999 Jerry Baldwin coached his first squad to a 24-7 loss in Stillwater, an accurate preview of his three years that mark the low point of Cajun football. But 25 years ago when Nelson Stokley's first team faced OSU at Cajun Field, the times and the teams were very different.

The 1986 OSU Cowboys were far better than the OSU team Baldwin faced. In fact, it could be argued Stokley's first game was against the most talented team to ever set foot on Cajun Field. Pat Jones was head coach going into his third year with an 18-6 record. The Cowboys had played in the last two Gator Bowls. Thurman Thomas, junior running back, was a Heisman candidate and would leave OSU as the all-time rusher. A two-time All-American, he would be elected to the College and NFL halls of fame. A freshman named Barry Sanders backed up Thomas. Sanders would bide his time until 1988 when he would have the best year in college football history and win the Heisman. He joined Thomas in both halls of fame.   Returning All Big 8 receiver Bobby Riley lined up alongside probably the most talented player of all, Hart Lee Dykes, a 6-foot-4-inch 220-pound receiver from Bay City, Texas. Dykes had been the top recruit in the country and 1986 would be his breakout year. Standing on the Cowboy sideline, not yet a man, was freshman quarterback Mike Gundy, later the all-time OSU passing leader and currently the Cowboys head coach.

Stokley's primary weapons in his first game were a new "Run and Shoot" offense quarterbacked by redshirt freshman Richard Pannell and an unproven defense led by linebacker Joe DeForest. Taking it all in was freshman quarterback Brian Mitchell.

Oblivious to the obvious mismatch, 23,000 people showed up to greet the new coach, the new season and the biggest-name school to ever play at Cajun Field, unaware they were about to see possibly the greatest game ever played there.

From the opening play Stokley's offense was effective. For the game the Cajuns gained more than 450 yards in total offense, dominating time of possession and leading in first downs 22-17. Meanwhile, the Cajun defense prevented any sustained drives and held Thomas to 85 yards. Only an early missed field goal and an unsuccessful run on fourth down from the OSU one-yard line kept the Cajuns scoreless. But on the next Cajun possession a field goal put the Cajuns up 3-0. Then midway through the second quarter Quentin Thomas returned an interception 22 yards for a touchdown and a 10-0 lead. The score held, and at halftime most Cajun fans were as stunned as the Cowboys.

An exchange of field goals in the third quarter maintained the margin at 13-3 and set the stage for a most memorable fourth quarter. The quarter started with amazing back-to-back plays by the Cowboys. From the Cajun 45 Dykes, on an end around, suddenly stopped and from the OSU side of the 50 spiraled a perfect pass to Riley in the end zone. The All Big 8 receiver dropped the ball. Before Cajun fans could regain their composure, quarterback Ronnie Williams dropped back and found Dykes, who had returned to Riley's spot in the end zone, for a 45-yard TD. With plenty of time remaining in the game it was 13-9 and the Cowboys freakish athleticism seemed to unnerve the crowd.

The Cajuns, however, remained unfazed. On their first series after the kickoff, Glenn Floyd, who rushed for 150 yards, broke loose for 65 yards down to the OSU two, where he fumbled. But the score the Cajuns desperately needed to turn away OSU's momentum was only delayed. On third down of the ensuing OSU series, quarterback Williams dropped back to pass, was hit, and Benny Carey recovered his fumble in the end zone. With 3:29 left the Cajuns led 20-9.

Then, in the midst of pandemonium, Stokley, whose game plan had worked to perfection, who had his team ready to play well enough to win, faltered. "We should have squibbed that kick," he said later. Instead the Cajuns kicked deep, and Riley returned it 97 yards for a score. After OSU missed its second 2-point conversion attempt the Cajuns led by five. 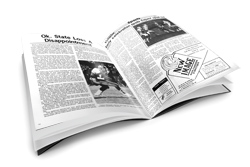 Too quickly the Cajuns received the kick and failed to move. After a good punt return by Riley, OSU put together its first and only sustained drive against a tiring USL defense. A succession of completions by the suddenly accurate Williams and a fourth down conversion led the Cowboys to the Cajun 11, capped by an alley-oop TD pass to Dykes. OSU had its first lead at 21-20 with eight seconds left. The Cowboys squibbed the kick and the game was over.

Speaking to The Daily Advertiser's Bruce Brown after the game, Stokley, once offensive coordinator of 1981 national champion Clemson, said, "I've been fortunate enough to be associated with some good football teams, but never one that has played harder, or gave more of themselves than we did tonight."

Apparently their Cajun Field experience shook up the Cowboys. OSU dropped its next two games and turned to Mike Gundy at quarterback. They finished 6-5. 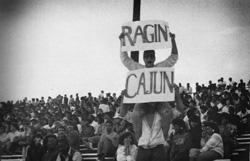 Not surprisingly the Cajuns seemed inspired by their effort against OSU. They ran off a four-game winning streak that ended with a 21-20 loss to Ole Miss. The Cajuns finished Stokley's first year at 6-5 and with freshman Brian Mitchell at quarterback. Three consecutive winning seasons followed. But eventually the struggles to remain competitive and find a suitable conference took their toll. When Oklahoma State next visited Cajun Field in 1997, USL was an independent in the midst of a four-game opening stretch that also included Pitt, Texas Tech and Texas A&M. The Cajuns lost 31-7 and a year later Stokley was gone.

The end was bitter, but for Cajun fans who remember Stokley's first game the beginning was brilliant.

Retired state employee John Mikell is a longtime football observer with a weakness for sports data. He tells us the 1986 USL-Oklahoma State game was the third best he ever witnessed, behind 1979 LSU-USC and 1959 LSU-Ole Miss.