Wortman Pottery is at once fine, fanciful and functional, drawing inspiration from earth and sea. By Anna Purdy

The path to Emily and David Wortman's home is named Potters Road. It's not a coincidence.

Open seven days a week, the Wortman Pottery showroom is a promenade of pottery, all beautiful and all original, handcrafted and worked over the wheel by David, with Emily carefully structuring the details.

Wortman Pottery is at once fine, fanciful and functional, drawing inspiration from earth and sea. By Anna Purdy

The path to Emily and David Wortman's home is named Potters Road. It's not a coincidence. 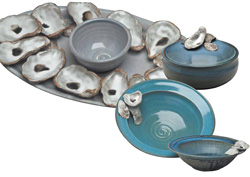 Open seven days a week, the Wortman Pottery showroom is a promenade of pottery, all beautiful and all original, handcrafted and worked over the wheel by David, with Emily carefully structuring the details. There are decorative plaques with pithy phrases and ornamental pottery as well as the more utilitarian pieces for serving, for baking, and in some cases for prayer and worship. In fact, the majority of the Wortmans' work is designed for daily life, not to be put on a high shelf and admired. It's made to be handled and felt, shown and shown off, honoring the work the Wortmans put in by using it for your own - platters for serving main courses, bread bowls with a fleur-de-lis at the bottom to bake that so-French indenture into the bread, French drip coffee makers and table settings, old-fashioned butter bells - or beurriers - along with beautiful mugs. There are platters that mimic Louisiana fish right down to the scales. There are mugs with clay replicas of crawfish molded for handles. Wortman Pottery also specializes in a field of pottery known as "liturgical ware," cruet sets and lavabo bowls for religious ceremonies from all denominations. "We saw a need for this," says David, "and now we get orders from all around the world."

You could fill your kitchen and pantry with the Wortmans' work, both useful and beautiful.

David met Emily while they were attending art school at Tulane University in New Orleans. Emily had a genuinely Crescent City childhood, with a grandmother who took her grandchildren to high tea. Emily's mother was baffled when her daughter moved to (what was especially at that time) the back of beyond in Cajun Country.

"When she married me, she didn't know what she was in for," says David. Now they live rustically between Duson and Rayne in Acadia Parish, signs off Highway 90 helpfully pointing the way to their workshop and home. The showroom is a few feet away from the workspace and the house where they raised three children. Fat gray cats linger around, adding a mystical, artistic element to the land.

A few years ago, David and Emily were mulling over the beauty of oyster shells, the fine ridges and waves of which can hide both a meal and a pearl if a person is lucky, when they had an idea: Why not craft a pottery version of the shell, replicate it in clay and use it to decorate pottery? With David at the potter's wheel throwing clay and Emily carving the oyster shells by hand, the result was the "oyster line."

The pieces in this line look like real oysters were cleaned and affixed to the plate, but rest assured, it is clay. Emily works from a cast and carves each piece; the glaze is hand-painted in order to mimic the dusty brownish-gray of the real thing. The plates themselves are a dazzling cerulean blue, like a stormy sky reflected in the ocean. These pieces can go in the oven and in the dishwasher - just as durable as any Le Creuset pieces you would buy for twice as much at a kitchen store.

FROM LAFAYETTE: Take Cameron Street/U.S. 90 west through Scott. One mile west of Duson look for Riceland Road and the sign that says "Wortman Pottery." Take a left and head south a half mile to Potters Road and turn right. Another half mile and you're there.
You can also peruse the Wortman Pottery website at wortmanpottery.com, or give them a call at (337) 873-8584.

In order to understand the craft of pottery it is vital to know the process.

First, clay is mixed on site, usually a composite of several different earthen ingredients chosen based on the potter's intentions. Once mixed, the clay is literally thrown - an abusive process that works out the air pockets, making the clay uniform.

Working on the wheel is nothing like Demi Moore and Patrick Swayze getting fresh in the movie Ghost; the clay is thick and sticky, drying quickly and sticking to your skin like tiny brown bits of a succubus. Water is close at hand to keep the clay wet enough to work with but not so wet that it breaks - it is mud, after all, and easily punctured. What happens between the hands and the wheel is a combination of years of practice and an active imagination for the finished product.

From here, the pottery is cut from the wheel carefully with a wire held tight between two hands and slid under the piece. It's then set aside to air dry.

Once dry, it heads to the kiln, which runs at easily twice the temperature of your home oven, followed by a dip in glaze, a viscous liquid made of silica that gives the piece a glassy surface, making it harder and waterproof. Glaze can also be painted and dripped onto the piece.

Repeat both steps several times depending on detail. From start to finish, one plate, one mug, one piece of pottery can take 40 hours, easily.