THE SON IS UP
Lafayette's rising Creole prodigy Cedric Watson and his laudable Creole, Cajun and zydeco ensemble Bijou Creole are ready for the reinstatement of the Cajun/Zydeco category at next year's Grammys with the release of Cedric's first self-produced album, Le Soleil Est Levé. 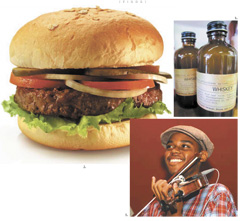 THE SON IS UP
Lafayette's rising Creole prodigy Cedric Watson and his laudable Creole, Cajun and zydeco ensemble Bijou Creole are ready for the reinstatement of the Cajun/Zydeco category at next year's Grammys with the release of Cedric's first self-produced album, Le Soleil Est Levé. Cedric's latest album contains an incredible mix of the melodies found in the Louisiana heartland and serves as an undeniable example of what it has to offer the Afro-Caribbean genre. Le Soleil Est Levé is now available on Cedric's website cedricwatson.com for $15. But if you would rather hear it live, check out Cedric Watson et Bijou Creole at their CD Release party this Saturday at 10 p.m. at the Blue Moon Saloon. - Wynce Nolley

BIG BURGER, SMALL TOWN
Don't let the construction around downtown Youngsville's effort to save the live oak thwart your travels to Roundabout Tavern on Iberia Street. On Sundays it might just be Acadiana's newest and best secret. There is a breakfast brunch with amazing waffles and all the usual breakfast fare, including mimosas. If you are in the mood for something more substantial to quell either your hunger or your hangover, try one of the burgers. The standard burger is made with Angus beef and topped with the usual condiments and a thick, ripe tomato and lettuce. The Cali Burger is served with pepperjack, Thousand Island dressing and avocado. It's served with hand-cut steak fries thick enough to initiate a mock sword fight, or you can get an order or lightly battered fried pickles instead. Live zydeco on the stage to boot. Only $8 for burger and fries. - Anna Purdy

MAKING A SPLASH
Aftershave often garners countless naysayers with all those suffocatingly, headache-inducing versions out there. Men often tuck away this product of their grandfathers in exchange for generic, mass-produced scents or au natural odors. However, Genterie Supply Co. in downtown Lafayette is resurrecting the glory days of aftershave with Whiskey Aftershave Splash. Just don't correlate it with a dark liquor in which it shares a name. It stands worlds apart from emitting a fermented grain mash odor. Instead, Whiskey Aftershave Splash is an ode to masculinity, with intermingling woodsy and amber fragrances. With subtle notes of flowers and spices revealing themselves over time, this aftershave is the modern mystery man's go-to fragrance. Let those pheromones channel the original mavens of mystery - Marlon Brando and James Dean - when you dash on this $15 aftershave.
- Emily Henagan