"After meeting privately today with Go. Jindal and discussing the matter with him, I have decided to become a member of the Republican Party." 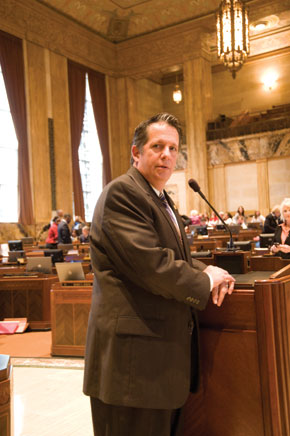 Robideaux, who calls himself "a lifelong independent," announced late Wednesday that he is joining the Republican Party.

"After meeting privately today with Gov. Jindal and discussing the matter with him, I have decided to become a member of the Republican Party," Robideaux said in announcing his decision.

Robideaux, the current speaker pro tempore, isn't commenting on whether this amounts to a quid pro quo with the GOP governor, whose support he needs in his bid to become speaker. "I'm not discussing the particulars of the meeting, but I will say that I feel I'm in a better position than before," Robideaux tells The Independent this morning. He becomes the 57th Republican in the 105-member House of Representatives.

Robideaux noted in his announcement that his voting record has always been conservative.

"During my political career, I have prided myself on being able to work with everyone, no matter their party affiliation, and to forge coalitions and consensus to pass legislation beneficial to our state and our citizens," he said. "This will not change. I simply believe I can do the most good by aligning myself with the party."

After meeting with Robideaux, Jindal issued the following statement: "We met with Joel today and we're happy to welcome him to the Republican Party. Joel has always been a friend and we look forward to continuing to work with him on conservative reforms that will grow Louisiana's economy and make state government more efficient and more effective for Louisianians."

Elected to the House in a special election in 2004, Robideaux served on the House Civil Law and Procedure, Natural Resources and Retirement committees during his first term. In 2008, he was appointed chairman of the House Retirement Committee and serves on the powerful Ways and Means Committee, Joint Legislative Committee on Capital Outlay and Legislative Budgetary Control Council. He was elected Speaker Pro Tempore in 2010.

Robideaux represents House District 45, which encompasses part of Lafayette Parish. So far, he has no opposition in his re-election bid this fall.

Also vying to replace House Speaker Jim Tucker, R-Terrytown, in the next term are Democratic Reps. Jim Fannin of Jonesboro and Jeff Arnold of New Orleans, along with Republican Reps. Chuck Kleckley of Lake Charles, Erich Ponti of Baton Rouge and Hunter Greene of Baton Rouge.

Read more about Robideaux's campaign to become the first speaker to hail from Acadiana in five decades in this April 13 cover story, "Independent's Day?"