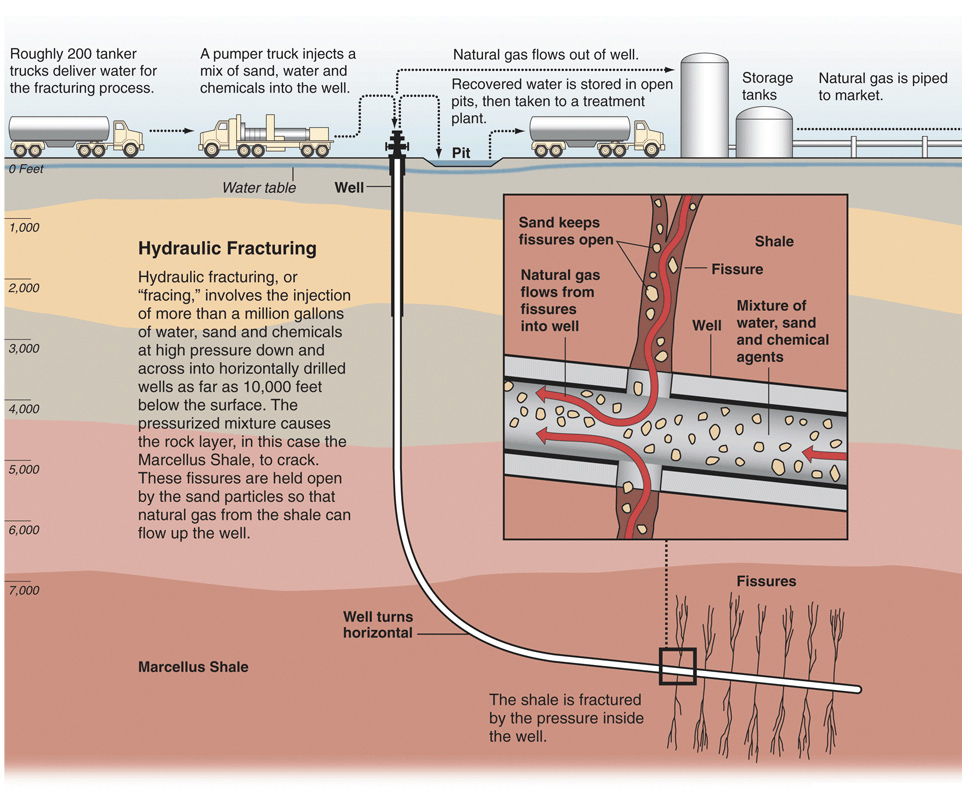 In sharp contrast with gas industry portrayals, the draft report released in mid-August by a federal panel on shale gas drilling explicitly acknowledges that current regulations may be insufficient to protect the environment and public health.

For years, the gas industry has said that drilling with hydraulic fracturing, or fracking, into deep shale formations is safe. The federal government has been caught in an awkward position, limited from regulating the industry by exemptions written into federal environmental laws, while also working to promote domestic energy production.

The draft report continues to promote drilling, but it comes down squarely on the side of stronger oversight. It notes serious environmental impacts from shale gas drilling and says it is "far from clear" whether federal and state regulations are protecting the public.

"If effective environmental action is not taken today," the report says, "the potential environmental consequences will grow to a point that the country will be faced [with] a more serious problem."

Many of the panel's recommendations already have been adopted by some states and members of the drilling industry over the last couple of years, including disclosure of chemicals used in fracking and better well construction.

Some go further. The report recommends that companies monitor air quality on drilling sites and publish those results. It also calls for limits on emissions of methane, a potent greenhouse gas and the primary component of natural gas.

"I think we're lifting the bar a bit," said John Deutch, chairman of the panel. Deutch is a former CIA director, has worked for the Energy Department and also sits on the board of two energy companies.

Across the board, the panel recommended making more information available to the public in order to create transparency and give a sense that progress is being made, Deutch said.

President Obama commissioned the report in March from Energy Secretary Steven Chu, who later appointed the seven-member panel. The panel was given 90 days - ending Aug. 11 - to come up with immediate steps that can be taken by regulators and drillers.

The report released the following day doesn't recommend any specific regulations, leaving that to state and federal agencies. Many recommendations rely on industry cooperation.

"Whether and how these recommendations will be implemented is absolutely the critical question," said Matt Watson, senior energy policy manager at the Environmental Defense Fund. That organization's president, Fred Krupp, was the panel's only member from an environmental group.

The report is notable in part because of the makeup of the panel. Some environmentalists, academics and state lawmakers have criticized the group, saying that six of the seven members have financial ties to oil and gas companies. Watson, who was not among that group of environmentalists, said the members' biographies could make the recommendations carry more weight.

"Some of them are quite bold," he said of the findings, "and it's noteworthy that a group like this panel, which is made up of members with very diverse backgrounds, would come to consensus."

Some aspects of the report are in clear conflict with industry characterizations. For example, the report says that the oft-repeated industry line - that fracking has been performed safely for decades - is insufficient to quell concerns. Instead, it says, the industry must monitor its own activities and make those results public.
The Independent Petroleum Association of America, an industry group, issued a statement calling the report a "useful starting point" for achieving improved safety. The group did not respond to a request for comment.

On the central question in the debate over fracking - whether millions of gallons of fluids injected deep in the earth can migrate through cracks and contaminate aquifers - the panel took a nuanced view. The report says there is a slight chance of that happening, but it does not rule out the possibility, saying "few if any" cases have been confirmed. Deutch said they chose the wording out of caution, not because they are aware of any cases.

"This all depends upon how prudent a person you are," he said. "If you say no cases,' one is going to turn up."

Anatomy of a Gas Well
Graphic by Al Granberg/ProPublica

Some advocates said the panel's recommendations fell short of what is needed to protect the public. Dusty Horwitt, senior counsel for the Environmental Working Group, said he was disappointed that the report made no mention of the many exemptions for oil and gas companies from major environmental laws like the Safe Drinking Water Act and the Clean Air Act. While he supports many of the recommendations, he said it is unclear how they will translate into better practices.

The report comes amid a robust public relations effort from the industry arguing that drilling and fracking are safe. As concerns have grown, companies have been running full-page spreads in newspapers and putting ads on TV.

ProPublica has been reporting on the safety and environmental risks of gas drilling for three years. Previous investigations have detailed many of the problems addressed in these recommendations, including doubts over the climate benefits of natural gas, gaps in the disclosure of fracking chemicals and problems with wastewater disposal.

Although many of the panel's recommendations have already been adopted or considered by state governments and the EPA, the report is significant in its acknowledgement of the threats, said Amy Mall, a senior policy analyst with the Natural Resources Defense Council.

"What's important here are the underlying findings: that there are problems that need to be fixed, and that they can be fixed."

Two of the most significant recommendations involve water use and air quality. The EPA proposed rules in July that would reduce emissions of smog-forming and toxic air pollutants from many stages of the drilling process. The report calls for a broader approach that would encompass more operations and that would also limit methane emissions.

The panelists also called for a systemic approach to water use that would track every step from withdrawal to disposal. Most states do not track exactly how much of the fluids pumped underground in fracking returns to the surface as waste - as much as 90 percent can remain.

Other recommendations call for the creation of a public database linking to disparate sources of information on fracking and shale gas drilling, and for more research and development from the government (the Energy Department recently announced $10.3 million in grants for shale gas research). Deutch said the proposals call for about $75 million in new federal spending on these initiatives.

The draft will be reviewed by an Energy Department committee next week before being finalized. Over the next 90 days, the panelists will use the recommendations to come up with specific advice for the Department of Interior, which regulates drilling on federal land, and the EPA. It will be up to those agencies to pursue any rulemaking they decide is necessary.

This story is part of an ongoing investigation into fracking by ProPublica, an independent non-profit newsroom that produces investigative journalism in the public interest and in 2010 became the first online news source to win a Pulitzer Prize. Advances in horizontal drilling have made fracking a common process, especially in north Louisiana's natural gas rich Haynesville Share area. For more on the investigation into this method for extracting natural gas, visit propublica.org.