State Reps. Page Cortez and Rickey Hardy, Assessor Conrad Comeaux, House District 44 contender Vince Pierre - each popped into the Lafayette Clerk of Court's office Tuesday morning to file their papers and pay their fee to run in the upcoming election on Oct. 22. 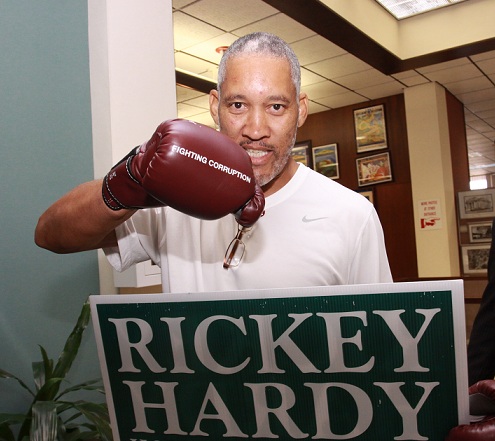 State Reps. Page Cortez and Rickey Hardy, Assessor Conrad Comeaux, House District 44 contender Vince Pierre - each popped into the Lafayette Clerk of Court's office Tuesday morning to file their papers and pay their fee to run in the upcoming election on Oct. 22.

Qualifying ends at the close of business Thursday; we'll know for sure by then what the ballot will look like. And although it's mere speculation at this early juncture, it appears there will be at least five, maybe six, of the nine City-Parish Council seats in play. Craig Spikes has announced his intention to seek the District 8 seat for which District 8 Councilman Keith Patin is seeking re-election, while two other would-be councilmen - Walter Campbell and Britt Latiolais - are reportedly (and we've reported it) going up against William Theriot in District 9 and Jared Bellard in District 5, respectively. Additionally, among the conservative candidates benefitting from a Thursday fundraiser in Broussard is Andy Naquin, who will challenge District 6 incumbent Sam Doré. (Spikes, Theriot and Bellard are also beneficiaries of that Thursday fundraiser.) The Daily Advertiser reported last month that another TEA-leaning candidate, Joan Beduze, announced her intention to take on District 7's Don Bertrand. And in District 1, Cajun musician Kevin Naquin is running for the seat currently held by Councilwoman Mary Morrison, who is fulfilling the remainder of the term of her husband, Scott Mayor Purvis Morrison, and who cannot seek election to the seat. It's unclear at this point whether Naquin will have a challenger in District 1.

The race to watch for the CPC will be in District 3 where incumbent Councilman Brandon Shelvin is seeking a second four-year term. His financial and legal problems widely chronicled in this newspaper and other media outlets over the last couple of years, Shelvin will have a challenger. One politically connected District 3 resident who asked not to be identified, told The Ind last week that he will wait until Thursday and if no other qualified candidate has registered to challenge Shelvin, he'll step up and qualify.

It's in the state House and Senate that there appears to be little in the way of election-season excitement for the Lafayette area. Rep. Cortez, currently the state representative for District 43, hopes to take over the District 23 Senate seat being vacated by term-limited Sen. Mike Michot; Cortez has no known challenger at this point for the seat. UL VP Jerry Luke LeBlanc, a former state rep and commissioner of administration under Gov. Kathleen Blanco, expressed an interest early on in seeking Michot's seat but later withdrew. Meanwhile, businessman Stuart Bishop is the only candidate who has indicated he will seek Cortez's seat in the House. Rep. Joel Robideaux, the current House speaker pro tem who last week registered as a Republican and will seek the House speaker post next spring - previously Robideaux had no party affiliation - has no known challenger in his re-election bid in District 45. So far, only incumbent Rep. Rickey Hardy in District 44 and state Sen. Elbert Guillory in District 24 have announced challengers: the aforementioned Vince Pierre versus Hardy and Opelousas Mayor and former state Sen. Don Cravins against Guillory. The latter of those two races promises to get chippy.

House District 96 - a new black-majority district created in the spring redistricting session - has several announced candidates including former St. Martinville Mayor Eric Martin and retired Louisiana State Police Commissioner Terry Landry. And in the Carencro area, the House District 39 seat held by Rep. Bobby Badon, who announced last month he will not seek re-election, is also up for grabs.