The snapshot of Rep. Jeff Landry circulating in national media outlets reminds us that sometimes a picture is worth a thousand jokes - on you Mr. Landry. 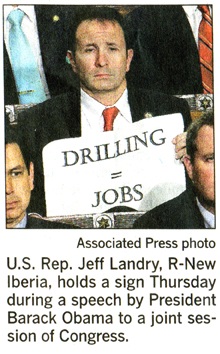 It's rare when a screen name like "kindmaryjane" offers the most insightful analysis of DC politics, but this anonymous Times-Picayune online reader had it right when responding to U.S. Rep. Jeff Landry's sign-carrying stunt during President Obama's job speech Thursday night: "Keep it classy, New Iberia."

Landry, the TEA Party-backed Republican who represents Louisiana's 3rd Congressional District, sat quietly among his colleagues as the president outlined his new $450 billion jobs package, then at one point during the speech held up a sheet of paper that read "DRILLING = JOBS."

National media outlets have speculated that Landry's childish act was only a minor infraction in terms of congressional decorum, but with Landry sitting just two rows behind the now infamous Rep. Joe Wilson ("You Lie!"), one analyst tells The Times-Picayune that GOP leaders who advised Republicans to respond in civility "couldn't have been pleased."

Landry tells The T-P Friday that "the poster was simple and concise but it is a much better and more thorough plan to create jobs than Obama's speech:"

Landry spokesman Millard Mulé said the congressman did not let the GOP leadership know in advance of his plans.

An official with the House Parliamentarian's office said that no one at the podium noticed the sign. Had it been displayed during normal House debate, a member could have raised an objection that the sign wasn't consistent with the decorum expected of members and put the question of whether the sign was appropriate to a vote.

Perhaps Landry's three-word "thorough" plan to stimulate job growth could have been better relayed to the president on June 1 when Obama invited congressional Republicans to the White House. Oh, wait. Landry was the only House Republican to decline Obama's invitation.