Pineville native Faith Ford was in town this past week to promote the new thriller movie Escapee, written and directed by Campion Murphy. Ford is most well known for her two television shows, Hope & Faith and Murphy Brown. 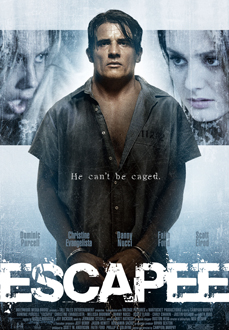 Pineville native Faith Ford was in town this past week to promote the new thriller movie Escapee, written and directed by Campion Murphy. Ford is best known for her two television shows, Hope & Faith and Murphy Brown.

Escapee was made entirely in Louisiana. From its investors to its production work to its distribution, virtually all was filmed using Louisiana-based labor.

Dominic Purcell (of television's Prison Break) plays Jaxson, a resident of an insane asylum who spies a young college student named Abby who is at the institution because of a school assignment. Jaxson's fixation on Abby inspires him to break out and go get the object of his obsession by whatever means necessary, which Abby quickly discovers as her friends start to disappear.

Filmed around Alexandria and set over the course of one night, this is a thriller that pays tribute to movies like Jaws and the Hitchcockian notion of suspense.Ford stars as a detective trying to track Jaxson down. Kadeem Hardison and Justin Gaston are also featured, and lots of locals were employed as extras in the movie.

"We came in first in Alexandria the first weekend it opened," says Escapee producer Scott W. Anderson in a phone interview this morning. "It's done well enough for the theater chain to want to hold it over." Anderson added that Alexandria and Lafayette are being used as test markets, which means that attendance may help the film go national.

Ford may return to Lafayette for one more Q&A.

Check the Grand 16 for local showtimes. Look for more on our dinner with Faith Ford, Campion Murphy and Scott. W. Anderson in this week's issue of The Independent.