With menswear-inspired footwear returning for its sophomore season, women are again embracing this trend. By Emily Henagan

Fall has finally arrived, and it's time to tuck away those sandals and flip-flops for footwear that will flawlessly transition your wardrobe into autumn with menswear-inspired suede, nude, chunky and color-blocking pieces.

With menswear-inspired footwear returning for its sophomore season, women are again embracing this trend. By Emily Henagan 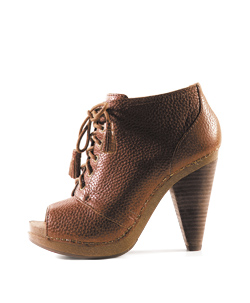 Fall has finally arrived, and it's time to tuck away those sandals and flip-flops for footwear that will flawlessly transition your wardrobe into autumn with menswear-inspired suede, nude, chunky and color-blocking pieces. This season's shoes are for the women who alter their looks as much as mega celebrities alter their careers.

"Shoes can transform an outfit," says Katelyn Miller, a manager and buyer at Shoe-La-La and Knotting Hill - both located in River Ranch. "If you're wearing a boring outfit, statement shoes can make the outfit completely interesting."

"You can alter the same outfit just by changing your shoes," echoes Hemline manager Stephanie Theriot, who says she is enamored with the chunky trend. These shoe staples cause a long shirt and tight ensemble to undergo a cozy, effortlessly cool metamorphosis. Step out in Tracy Reese's "Jacoby" at Hemline for $175.

Miller reveals her favorite type of fall shoes are the tough, biker-esque boots. This fall, she predicts, shoppers will encounter this Rihanna-reminiscent footwear, which brilliantly complements skinny cargo pants and skinny colored denim. Cover those feet and gams in Apepazza's blush version at Shoe-La-La for $220.

Miller adds that shoes bathed in suede and blocked with colors will be everywhere this season.

Allie Crawford, Imelda's Fine Shoes manager, agrees that suede is an on-trend textile this autumn. Crawford, who has more than eight years retail experience, says fringed-out, moccasin-inspired flats and boots are her favorite in-the-fashion-know look this season. The Minnetonka moccasins at Imelda's for $87.50 channel the U.S.'s original inhabitants.

Crawford also stresses that a woman will never fall victim to fashion with timeless trends like leopard print heels and funky cowboy boots. "Cowboy boots never go out of style in the Lafayette area," she says. "They're classic, and they're very dynamic."

Perhaps the most dynamic trend, which is also the most difficult to execute, lies in the menswear-inspired flats and heels. "Brogue" sounds like coarse British lingo, but this term actually refers to those laced flats made of heavy leather and boasting a perforated toecap detail. If you prefer a more subtle look, shelter your feet in a purveyor of oxfords, like the gray ones from Very Volatile at Shoe-La-La for $70.

Whether for the office or after-hours rendezvouses, you can find your inspiration for every occasion in this season's footwear. Forrest Gump always volunteered his mother's advice, "Momma always said you could tell an awful lot about a person by the kind of shoes they wear."

And this season's shoes will tell tales of intrigue, quirkiness and sophistication.