A dispute between KLFY and Cox Communications could mean a mad rush for digital antennas to watch Super Bowl XLI in high definition. 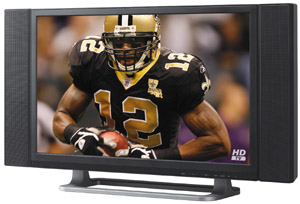 We've heard the hype for years and weren't quite sure what to make of it, but take it from sports fans: once you see an NFL football game in high definition, you never go back. Regrettably, at this time our local CBS affiliate isn't on Cox's HD lineup, so the Feb. 4 Super Bowl won't come into your home in HD. But before you go gettin' all upset that you won't be watching the Super Bowl ' and hopefully our Cinderella Saints ' in this spectacular quality, stay tuned.

If you invested a thousand or so bucks in an HD TV set (one with a built-in digital tuner), don't fret. All you have to do is prop a digital antenna (available locally for $75 to $150 at stores like Ricky Smith's Audio) on top of your set or in your attic (for better reception), use the auto program feature to tell the TV set to search for the over-the-air digital channels and voila, you're watching the game in HD on Channel 56.

It's as easy as going from watching a DVD back to cable.

So why can't you just switch the cable remote to Cox's 700 channels and get CBS in HD like you do for ABC, NBC, FOX and other networks? Because Cox and local CBS affiliate KLFY have yet to strike a deal to bring it to you.

"Cox is playing hardball," says KLFY General Manager Mike Barras. "Their attitude is, 'I'm the big boy, and you either take what I offer or don't take anything.'"

No thanks, Barras told Cox more than a year ago. He says the negotiation impasse has nothing to do with KLFY seeking monetary compensation for Cox to carry its signal in the HD lineup ' an issue so heated in the mid-1990s that KLFY almost went black on the cable system ' but rather his right to control programming. He explains that once digital is fully integrated ' the Federal Communications Commission's ever-changing deadline is now February 2009 ' KLFY will be able to "multicast," or broadcast a number of signals on its Channel 56 spectrum. In essence, KLFY could offer different programs on channels 56-1, 56-2, 56-3, 56-4. Unlike analog, digital channels can be compressed to allow multiple channels ' primarily an HD core channel and subsets of digital channels ' on the same spectrum.

Barras says KLFY might want to run weather 24 hours a day on one channel, or high school football games or news re-runs; he wants the right to dictate his programming. "We're not asking Cox for money," he says. "They want the option to reject [the programming KLFY chooses]. They can't do that, they can't tell us what to program or not to program. We won't let them do that because we want to be able to control what we put out. That's the only sticking point."

Andrew Shenkan's tact a year ago was quite different from Barras'. The general manager of ABC affiliate KATC, Shenkan says nothing would have stopped him from getting on the HD lineup in time for the 2006 Super Bowl game between the Pittsburgh Steelers and Seattle Seahawks, which ABC broadcast. "We [Cox and KATC] came to terms on that deal in January 2006 because we wanted people to get used to viewing us in HD and because the Super Bowl is the perfect launch. It has such a huge audience. I was adamant about it, and of course Cox wanted it, too."

Though he would not disclose terms of the negotiations, the KATC official says he was happy with the outcome. "We are exchanging value. We're being compensated," he says. "We got multicast as part of our agreement," Shenkan continues. "I would not have entered into the agreement if I had not gotten it. When we're ready to program a sub-channel on our digital tier, we will approach Cox to clear that channel." Shenkan predicts he'll launch a sub-channel, which the FCC says must offer three hours per week of children's programming, in the next 12 to 18 months.

Despite the impending deadline of the big game, Cox spokeswoman Sharon Kleinpeter is hopeful the Super Bowl will be televised locally on the Cox system in HD. "We certainly would like to have a resolution to the negotiations by that time," she says. "We have a few weeks, and it's been going on for a while, so it's not like we're starting from scratch."

Barras says he'd be willing to discuss a temporary solution that would put KLFY on Cox's HD lineup in time for the Super Bowl, "if the temporary deal includes allowing me to program what I want."

And while negotiations between Cox and KLFY haven't progressed much on the HD side, the situation could worsen when analog is phased out in the next couple of years. If the two parties don't come to an agreement that gives KLFY total control of its programming, Barras says he'll likely be off the cable system altogether.

Such negotiation standoffs certainly aren't exclusive to Lafayette and have been going on for many years. "This is a big topic," says Shenkan. "Broadcasters and cable companies are at odds [across the country]."

Lafayette cable subscribers, take heart ' the situation could be much worse. On Jan. 4 The Times-Picayune reported that WWL-TV's analog signal may go dark on the Cox cable system a few days before the Super Bowl due to a negotiation impasse between Cox and WWL's parent company over Cox adding CBS affiliate WWL to its HD lineup in New Orleans. That'd mean a total Super Bowl cable blackout in the Crescent City.

Cox notified its customers of the potential change, and WWL fired back with a missive on its Web site and included the phone number to Cox's office to incite viewer protest. "This pathetic practice ' enlisting viewers and subscribers as soldiers in corporate-level maneuvers, when we are, in fact, actually hostages ' is apparently an irreversible trend," wrote Times-Picayune reporter Dave Walker.

Already this year, at least one stalemate led to a mad rush for rabbit ears when Sinclair Broadcast Group pulled 22 of its stations off Mediacom Communications Corp.'s cable systems in 13 states. The two groups failed to negotiate a retransmission agreement for the cable company to carry Sinclair's programming, with Sinclair claiming the cable company would not meet its asking price. Mediacom responded by providing antennas to thousands of subscribers, maintaining that it shouldn't pay for what's free over the air ' an argument Cox has long held in Lafayette.

Broadcast affiliates in a cable company's designated market area can opt for what's called "must carry," whereby the cable operator is obligated to carry the station for no compensation (must carry applies only to analog). If the station chooses to negotiate "retransmission consent" of its over-the-air signal, the two parties decide on any number of payment options. Sometimes the cable company pays per subscriber, like it does with CNN and ESPN, with on-air advertising or by carrying digital broadcast sub-channels. Also, the cable company may compensate the broadcaster through partnerships for local news re-run channels like WWL's NewsWatch 15 in New Orleans. In some retransmission consent cases, however, there is no payment or exchange of value because the cable company typically increases the signal's reach and quality, which enables the station to reap greater ad revenue.

Shenkan says he can't fathom a situation that would result in KATC removing itself from Cox's cable system, where it reaches 114,000 households in a six-parish area under a must-carry agreement.

"I respect [Barras'] judgment, but his business plan is not my business plan," the KATC official says. "The rules have changed, and we're going to aggressively seek out every platform available to us. There will be others as the future unfolds."