Hainam heats up Lafayette's Asian buffet business. And dim sum is on the way. By Anna Purdy

I can guess what you're thinking - yet another Asian-inspired buffet in Lafayette with virtual troughs of food stacked in row upon row of heart-unhealthy offerings? In the words of one Ron Popeil, but wait! There's more!

Hainam heats up Lafayette's Asian buffet business. And dim sum is on the way. By Anna Purdy 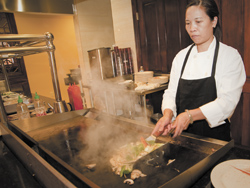 The Mongolian grill at Hainam

I can guess what you're thinking - yet another Asian-inspired buffet in Lafayette with virtual troughs of food stacked in row upon row of heart-unhealthy offerings? In the words of one Ron Popeil, but wait! There's more!

Hainam opened at the end of August on Kaliste Saloom Road near its intersection with Ambassador Caffery. This is its second location, the first being a longtime favorite of Abbeville residents. At $7.95 for a lunch buffet and $12.95 for dinner and all day on Sundays, this is a different sort of buffet.

First off, Hainam offers a lot of healthy fare. Freshly baked seafood and bright vegetables steamed to a healthy green are plentiful and delicious. Most buffets prepare dishes so quickly that some foods requiring little cook time are overcooked (I'm sure you've seen broccoli that looks liked rotted, felled trees in a forest).

The healthful items tend to be grouped together. Hainam really seems to take pride in what is offered.

If that isn't your favorite option, head on over to the Mongolian grill and make your own plate. Having a Mongolian grill as a buffet option is terrific. You can look at the options - vegetables, sprouts, rice, noodles and meats - and put it on a plate. The man or woman operating the hibachi makes your meal right there in front of you using the sauces, if any, that you want as part of your meal. Not only is this great for those mindful of their health, but if you have vegetarian friends or those with dietary restrictions like celiac disease or allergies, they can readily monitor what they eat.

The restaurant is owned by husband and wife Richard Miller and Xue Mei Yang. Yang was sent to the U.S. to study in 1989 after her father, who was in the military, was concerned about his daughter's safety following the Tiananmen Square massacre. From here, her love of restaurants continued to grow and after operating Hainam in Abbeville for a number of years has now opened this one. "My wife has always wanted a big restaurant," says Miller, who functions as manager.

Miller says plans are in the works to begin offering dim sum. The rounded triangles of dumplings popular in Asian cuisine are a beloved treasure to some. If you are in that camp, welcome aboard. Hainam's dumplings won't have the thick dough so many Asian restaurants have, which is easier to work with and less prone to breaking but not nearly as tasty. Hainam's will be thin and tender, the emphasis rightly put on the lump of meat and veggies in the dumpling's filling. For dumpling lovers, throwing down eight bones to eat all the dumplings you want is manna from heaven.

Another favorite is the Imperial Shrimp. The shrimp were spicy and had depth, not shirking the sweet seafood flavor but highlighting it with a spicy, light sauce made from chili flakes. Paired with the sauteed mushrooms and onions it was a perfect combination.

With its great value and well-made fare, Hainam isn't just a welcome addition. It is stiff competition for the other buffets in town.