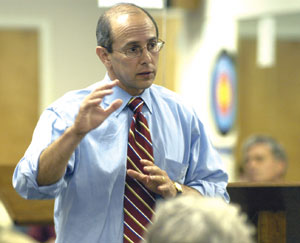 First, his home state of Texas slapped him with an indictment for shady cash transactions. Then, as a result, he lost his powerbroker post as majority leader of the House of Representatives. Eventually his old cohorts ' even fellow GOP legislators ' started backing away from him. Some went as far as to return campaign contributions, as everything connected to Tom DeLay has a tainted glow.

That includes his political action committee, Americans for a Republican Majority, which is commonly referred to as ARMPAC. The high-voltage federal fund has doled out more than $3.5 million to GOP candidates since 1994. Louisiana's Republican congressmen have received $60,034 alone, and at the top of list is Rep. Charles Boustany Jr., who has collected about $25,000 since he entered the political fray in 2004.

ARMPAC lost some of its luster last year when Executive Director Jim Ellis, as well as other DeLay aides, were indicted by a grand jury for money laundering ' a first-degree felony. ARMPAC as an entity, however, has not been charged with any wrongdoing. It's DeLay's state PAC ' "Texans for a Republican Majority" ' that has landed the politico in hot water. DeLay was indicted in September for allegedly using the Texas PAC to funnel corporate money to several legislative candidates in the Lone Star State.

Still, recipients of money from ARMPAC are getting pummeled by special interests to return their contributions to DeLay. When asked what Lafayette Rep. Boustany would do, his press secretary Amy Jones questions the timing of the query.

"This is an old issue," she says, and adds that Boustany has no plans to return the money.

As far back as fall 2004, political groups like the Louisiana Democratic Party were asking GOP candidates to recoil from the DeLay money. For some, it became a major election issue in their last campaign. But special interests are finding ways to breathe new life into the issue, with hurricane survivors at the forefront.

For instance, the Campaign for America's Future recently launched a public appeal asking lawmakers to donate the equivalent of whatever DeLay granted them to the Bush-Clinton Katrina Fund, a charitable pool organized by the former U.S. presidents. Campaign for America's Future bills itself as a progressive think tank, and has a "rogues gallery" of politicians on its Web site that includes Democratic Rep. John Tanner of Tennessee and Republican Rep. Bob Ney of Ohio.

Ellen Miller, deputy director of Campaign for America's Future, says her group's call to action is more relevant than ever with the formation of the hurricane fund. "Washington is engulfed in corruption," she says. "It's time for members of Congress to stand with the people and show that, in this time of great national need, the charity chests are more important than political war chests."

Even before the campaign was launched, Rep. Kenny Hulshof of Missouri cleared the way for such thinking by donating his $15,000 DeLay contribution to the Bush-Clinton fund. His spokesman later said the congressman wanted to "disassociate" himself from the situation. Rep. Steven LaTourette of Ohio soon followed pace, and two more lawmakers ' Reps. Jeb Bradley of New Hampshire and Heather Wilson of New Mexico ' are playing catch-up, vowing to return the money but not yet announcing their intentions, according to published reports.

DeLay hasn't been convicted of anything, but perception is weighing him down. His reputation took another hit recently with an Associated Press report that Delay's various organizations have spent more than $1 million on top-of-the-line luxury accommodations and lavish meals during political fundraising trips.

For now, Boustany appears unwilling to break party ranks and is rolling the dice in hopes that Delay will be acquitted of campaign finance violations. But Boustany spokeswoman Jones says it's not out of the question that Congressman Boustany would eventually rid himself of the $25,000 in DeLay contributions.

"If at any point there would be an indictment that showed a violation of federal campaign law with ARMPAC, then we would certainly donate the money," Jones says. "But we would end up trying to find something local inside the district to give the money to."

Contact Jeremy Alford through his Web site at www.jeremyalford.com.