Hot Food Express is one of those spots that can only come out of the cultural mire that is Louisiana.

Eclectic mix of food and music marry on Cameron Street. By Anna Purdy 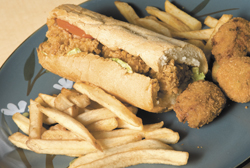 Hot Food Express is one of those spots that can only come out of the cultural mire that is Louisiana. The restaurant is located off of Cameron Street just a mile or two shy of Lafayette's Four Corners. The menu features everything from shrimp poboys to high protein meals to Indian food and in between. Adjacent to Hot Food Express is Café NYC, which has become a sleeper contender for a late night music scene. Mainly featuring DJs, Café NYC has dancing and music several nights a week. The marriage between Express and NYC is fantastic and, once you are in its arms, completely makes sense. Express has tons of music paraphernalia on its walls, from a Jay-Z vinyl to autographed pictures from Madonna to local musician Chris Himel and the Saints' Kevin Faulk. There are autographed pictures of hiphop hopefuls and a female bodybuilder. The marriage between food and nightclub continues with the Buzz Box special: the special plate lunch of the day plus one beer and one shot. The small area to eat in is airy and pleasant and has the feel, oddly enough, of a Happy Days diner - not the real '50s thing but a sunnier and more modern version. The shrimp poboy was stuffed with a tomato so red it was mistaken for a bell pepper and the shrimp were fat and lightly fried. The poboys come dressed in the traditional way, so ask them to 86 the mayo, lettuce, etc. if it isn't what you like.

For fun we tried the Crawfish Kickers, which are essentially a wee fried ball of crawfish and spices, kind of like a boudin ball but with that kapow of crawfish taste. If you are feeling health conscious, no problem - Hot Food Express features plenty of salads and grilled shrimp, steak and chicken. The grilled chicken we had was full of flavor and tender after being marinating for some time in a concoction that gave it a Mediterranean, Middle Eastern twang. The daily specials, called H.F.E. Value Boxes, are $4.63, and that is what the shrimp poboy was the day we went.