A lifelong stutterer, flutist Roldon Brown speaks eloquently through his music.
By Emily Henagan   Photo By Robin May 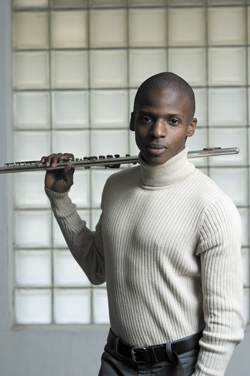 When Roldon Brown ordered two mini chocolate chunk cookies at CC's Coffeehouse, he labored to articulate the request because of his severe stuttering. When he plays the flute, he releases the most beautiful, eloquent notes with the simplest of ease, his voice in his music.

"If you want to see who can set a record for taking the longest time ordering a double cheeseburger and fries, it's me," jokes Brown, 25. But he hasn't let his stuttering or his financial straits derail his career.

"Everywhere I go, I'm playing on the cheapest flute," Brown admits. "You just really have to work for it and want it. It's not going to be easy, but you can't let things stop you."

Brown says having a stutter makes him see how patient others are, as well as himself.

"It certainly makes life a little more complicated than it has to be sometimes," admits the UL Lafayette alumnus. "You get used to it though. It teaches you how to read people quickly; it shows the core of that person super fast. And you learn to be more patient with yourself - that's the biggest test."

A hometown prodigy, Brown tested his and his family's dedication to his musical prowess.

Raised in a house near the Lafayette Utilities System's plant, Brown had a meager upbringing. His parents divorced when he was 6 years old, and although his father helped out, he says his family was still poor.

"I grew up thinking we were rich, but we obviously weren't," he says. "My mom made it seem like we were, though. She did lots of tiny things that made life fun; it felt like we had the world."

Those "tiny things" included water gun fights within their home and driving the family through nice neighborhoods to show her children tangible things to aspire to.

"If I could have half of her discipline and strong mind, I'd be completely set," says Brown.

Brown is also set on the tennis courts, competing in tournaments and playing competitively. He won at the Lafayette 3.5 Flex League twice and the 4.0 Flex League once.

"Playing tennis and playing the flute gets you in the mindset to keep practicing," says Brown, three-time winner of the UL concerto competition.

Brown is throwing a benefit concert for himself on Saturday, Oct. 1, at UL's Angelle Hall so he can practice and hone his craft with one of his idols, Mathieu Dufour, in Chicago. Dufour holds the first flute position within the Chicago Symphony.

"He's just a super great person," Brown says of Dufour. "Lots of people at that level are disconnected from the students, but what struck me the most about him is that he is so down to earth."

Brown says he hopes to follow in Dufour's footsteps one day.

Andrea Loewy, Brown's flute instructor for six years, believes he has what it takes to get there. "There is an intensity and passion in his musical approach," says Loewy, a UL music professor. "He has a beautiful, warm sound that is technically fluent and flowing. Also, he shows an extremely high sense of motivation, drive and talent for his craft."

"Growing up, I wanted to be a lawyer or pilot," says Brown. "With the flute, though, it just clicked. There was never any moment that I said, I don't want to do this.' It just clicked that this is what I want. Being competitive with myself made me want to do it on a high level. The flute is just special. It's just amazing - the overall feel and sound of it. I'm calm when I play the flute."

You can also help Roldon Brown raise funds to continue his flute studies by making a tax-deductible donation on his behalf to the Allen J. Celestine Foundation, a Lafayette-based 501C(3) that raises funds to help underprivileged youths further their educations. Donations can be mailed to 638 Carmel Drive, Lafayette, LA, 70501.