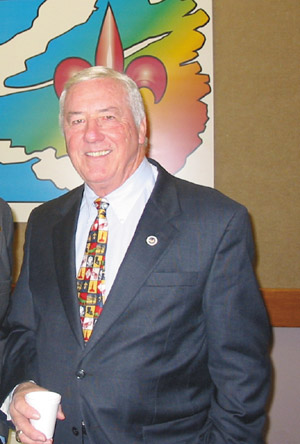 On Monday morning, state Rep. Ernie Alexander surprised many supporters when he posted a new column with a Shakespearean title on his Web site. Titled "to be or not to be," the missive stated, "Today, I am undecided as to whether I will seek re-election or not." As recently as last week, Alexander indicated that he would be running for re-election, and felt that he might be in line for a high-ranking committee chairmanship position if a Republican governor is elected this fall.

However, with strong competition lining up to challenge him for his District 43 seat, Alexander is now considering calling an end to his nearly 20-year career in local politics. "I'm torn," Alexander says. Alexander was a supporter of two-term limits for legislators before the three-term limit passed, which is another factor now giving him pause about running for a third term.

"The pressure is on me to come up with a decision," he adds, "and that's why I put it on the Web site. Because if I decide not to run, I've got to let people know who might be interested in running that the opportunity is there."

Already gearing up to challenge Alexander is Page Cortez, a 46-year-old Republican and co-owner and operator of La-Z-Boy Furniture and Stoma's Furniture and Interiors. Cortez, who plans to officially announce his candidacy within the week, has already lined up an impressive campaign organization. In one week's time, he's raised $40,000. A host committee including Schilling Distributing Co.'s Herb Schilling and local landmen Rusty Peyton and Mark Hopkins is planning a fundraiser for Cortez on Aug. 20 at the Petroleum Club. A former high school coach and teacher, Cortez has a good reputation and is heavily involved with several community organizations including the Miles Perret Center and the Acadiana Outreach Center, as well as serving on the city's Parks and Recreation Commission. And as a furniture salesman, he's already been on TV for years.

Cortez respects Alexander, but says this is an election he can't pass up. "I've been considering this for a long time," Cortez says. "There's going to be a new governor and a whole new legislature to speak of and I want to be a part of that change."

Cortez paid a courtesy visit to Alexander last Saturday to tell him he was running. "We had a great 45-minute conversation," Cortez says. "And he is a honorable man who has served very well on the council and he's served the community and I respect him for that and I told him that. But it was just a feeling that it was my time and I had to get involved or else I would have regrets down the road." Cortez also made the rounds to every other elected official in the area. "Out of courtesy, I thought it was right to let them know that I was entering the race. And I know most of those guys personally. I wanted everybody to be aware that I was getting involved and each and every one of them has been very sincere in saying, 'Congratulations and good luck and I think you'll enjoy the process.'"

For Alexander, who hasn't faced political opposition in eight years, the prospect of mounting a sizeable campaign may be daunting. On his campaign finance report for the end of last year, Alexander showed only $11,090 in campaign funds on hand. Alexander also has concerns about the political organization that appears to be backing Cortez. In his Web site column, he wrote: "It is not the challenger which gives me pause, it is the organization which is supporting the challenger." Cortez's supporters include Andre Fruge, president of Louisiana Capital Certified Development Company, one of the fundraisers and campaign organizers that helped fund and elect state Sen. Mike Michot and state Rep. Joel Robideaux.

Last week, Alexander went to clear the air with Michot, whom he considers a friend. "Ernie came to see me," Michot says. "He was very concerned that it would look like me as a Republican would be putting up a challenger against another sitting Republican. But there's no reason for me to be against Ernie Alexander."

Michot and Cortez were fraternity brothers together at UL Lafayette and have many mutual friends, some of whom are now working on Cortez's campaign. However, Michot says neither he or Robideaux convinced Cortez to run. He maintains that he and Robideaux, who together formed a Political Action Committee called Leadership for Louisiana, would likely remain neutral in any race between Alexander and Cortez.

"We did not put him up," Michot says. "Me and Rep. Robideaux are not sitting in some back room deciding who's going to run for the next office. [Cortez] is a man that's interested in serving and feels like he can do some things for the community. I don't think we can fault people that want to put themselves up and want to run for public office."

Alexander emphasizes that it's not the challenger that is swaying him against running. When Cortez paid him the courtesy call last Saturday, Alexander told him that he looked forward to the campaign. Two days later, the 74-year-old Alexander, who has served almost two decades as both a city councilman and then state representative in Lafayette, is considering whether the time is right to walk away from politics.

"I've really got to think long and hard about it," he says. "There comes a point in time where you just really need to think about is it time for me to step down or not. The primary [question] is, 'Am I going to do the eight years that I was originally committed to do and just get out of there, or am I going to stay in?' I just don't want any real ill will toward Mike and Joel. I really have got to sit and my wife and I have been discussing this for a few days. Of course, she's very encouraging, she wants me to run. And I'm just going to have to see how this goes."

Sen. Michot, who has known retired broadcaster Alexander for many years, says if Alexander decides to run, the residents of District 43 will have two quality candidates to choose from. "I work extremely well with Ernie," he says. "I have the highest respect for him and the job he's done. A political race is healthy. Everybody's entitled to get involved in the process. And if good people want to put themselves up, we ought to be proud of that and let the public decide who they want to represent them."