A 22,000-square-foot location of The Fresh Market grocery store opens the door for more development in River Ranch. 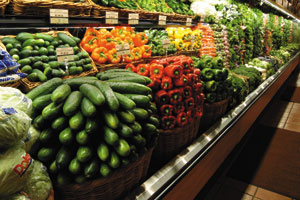 The $5.5 million Fresh Market won't open its River Ranch doors till next spring, but the North Carolina-based specialty grocer is expected to fuel millions in construction for Lafayette's first "lifestyle" shopping center, The Market at River Ranch.

"The Fresh Market will jump start approximately $30 million in construction in the Market area up front over the next 12 months," says River Ranch developer Robert Daigle. Work on the 22,000-square-foot grocery store, which a company spokesman refers to as "old-world European markets under one roof," starts in about two months.

Daigle's mega-investment includes retail, apartments and condominiums on a 20-acre site between Main Street and Kaliste Saloom Road. Already under way, Main Street begins at Camellia Boulevard and will extend across River Ranch Boulevard to the traditional neighborhood development's eastern boundary, where it'll connect northward on Settlers Trace and southward on Kaliste Saloom. Taking its cue from "smart growth" principles, the "main street" term dates back to small town developments that attracted boutique retailers to an inviting pedestrian environment. This one incorporates a boulevard of trees and features a central fountain.

Five years ago Daigle set out to secure what he believes is a critical component to a true lifestyle center atmosphere in River Ranch; he's predicting this anchor tenant will generate a firestorm of leasing activity over the next few months. "We've held off on all leasing until we announced Fresh Market because of the value it brings," he maintains. Simultaneous with the Fresh Market construction, River Ranch is investing in a 23,000-square-foot shell next to the store for "high-end apparel" or a "major bookstore," says the developer. "With that kind of anchor, we will get the tenants we want."

These so-called lifestyle or open-air centers are eclipsing the traditional mall concept in national retailing. They tend to incorporate a pedestrian-friendly environment of green space and heavily landscaped gathering areas and attract mostly chains, both large and small, including restaurants. "Lifestyle centers are generally developed around food, apparel or home furnishings," notes the developer.

The Mall of Acadiana's new owner, CBL & Associates Properties of Chattanooga, Tenn., last year hinted it may undertake this type of shopping center outside of the mall, but nothing has materialized.

Daigle would not say which retailers he hopes to attract, but Fresh Market also has been locating next to some highly sought-after national chains. In Louisiana, Fresh Market's only Louisiana store is in Mandeville, but the company is opening a location on the same time schedule as Lafayette's in Baton Rouge developer Tommy Spinosa's Perkins Rowe. Now under construction, this $350 million 60-acre lifestyle center at Perkins Road and Bluebonnet Boulevard, which dubs itself an "urban village," is anchored by Cinemark theater and Barnes & Noble. Regarded as Baton Rouge's most ambitious mixed-use project, it also has condos and office spaces. Tenants include Bally's Fitness, Baker St. Pub & Grill, Pei Wei (an Asian restaurant from the creators of P.F. Chang's) and Texas de Brazil (a Brazilian steakhouse). Clothing stores announcements are expected soon.

Existing tenants in The Market at River Ranch now consist of only CVS Pharmacy at the corner of Kaliste Saloom and Camellia and Bonefish Grill, with additional ' mostly speculative ' retail to the left and right of Bonefish already under way. A new CC's Coffeehouse (River Ranch's second CC's) with a drive thru anchors a 9,000-square-foot project being built on Camellia at Main Street. A dry-cleaner and two smaller, fast-casual concepts, including an undisclosed Tex-Mex chain, will locate there.

In three months, construction begins on a 20,000-square-foot project on Main Street that includes Another Broken Egg Café, a wildly popular breakfast joint with four restaurants in Florida and a Louisiana location in Mandeville. A French-country style café also serving lunch, the eatery offers a full bar (with to-die-for Bloody Marys) and has more than 120 menu items. Broken Egg backs up to Bonefish and incorporates al fresco dining; next to it are five retail spaces, and above them five apartments. Just across Main Street in the same area is another massive project almost halfway through construction ' 25,000 square feet of bottom floor retail space and three additional stories featuring 238 apartments and condos. "You'll actually have people living in the first building by the end of August," Daigle says.

North of Fresh Market ' fronting Main Street extension and River Ranch and Settlers Trace boulevards ' are 4 acres that will be developed into more retail and 100 loft condos, a mix of one- and two-bedroom units targeting young, single dwellers. The condos start at $150,000. "We're appealing to a generation that likes to be where the action is," Daigle says.

River Ranch now has 600 families, but that density will increase to about 1,000 by the time the specialty food store opens next year. Daigle believes the impact of traffic on this busy thoroughfare will be mitigated by two infrastructure improvements in the area, the lengthening of Camellia to Verot School Road and the likely extension of Ambassador Caffery south to Hwy. 90.

Over the past few years, River Ranch officials made no secret of their wishes to secure either Whole Foods or Fresh Market. Whole Foods is a favorite in New Orleans, and its new store in Baton Rouge has been equally well received. Daigle acknowledges some local residents may be disappointed that River Ranch did not snag Whole Foods, the Texas-based chain that places all of its emphasis on all-natural and organic products ' most packaged under its own label.

"They're both great concepts," Daigle says. Whole Foods, however, just wasn't moving fast enough. "Fresh Market was further along in their decision-making process, [but] had Fresh Market and Whole Foods come to us simultaneously, we would probably have gone with Fresh Market anyway, because of limited real estate up front," he says.

Whole Foods' stores offer vitamin/supplement divisions and have begun incorporating restaurants and coffee shops, forcing their average size to about 50,000 square feet. "That's the main difference between what they handle and what Fresh Market handles. It would have been total duplication of uses on the restaurant and coffee shop side," notes Daigle. But the stores have a lot in common.

"We are a very healthy store, and we have lots of organics, [but] we don't have a mandate to carry organic," says Eric Blaesing, Fresh Market's director of community relations. "It's absolutely not a health food store; it's high quality perishables." Like Whole Foods, Fresh Market's focus is on fresh produce, seafood (including sushi), meats, a bakery and prepared foods.

The mini-markets concept is "kind of like what you'd see on the streets in New York," Blaesing says. "We also are, generally speaking, considerably less expensive than Whole Foods. We're priced like a supermarket." The Fresh Market spokesman says his store also offers some common household brands, another competitive advantage.

Lafayette resident Dr. Grant Lashley likes that name-brand staples like Coke and Heinz Ketchup are available at Fresh Market vs. Whole Foods, which does not sell national labels. A seasoned Fresh Market shopper, Lashley says the store will not disappoint. The North Carolina native, who recently relocated to Lafayette, knows the Berry family that started the concept in Greensboro, N.C., in 1982. The 55-store chain is still a privately held, family-run operation with most of its stores in the southeast.

Blaesing says his company does not aim to be a one-stop shopping destination, as it doesn't offer common items like cigarettes or baby food, but rather to complement the supermarkets in an area.

The more intimate atmosphere of Fresh Market's store is appropriate for River Ranch's neighborhood setting, according to Lashley. "We could go there and get out in about 10 minutes. It's really a size that you can still enjoy shopping," he says. "If you haven't had the experience of Fresh Market, you just don't know what you're comparing it to. It's equally as nice a store; it's just a little more quaint."

In Lafayette, Fresh Market presents a new competitor for independents like Joey Beyt of Joey's on Bertrand Drive, which specializes in fresh meats, wines and prepared dishes. While he's concerned about the impact, Beyt says he deals with new competitors regularly. "Restaurants are more competition for us, bigger than a grocery store," says the local grocer, who's been in business 25 years. "It makes everyone stay on their toes even more," adds Beyt, who wonders if south Lafayette can support another grocer. "It'll be interesting to see."