Cell phone companies like AT&T and Verizon push the boundaries of wireless communications.

Cell phone companies like AT&T and Verizon push the boundaries of wireless communications.

Last month, NPR broadcast a story titled "For Software Developers, A Bounty of Opportunity." The gist was that as the country suffers from a high rate of unemployment, the software development industry can't hire qualified employees fast enough. Job options for software engineers are endless as the application market for iPhones and other smartphones continues to boom, and the story pointed out that as software plays a bigger role in our lives, the need for it and people to write the programs will only continue to grow.

Smart technology isn't just for tekkies anymore. Everyone from teenagers to grandmas have an iPhone, and the plethora of wireless devices on the market really do make our lives easier. Refrigerators that keep track of our food and make shopping lists for us. Apps that tell us if we need to leave the house with an umbrella or not. Cell phone add-ons that let parents where their kids are. "The whole horizon is infinity on how you can use wireless networks," says AT&T Gulf states Senior Public Relations Manager Sue Sperry. 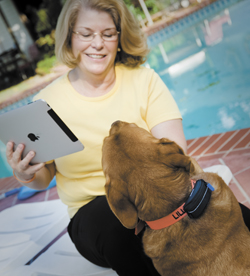 In 2008, AT&T created a division called "Emerging Devices" to fuel ideas for mobile applications and solutions. A Developer Program was also created, allowing developers and app inventors to pitch their ideas to the company and have them launch with the support of AT&T. Since then, AT&T has certified more than 940 devices, from netbooks to digital photo frames and personal navigation devices for use on its wireless network. It also estimates that there are close to 11 million emerging devices connected to its network at any given time.

Customers can find many of these devices in AT&T retail stores, and some of the latest focus on the health care industry and keeping track of everything from pets to kids. Sperry is currently touting Vitality GlowCaps, which screw onto the tops of medicine bottles to help patients remember to take their pills.
"One big issue in health care is keeping seniors independent, and one of the big obstacles is medication compliance," she says. "When you get to a certain age, and you have to have your heart medicine, you've got to take it every day."

The caps use light, sound, text message and phone alerts over AT&T's wireless network to remind patients to take their medicine and even go as far as to notify their doctor if they don't. Available on Amazon.com later this year and through certain health care programs like Express Scripts, the caps cost $10 each and about $50 a month on a customers' data plan.

For parents and pet owners, Sperry recommends the new Garmin GTU 10, a waterproof device that can be attached to anything from bikes to backpacks and dog collars. Customers can then track movement through their phone or computer, which is especially helpful if the item is lost or stolen. "It has a million and one uses," says Sperry, who suggests parents give one to their children for things like senior trips or keep one on the car in place of a LoJack transmitter if it's stolen. Devices cost $199 and include a year of wireless service, but after that the plan is just $49 a year.

Sperry explains that these types of devices don't use a lot of bandwith, hence the low prices. That doesn't mean AT&T's network doesn't need to be equipped to handle them though. The company has learned from past mistakes, like being short on capacity when the iPhone started to take off and Verizon beating it to the punch on becoming the exclusive wireless provider for the Amazon Kindle in 2009.

In preparation, AT&T is accelerating plans for its 4G buildout and currently completing major upgrades throughout Acadiana. "We're essentially upgrading a lot of the hardware, the boxes and switches," explains Sperry. "They have been changed out and upgraded to allow more capacity." The company also plans to purchase T-Mobile, which would give it better coverage in rural areas. "It's the way we can reach out to the rural community," AT&T Regional Director Donna Byrne says. "It is our way to take broadband wireless and not worry about a wireline infrastructure."

But that won't be an easy road. On Aug. 31 the U.S. Justice Department filed suit to block the $39 billion merger - calling it anti-competitive. Byrne, however, believes AT&T will prevail. "We have been and remain interested in a solution that addresses the DOJ's issues with the T-Mobile merger," she says. "The department left the door open for further discussions." Those discussions will be confidential, so the public won't be privy to them, Byrne notes. "On a separate path, we'll seek an expedited court hearing to respond to the DOJ's complaint. We remain confident that we'll reach a successful conclusion."

Among the merger's benefits, according to Byrne, are additional wireless network capacity to improve service, expanded Long Term Evolution, or LTE, deployment to 55 million more Americans, which she says is another $8 billion investment, and "a commitment to bring jobs back to the United States."

Sperry says the No. 1 issue for rural businesses is not having access to a wireless network. Many of the company's emerging devices are geared toward helping both small and large businesses streamline processes and ultimately save money.

Local Business Account Manager Britt Guillory notes an electronic dictation device popular in the legal and health care fields, virtual receptionist called Office at Hand, a tracking program for companies managing a fleet of vehicles that's similar to OnStar, and Xora, a program that allows companies to track the GPS locations and activities of mobile workers through an AT&T phone.

"Truly, it's amazing what these smartphones are capable of now," he says, "and on our network, with all of the applications out there, as far as small business is concerned, it's such a huge benefit to the customer, and they're starting to realize it."

While AT&T readies itself for wireless growth in the ballpark of 300-500 percent in the next three years, other cell phone companies must do the same. Verizon Wireless also has a developer program for apps and hosts a Developer Community Conference each year.

"The past two years have seen a big boom for app developers," says Verizon's public relations manager, Gretchen Whitaker. "We allow the programmers to develop their specific apps and programs on our system, and we work with them to make sure it's compatible."

Verizon had a limited presence in Acadiana before it purchased Centennial last year. Since then, the company has greatly increased its local customer base, while working on its own 4G network.

"We just recently completed our integration of all the Centennial properties," says Whitaker. Although based in the company's Houston office, she is a native of Crowley and understands how unreliable cell phone service can be in rural areas. "We now have the same footprint Centennial had and a lot of increased rural coverage," she says. "My dad has great coverage at his hunting and fishing camp in the middle of nowhere."

Like AT&T, Verizon is upgrading its network to 4G in phases. New Orleans was completed last year, and Baton Rouge is in the works now. "We'll move on to other areas throughout 2012," Whitaker says.

While Verizon makes inroads in the Louisiana market, Sperry says AT&T welcomes the competition. "It drives innovation and is good for consumers," she says.