If I were a betting man, I'd put money on this trio.

If I were a betting man, I'd put money on this trio. 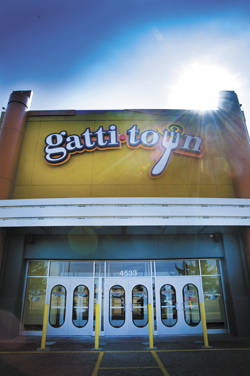 Look for more changes to Grand Marche, home to a successful Gatti Town, in 2012.

If you've ever bet on a horse race, you probably know that some people win more often than others. But do you know why? The Daily Racing Form (clever name) updates every day and is loaded with critical and current details to aid bettors in handicapping. While the horses are key, there are many other important factors in horse racing. Owners, trainers, jockeys, veterinarians, weather and track conditions are all as integral to victory as the horses themselves.

Site selection is a lot like picking good horses. Unlike horses though, locations have a much longer potential life cycle and can defy the handicappers' odds and finish strong.

I'm sure you've often wondered why a particular business has failed when another one like it has enjoyed tremendous success. I have been in the commercial real estate business for 20 years now, and I still find myself trying to figure out the most successful formulas. As sites and facilities have become more expensive, the site selection process in corporate America has become more precise and scientific. Demographic information is now updated quarterly, and analysis is becoming increasingly complex. And yet, businesses still fail - even those in good locations. There are three new bets coming to town. All are recent notable commercial transactions  that I believe possess "come from behind to win" characteristics.

Gatti Town in Grand Marche Shopping Center on Johnston Street. Located in one of Lafayette's oldest retail centers, the Gatti space has frequently been referred to as a bad location. Two pizza concepts failed there, but both were under the same ownership and management (bad jockey and trainer). So let's look at the earlier history of the space. Wal-Mart first occupied it and sold enough goods to justify moving into a new Super Center on Ambassador Caffery. Next came Academy Sports and Outdoors. Its sales were so good that it built, also on Ambassador, what at the time was the largest store in the country. That Academy now ranks as the top store in sales among its approximately 140 locations in the southeastern U.S.

Gatti Town, the superstore version of Mr. Gatti's Pizza, is well managed and, according to commercial broker Ryan Pécot of Stirling Properties, the location's sales are very strong. Also, look for new and interesting changes at Grand Marche Shopping Center in 2012.

Serranos Salsa Company, f/k/a Booty's and before that Toucan's, on Johnston at Doucet Road. I think this is a great restaurant site that has suffered from very poor ownership and management in its first two lives. The Serranos concept never seemed to gain traction in Lafayette and was eventually closed, with the facility being held by the same ownership until now. The good news is that Lafayette diners will soon have a new restaurant with longtime LaFonda General Manager Gabo Bako welcoming customers at the door. Another of Pécot's deals, this is expected to be an instant hit and "new tradition" with Lafayette diners.

Southern Structures facility at 916-920 Young Street in Youngsville. Acadiana people remember the days when Southern Structures was a bustling company that ranked among Acadiana's largest employers. After changing hands more than once, the company filed for bankruptcy and ceased operations. Sitting vacant for 2-plus years, FM Bank sold the industrial property to Schilling Acquisitions, headed by Herbert Schilling and represented by attorney Tim Ryan of Williams, Anderson & Ryan. Real estate brokerage was handled by Sam Robertson and Art Barry of Sam Robertson Real Estate and Hammy Davis of Coldwell Banker. The property is situated less than two miles from U.S. Hwy. 90 and contains two industrial buildings (20,000 square feet and 149,000 square feet) and one 11,000-square-foot office building. The 20,000-square-foot building was recently leased to an industrial supply company, and plans are being finalized for the larger industrial building and the office building.

We should all be excited to have these properties back in commerce. Two are providing jobs and dining and entertainment for our community and the other offers existing companies the ability to expand and could potentially attract new industry to Acadiana, adding to our tax base and creating employment opportunities in our area. If I were a betting man, I'd put my money on all three to win.