Wednesday, September 28, 2011By Gregg Gothreaux
**
Great cities have great public spaces, and Lafayette is recognizing that.
** 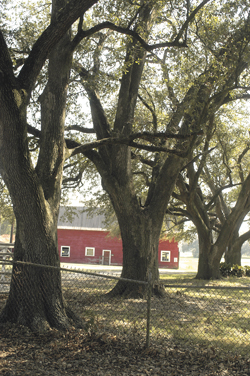 Great cities have great public spaces, and Lafayette is recognizing that.**

Green space isn't just something that is aesthetically pleasing; it plays an important role in the psychological, environmental and economic life of those around it. The Trust for Public Land, in its 2010 City Parks Facts report, looked at the largest 85 U.S. cities and compared public park acreage to total city acreage based on the population density of the city. While Lafayette was not included in the study, we can learn a lot by comparing our numbers to those from the report.

The city of Lafayette currently has 971 acres of public park space. With just more than 31,000 total acres in the city, park space accounts for 3.1 percent of the total acreage in the city. When compared to the median of 5.8 percent, for the 26 cities in the low population density category, and the overall national median of 8.3 percent, our community, unfortunately, falls short.

This is where our wildcatter mentality and spirit kick in. The city of Lafayette has an opportunity that many city leaders across the country would love to have - there are 100 acres of centrally located, undeveloped land the city can use to create a publicly-accessible "Central Park."

The Horse Farm, located on Johnston Street, was a working farm operated by UL Lafayette until the mind 1990s and housed the university's Equine Center for many years. After more than 100 years of agricultural use, many individuals in the community feel the best use for the land in the future is as a public park. The addition of the 100-acre Horse Farm property would increase Lafayette's park acreage by nearly 10 percent; however, the ratio of park acreage to total acreage in the city would still fall below national numbers at 3.4 percent. For a perspective of how large 100 acres is, consider that five Girard Parks can fit into the Horse Farm.

What are some of the benefits you, your business and your community could see from additional green space?

Dr. Kathleen Wolf, a research social scientist at the University of Washington who specializes in urban forests and ecosystems, says her research supports the idea that business recruitment and relocation efforts can benefit from green spaces. The increased quality of life that can result from community green space can be a driving factor in determining where a business might locate. Wolf's research also shows that in a retail setting, trees and greenery positively influence consumer responses and behavior.

According to Project EverGreen, a group committed to informing the public about the positive effects of well-maintained green spaces, communities with developed green spaces can see psychological and health effects. These places not only see a decrease in stress and road rage, but also crime and vandalism. In addition to strengthening our sense of community values and quality of life, the community will also see increased property values.

A new city park for Lafayette can also improve many environmental factors, such as air and water quality. Trees and shrubs help remove pollutants from the air, while also reducing the amount of nitrate that enters our water supply from the soil and keeps other pollutants out of our waterways. More green space may also offer some relief from searing summer temperatures. According to NASA, increased green space in communities helps lower temperatures. In Atlanta, researchers found that the temperatures in the city are 5 to 8 degrees higher than the green countryside around it.

Lafayette has a long list of resources that make it a great place for economic growth, and this new green space, once completed, will be a great addition to the list. Community and civic organizations are looking to get involved in the movement - assisting with use planning and fundraising for long-term operation and maintenance.
You may wonder why having more public green space is important to LEDA and our business development efforts. The creation of a central park at the Horse Farm will undoubtedly increase the quality of life and social opportunities for residents and tourists alike. Having additional green space options makes the community more desirable to entrepreneurs looking to open their next location and to talented workers looking for their next job. For example, Schumacher Group's recently announced expansion will create 600 new jobs, some of which will likely be filled with relocated workers. To keep and attract the most qualified employees, Lafayette needs to maintain and strengthen our high quality of life, and a city park for recreational and educational use can help do just that. Employment opportunities are born from the creation and maintenance of a green space like the one planned, and tourism dollars in Lafayette will likely see an increase also.

Lafayette is already considered a Top 100 Place to Live, according to Relocate America, and the community can only benefit from this new city park. We're on the verge of going from good to great.