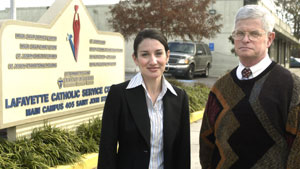 There was a time not all that long ago when the line of people seeking assistance from Lafayette Catholic Service Centers wrapped its way around the organization's St. John Street offices. Most days, displaced families ' many of them left without homes and resources by hurricanes Katrina and Rita ' began queuing up as early as 5 a.m. Some slept in the parking lot or on the sidewalk out front to make sure they would receive a Wal-Mart gift card or help with filling a prescription that day.

The long lines aren't there any more, but Executive Director Bill Charbonnet and Director Kimberly Jones say things are still far from normal. Evacuee needs have been substantial over the past four months, and Lafayette Catholic Service Centers has provided more than $300,000 in assistance to more than 5,000 families. "As soon as we receive it, we're spending it," says Jones, who points out that the center is deducting no administrative costs from hurricane donations. "Every dollar we get is distributed."

Charbonnet estimates that, for the year, donations to the center could be up by as much as 100 percent, if hurricane-related gifts are included. "The giving is very generous," says Charbonnet. "We are way up, and we have spent it all. It's not like there wasn't a need. But the problem is that our regular programs are going to suffer."

The duo says contributions for the services center's pre-existing programs ' community programs like St. Joseph Diner, the Monsignor Sigur Service Center and Opelousas' New Life Center ' have been down by as much as 50 percent for the past several months. These kinds of unsolicited, individual donations usually make up about 20 percent of the center's total cash budget of $1.3 million each year.

"I do think there's some donor fatigue out there," Charbonnet says. "But it's not because donors haven't been greatly generous. It's just that we received a tremendous amount of evacuee money in a short period of time, and those same [donors] feel like they've already given. Budget-wise, they have done what they can do."

Still, Charbonnet says December donations "look pretty good for us," and the center does have a small budget surplus from 2004 that can be tapped if necessary to cover payroll and maintenance projects like a new leak in the roof. "I hate using up my surplus because they're so hard to come by, but I'm not saying I'm overly concerned," says Charbonnet. "It is hurting us today, and if it doesn't get better, then it will become a major problem. But based on history, I'm assuming that three, six months from now, things will be back to normal. We noticed it with the tsunami. I think after 9/11 was a very comparable situation. It squeezes us very, very tight. But I think [donors] come back."

United Way of Acadiana has had to stage its own comeback of sorts. Executive Director Margaret Trahan says the agency's annual fundraising campaign was launched Sept. 1, mere days after Hurricane Katrina struck southeast Louisiana. "We did not yet realize the full impact that Katrina would have on our area," Trahan says. "We immediately put it on hold for a month."

By October, United Way was ready to slowly resume its campaign but found that some local businesses were not. "Not until November were we really able to resume our momentum," says Trahan, who characterizes this year's push as producing "mixed results" so far. "We've found that some companies' donations are way up, and others are down considerably. What it comes down to is how connected a local operation is to New Orleans, in terms of location, commerce and so on."

A few days before Christmas, United Way had raised approximately 80 percent of its $3.2 million goal and planned to extend its fundraising season into January. The storms haven't only changed the organization's timetable. "We've changed what we are talking about," says Trahan. "We are talking about long-term recovery and about the services we provided pre-hurricane. We are talking about an expanded community with an expanded set of needs and a new set of challenges."

Other nonprofits in the area ' indeed, across the country, according to a recent CNN report that documented shortfalls for charities as far away as Washington, D.C. ' face similar challenges. According to Acadiana Red Cross Director Tony Credeur, his chapter is currently experiencing an approximate $50,000-$60,000 shortfall, money crucial to being able to continue to provide emergency communication services to military families and to respond to other local disasters that might occur, such as house fires. "People have been incredibly generous in response to the storms, and we want to thank them for that," says Credeur. "But we have to look at local operations and make sure we are keeping them financially solvent so that they are there the next time we need them for a local emergency." To bridge his budget gap, Credeur says the chapter is tightening its belt and exploring special events and a fundraising campaign of its own.

Even groups that aren't first responders have seen a difference in the funds they are receiving. Lafayette Habitat for Humanity Executive Director Melinda Taylor recently received a $375,000 check from the Houston-based Apache Corp. The company, which has operations in Lafayette and Houma, donated a total of $1 million in hurricane relief to the affected Habitat chapters and school districts. Taylor is grateful for the company's support and says Habitat will seek to maximize its impact for displaced families. Still, she worries about those who were already in the pipeline for assistance. "We aren't seeing a tremendous influx of undesignated monies," she says. "But we are doing everything we can to emphasize the fact that there were people here in need before the storm."

The Louisiana Association of Nonprofit Organizations is joining her on that mission. The group's Web site home page now includes a special donation message ' "In this time of need, LANO urges you to give local" ' and a link to its member organizations. President and CEO Melissa Flournoy says she isn't doing this to necessarily counter some vague notion of donor fatigue. "The Center on Philanthropy at Indiana University has suggested that there has actually been more charitable giving in the past four months," she says. "So what we want to do is to encourage giving to local nonprofits and not just to larger relief organizations. Because we simply must sustain the nonprofit sector in each of our local communities. We want to remind people to give to those groups that were helping people in communities across the state before the storms."