Melissa Bonin, like all artists, doesn't ever remember a time when she wasn't one. Like most children, she scribbled and drew, divining inspiration from the landscape around her and realizing that this childlike talent would grow into a woman's career. 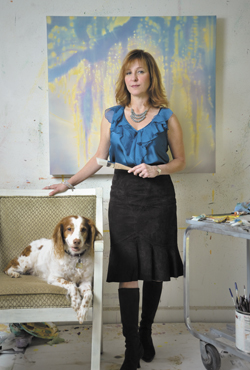 Melissa Bonin, like all artists, doesn't ever remember a time when she wasn't one. Like most children, she scribbled and drew, divining inspiration from the landscape around her and realizing that this childlike talent would grow into a woman's career.

Typically described as a landscape artist, Bonin works with oils and paints "wet on wet," meaning that she doesn't wait for one layer of the paint to dry before applying another, letting the colors blend, bend and bleed to form filmy, gauzy, dreamy scenes - interpretations of the lush Louisiana countryside.

Bonin herself looks like she walked out of a Georges Seurat painting. Everything about her seems to be light. She is tiny from years of studying ballet, and when she talks about anything, not just her work but her cooking, her friends, her family and her life, you can see how thrilled she is to be living the dream, her dream, to paint for her supper. Bonin has worked and shown and studied around the world, but it is her South Louisiana roots that permeate her work more than anything else.

Because of her attention and dedication to her native geography, Bonin has been a crossover hit not only with those outside of this area fascinated with the culture, but with people who are from or have lived here and miss home. Elaine Petrus and her husband Tim have been longtime collectors of Bonin's work. "My husband, Tim, and I are Louisiana natives and lived in Lafayette before moving to Texas in 1980," says Petrus. "We continue to miss the charming Louisiana culture as well as its rich natural environment. Melissa's art is not only soothing but it provides us with a touch of Louisiana's beautiful scenery."

Bonin was born in New Iberia to a family that was far from the typical artist's life. But her family saw her talent early and encouraged it, which led to her studying with artists like the late Elemore Morgan Jr. when she was only 16 at UL Lafayette. She graduated cum laude with a bachelor's degree in painting, but the artists and writers she'd met gave her artist's palette a taste for the world and she set off for what is in a sense our motherland of France. Bonin worked and studied for about two years in France, focusing on not only her art but perfecting the French language. During this interview she readily displays the fluency she retains.

Bonin's Lafayette home is an art lover's dream. Her studio is a large white space with tons of natural light spilling into paintings that are in the works. In her living room stands a tall self-portrait painted around the time her son was born 20 years ago. Works of art in the shape of furniture are nestled everywhere, and a painting by her friend and colleague in the arts, Lafayette's Francis Pavy, hangs in her bedroom.

Her latest, Moss Series, is influenced by Asian calligraphy. "I see a lot of moss on paintings and it often looks like popsicles on a tree. I thought there must be a way to paint this and make it feel like what it really feels like. So I started studying ancient Japanese and Chinese poetry because when I looked at the poetry, it looked like moss to me, flowing down." 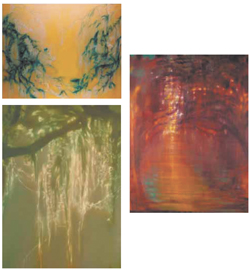 Bonin's Moss Series has become a sleeper hit at some of the more exclusive galleries in Houston and Dallas. She has shown her work, however, all over the country and world. Another of her series is named after "famous and powerful women" in history, like Madame Pampadour. There is a Bayou Series and a Vine & Branches Series, always in the spirit of Louisiana oils.

For the past 15 or so years, Bonin has made her living as a painter. "It was scary," she says of quitting "square" jobs and making her living exclusively as a painter, "but after I started I thought, Why didn't I do this sooner?'"

After her son was born she started painting portraits to make a living; this gave her the impetus to pursue what she'd wanted all along. Starting in 1994 she and two other artists opened the Left Bank Gallery in New Iberia. In 1999 she helped found a talent program for the children of Iberia Parish that nurtures budding artists. Children, she says, are still her favorite people to teach to paint. Now her days are spent adding to each series and creating new ones,
So what is next for Melissa Bonin? More galleries, sure. More collectors calling. More charity work. She talks about going back to stay in Europe, France or even Italy this time, with a thrilling sense of adventure.

There is an unnamed painting in her living room that has a real depth and makes its viewer curious to go beyond it. It looks like a Louisiana river at dusk. "This is a waterway that combines the water and the oak trees and the flickering of lights, cranked up to a high intensity. I started looking at crystals and the way the light glistens off crystal and comparing it to rain droplets on trees. I wanted that glistening, sparkling, shooting light," which is probably Bonin's best and purely accidental metaphor for herself.