With an emergency humanitarian job assistance program set to expire, many hurricane-affected artists and social workers in Acadiana face difficult decisions about their future. 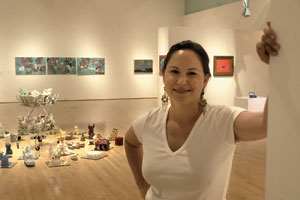 At the Lafayette Workforce Development office, a one-stop shop for unemployment services, job counselor Beverly Harris has recently been in the unique position of providing job assistance to herself. "Some of the same procedures that we're giving the other evacuees, I am also taking those, too, to help myself," she says.

Harris, an evacuee from New Orleans East, has been working at the development office since September, starting as a receptionist before moving up to counselor. "I've enjoyed it," she says, "because I'm in the same condition that they're in, and we can kind of relate."

Harris and other evacuees' positions with Workforce Development, funded through a National Emergency Grant program, will expire this Saturday, March 18.

"I think we all realized that it would eventually be out," says the soft-spoken Harris, "and we just trust when that time comes we'll be a little bit more going into the direction that we need to go."

Prior to Hurricane Katrina ruining her home, Harris worked for 14 years as an accounts payable clerk for the Sazerac liquor company in Metairie. The company is now back up and running, and Harris says she could possibly get her old job back ' except she has been unable to find any affordable housing in New Orleans.

"A lot of people," she says, "would like to get back into the city, but they're not able to get back for various reasons, and a key thing is the housing at the moment."

Harris is now renting month-to-month in Lafayette, living with her elderly mother, also a New Orleans evacuee. "It's day by day," she adds, "and decisions are very hard to make because we're just kind of undecided on which way we're going."

Since September, National Emergency Grants have paid wages for thousands of hurricane victims who have worked in humanitarian causes helping other evacuees in the aftermath of Katrina and Rita. The unique program, which paid workers $9.75 an hour for up to 1,040 hours, enlisted evacuees to assist in public or nonprofit relief efforts ranging from shelter operation to job counseling and social work.

"This was something new to all of us," says Glenn Dugas, executive director of the Lafayette Workforce Investment Board, which administered the program. "But I think we coped and came through with flying colors. We still have a lot of work to do. I don't know if we'll ever get back to normal, but we're sure going to keep on trying."

The program was instrumental in putting 559 people to work throughout Acadiana. In Lafayette, the money helped pay for evacuees to work at the Cajundome shelter, Acadiana Outreach, and United Way, among other organizations.

"It would have been a desperate situation if we wouldn't have been able to do what we did," Dugas says.

In the past, only areas directly impacted by natural disasters were eligible for NEG funds. But due to the mass displacement caused by Hurricane Katrina, Congress amended the U.S. Department of Labor's NEG program to funnel funds to areas that took in large numbers of evacuees. States and parishes were awarded the money based on the number of evacuees they received. With the highest number of evacuees accounted for, Texas received $72 million in NEG funds, while Louisiana received a total of $62 million. Lafayette received $2.6 million, the second highest amount in the state behind Baton Rouge.

After being extended twice beyond the initial January deadline, these funds and jobs are coming to an end.

Rose Macaluso, who worked for the past five years as assistant curator with New Orleans' Ogden Museum, was out of a job shortly after Katrina when the Ogden laid off more than half of its staff. In October, she was hired through NEG funds to work with Project HEAL (Helping Employ Artists Locally). Project HEAL was set up through the Acadiana Arts Council to help find and fund work for displaced artists. To date, the project has helped raise more than $300,000 and provided work for approximately 250 displaced artists, musicians and performers, primarily from the New Orleans area.

Through NEG funds, Project HEAL provided 12 staff jobs to evacuees ' all of which will be cut this weekend. The program will continue on a limited basis; unsolicited donations to Project HEAL have tapered off, and grants are becoming more restrictive.

"Project HEAL will probably continue through the summer and into the fall," says Macaluso, who has served as Project HEAL's director since January. "We are staging ourselves to make sure that the money we do still have will get to the artists very quickly, because we intend to spend every last dollar and cent putting it into the pockets of artists in need. But those unrestricted dollars, we used to get five or ten donations a day in the mail. I haven't seen one of those in weeks."

People like Karen Livers, a New Orleans theater artist who has lived with friends in Rayne over the past six months, are already feeling the impact. "Project HEAL was really one of the best things that could have happened to me," she says. "It gave me the opportunity to spend some time in Acadia Parish trying to mobilize some things. And I'm touring in schools, something I've always wanted to do."

"I know some other artists who have done some things in the Lafayette area," she adds, "and they've really enjoyed being in Lafayette. It's that whole exchange that's been wonderful. But we don't know if that's going to last."

Livers says she's been told she likely won't be getting any more work through Project HEAL and is unsure what she'll do next. Recently, she has been able to pick up occasional weekend jobs in New Orleans, but the work is limited.

"I'm really confused about it," she says. "I've tried to put out some feelers in other places and back home [in New Orleans]. Things that I'm accustomed to doing like convention work, that doesn't exist. I was telling someone earlier today, I have no clue what I'm going to do. None."

Macaluso says some members of the Project HEAL staff have landed on their feet. "Some of our employees are transitioning back to their former jobs [in New Orleans]," she says. "This has given them enough time so they can transition back. Others have no idea what they're going to do.

"The timing of the schedule of recovery has been so incredibly slow," she adds. "People are disappointed on all economic fronts: with tourism, with housing, with job creation. After the storm, this stuff just has not happened."

Not everyone lays the blame for employment problems solely on the slow rebuilding of the state's economy. Dugas says the NEG employment should have been cut three months ago.

"To tell the honest truth, we probably should have ended it the first time [in January]," he says, "because what we're finding is individuals just want to keep working on these temporary jobs instead of finding or letting us help them find permanent employment. These jobs are temporary; there's no benefits, you don't get medical, you don't get all the other fringes. That's the bottom line. An individual will never get back to a normal condition unless they're working in a permanent job."

Permanent jobs remain a tough find for many evacuees, especially when it comes to employment in their profession ' a key for many to restoring some sense of normalcy.

In the arts community, many people whose livelihoods were inextricably tied to New Orleans' stature as a cultural arts Mecca face a unique struggle finding work in the aftermath of Hurricane Katrina ' which was the genesis of Project HEAL.

"Part of the thinking was, if we can just keep these people around, they'll stick around," says Louisiana Crossroads Director Todd Mouton, who helped start the project with Matthew Goldman, the New Orleans Jazz & Heritage Festival's press and advertising director. "We wanted to stop the outmigration."

Macaluso says Project HEAL has helped many artists transition into new homes and jobs, but the state's cultural economy is still hurting. "The rate that [artists] are getting paid is lower; there's significantly less venues than there used to be [for musicians] to have the opportunity to play, and then they're being asked by a lot of organizations to play for free. [Project HEAL's] getting all those calls, asking to supplement their fees."

Nevertheless, she's determined to keep the program running to assist in whatever small way it can.

This Saturday, the event Carry On: A Day of Renewal will serve as a joint fundraiser for both the Acadiana Arts Council and Project HEAL. Macaluso also hopes the event will raise funds for a national tour of selected works from the Acadiana Center for the Arts' current exhibit, Sustained Winds: Before ' During ' After. The exhibit, curated by Macaluso and sponsored by Project HEAL, features works created by Louisiana artists during the emotional aftermath of the storms.

"It's a really powerful exhibit, and we hate to see it end," Macaluso says.

For the next three months, she will remain at the Acadiana Arts Council and fill in for AAC marketing director Cathy Damiano, who's on maternity leave. Beyond that, Macaluso's still figuring out her options.

"I'd love to go back to New Orleans, but the cultural economy has to get back to what it was [pre-Katrina] for me to be able to do that," she says. "Things change every week. For an evacuee, it's just one day you're staying here, the next day you're moving."