The measure is not retroactive - it only applies to the RedFlex contract and if approved would be triggered next year when the end of the one-year extension approaches.

The Lafayette City-Parish Council on Tuesday will consider an introductory ordinance that would require future extensions of Consolidated Government's contract with Redflex be submitted to the council for approval. The ordinance was submitted by Distict 9 Councilman William Theriot, who during a wrap-up session for the 2011-2012 budget questioned City-Parish President Joey Durel's exercise of a clause in the original four-year contract allowing for one-year extensions of the contract. 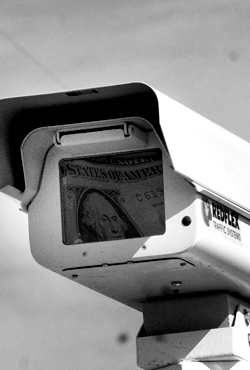 The contract with Redflex, which operates the traffic signal cameras and speed vans on city streets, was signed in 2007 and was set to expire in June of this year. But last spring the Durel administration activated a one-year extension of the contract. City-Parish attorney Mike Hebert, upon Theriot's urging, later released an opinion essentially clearing Durel and future city-parish presidents to exercise the one-year extension clause. Hebert's opinion hinged in part on whether the RedFlex contract constitutes a "franchise" with LCG. The Lafayette Home Rule Charter stipulates that franchises can only be granted or extended by ordinance, which is a function of the council.

Prior to Hebert's opinion siding with Durel, former assistant city attorney Lester Gauthier issued an opinion decreeing the contract extension in violation of the Home Rule Charter, arguing that the contract is indeed a franchise and that such transactions with outside vendors must be signed by the city-parish president, in this case Durel. The administration has acknowledged that an LCG clerk actually signed the extension, not Durel.

The RedFlex contract issue raises some important questions for the council and the administration. If Hebert's reading of the contract and Home Rule Charter stand, then the original four-year contract with RedFlex is effectively open ended: Durel can presumably renew it again next year and in all future years he's in office, and his successor can do the same. So is the original four-year contract really a perpetual contract? And, since the original contract was entered into through a resolution and ordinance voted on by a previous council - none of the current CPC members was in office in 2007 - can a previous council tie the current council's hands and bind it to the contract?

As this newspaper has observed, an arrangement in which contracts activated by council ordinance - a requirement of the Home Rule Charter - can be extended indefinitely by the city-parish president leave such contract renewals vulnerable to cronyism and kick-back schemes. We're not accusing Durel of that, but the situation is ripe for exploitation by politicians with fewer scruples, and Louisiana has had no small share of unscrupulous politicos.

Theriot's ordinance is not retroactive - it only applies to the RedFlex contract and if approved would be triggered next year when the end of the one-year extension approaches. If the council approves the ordinance on Tuesday it will go before the council for final approval two weeks later. Durel, as LCG's chief executive, has veto power over ordinances.