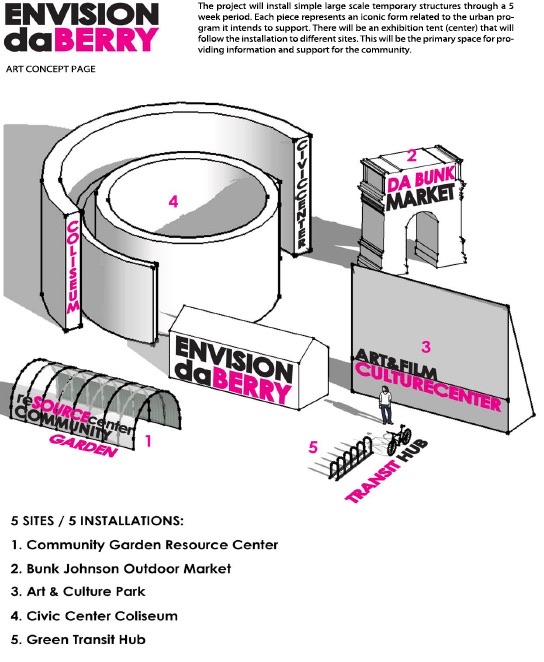 When a group of New Iberia Senior High alums met last year in New Iberia to reminisce and catch up on the town's happenings, it didn't take long for the friends to face a harsh reality plaguing their hometown.

"Everyone we knew from school was no longer living there."

For Phanat Xanamane and Amelia "Mimi" Cronan, two New Iberia natives who both moved out of state for education and career opportunities and recently returned to New Iberia, the notion that the town has historically driven away "young talented residents" was an unacceptable one.

A "brain drain" observation between friends thus became the brainchild of Envision daBerry, a nonprofit coalition of former and current New Iberia residents joining in the efforts to transform the poverty- and blight-stricken West End of New Iberia into a viable community that's attractive to both new and erstwhile New Iberians.

The group, according to its website, will be working with 21 LSU architecture students throughout October to install five temporary structures, models of sorts to show the community what Hopkins Street could be with the addition of a community garden, outdoor market, art and culture park, civic center and transit hub:

da BERRY is both a nickname for New Iberia and a multi-generational coalition of residents whose main role is to construct an opportunity for local growth, development, and participation through public art. Working with the Hopkins Street Revitalization Association, Envision da BERRY will  provide a forum for public discourse so that residents can initiate and guide urban renewal efforts. We are committed to promoting art, ecology, and connectivity within our city while building the foundation for a cultural, creative class to thrive.

We didn't want to start from scratch, and since there were already many Master Plans for redevelopment in place in the West End, it seemed like a natural place to start. Phanat grew up along Hopkins Street, and it is one of the oldest parts of New Iberia and is currently the poorest. Beginning in the early 1950s, the draw of the outside world brought passenger rail service, the returning war veterans, and a blooming entertainment business to New Iberia. While these additions helped many in the community, it also led many of the most talented of our local artists to leave in search of better living standards. The out-migration resulted in a slow deterioration of local prosperity. This "brain drain" perpetuated the out-migration of new young talented residents, and meanwhile the remaining population became quickly afflicted by urban ills: low standards of literacy, drugs, poor health practices, and accompanying high poverty rates. It is precisely this audience that we seek to engage with through the power of public art.

As young people who left New Iberia and returned, we want to open the city up by expanding the creative class and contributing our cumulative professional expertise. Our project will succeed in its ambitious goals by introducing a new model for transformative design processes that integrate engagement and dialogue with art as essential tools in community building.

Visit the Envision daBerry website for more information on the group's efforts.