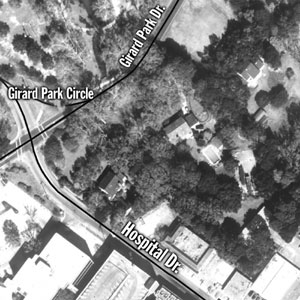 To recap, the university's and the Louisiana Division of Administration's excuse for not releasing the new appraisal was that it was conducted "in anticipation of litigation." Then the university also said it wasn't expecting to be sued over the botched land swap deal, the one where 36 acres of UL's Johnston Street horse farm would be exchanged for Davidson's 4 residential acres on Girard Park Drive to expand UL's campus.

In the latest head-scratching development in the land swap debacle, last week Authement's attorney, Steve Oats, told The Independent Weekly's legal counsel, Gary McGoffin, that the state may expropriate the Davidson property, a legal process also commonly referred to as eminent domain. The state claims if it can't negotiate a deal to buy Davidson's property, it may take the old homes and acreage ' private property that isn't even connected with the university campus. The courts would decide whether the state has a right to take the site, and Davidson (a past president and current member of the UL Board of Trustees) would have a right to a trial by jury to determine his compensation. That's the litigation they're anticipating.

This justification for keeping the record from the public appears to be a desperate measure in Authement's longstanding mission to acquire Davidson's property. In late 2003, Davidson's good friend, appraiser George Parker, was hired by Authement to value the land and homes, and Parker came up with a $3.25 million price tag.

That's what Davidson thought he'd get in the land swap, especially after the Board of Supervisors for the UL System approved the deal in mid-2005. Under intense criticism over the dubious $3.25 million valuations of both the horse farm and Davidson properties and numerous questions about the cozy group of principals involved, in December the board asked the state DOA to recommend a new, "independent" appraiser. In all likelihood Davidson's came back a couple of months ago from independent appraiser Lane Godshall at about half of Parker's appraisal (the horse farm has not yet been reappraised), but concerned residents won't know for sure until they get to see the document.

Presumably, neither Authement nor Davidson liked the outcome of the new valuation, leading to the decision to keep the record from the public. Authement announced in mid-July that the land swap deal was off ' but that he's still seeking money from the state's cash-strapped higher education board to buy the Davidson land outright.

Perhaps the most interesting twist in the saga's expropriation chapter is Davidson's experience with this kind of legal work. For years, he handled expropriation matters for local government, with George Parker (who is now retired) conducting the appraisals.

The new appraisal is unquestionably a public document, says Josh Zelden, an attorney for the Louisiana Press Association. The "anticipation of litigation" exemption applies to executive sessions held as part of public meetings ' not to this type of public record. And in cases where closed-door executive session meetings are called to discuss pending litigation, an attorney general's opinion holds that there must be a written demand and the parties disclosed. So for the state to even attempt to piggy-back on this exemption it must produce a written demand from its would-be opponent, Davidson (a demand it has not disclosed because it likely does not exist) and show that public discussion of the case would be detrimental to the state's position or strategy. Only then could the documents related to this exemption be legally kept from the public. "It is irrational and self-contradictory to suggest that disclosure of an appraisal showing a lower value for the property in question could hurt the public body attempting to acquire the property," says Zelden. "It can only help."

It's unclear what kind of argument the state will make to support expropriation of the property. To successfully take private property, government must prove there is a public or "necessary" purpose, like construction of an interstate. But some state and local governments have been trying to take private property for economic development purposes; the issue has become a political hot potato in post-Katrina Louisiana, and this fall voters will decide on a far-reaching constitutional amendment to restrict expropriation for economic development purposes.

Why the state would consider creating a legal mess over this already controversial piece of property is anyone's guess. And if its latest excuse has any legitimacy, although it still falls short of proving the appraisal should not be released to the public, is any private property on Girard Park Drive ' or anywhere in Lafayette, for that matter ' safe from the university's grasp?