The Occupy Wall Street movement has spread to at least 80 other cities. 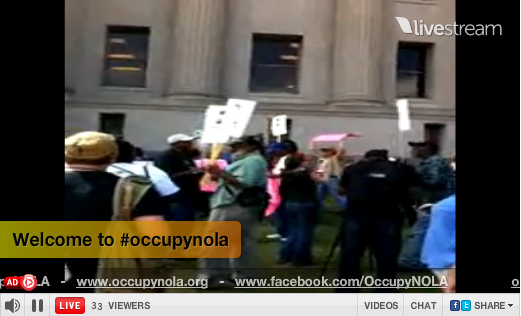 A screen shot from live streaming video shows what appears to be Occupy New Orleans protesters in front of City Hall.

The Occupy Wall Street movement that began three weeks ago in New York City as a protest against corporate greed and the increasingly disproportionate accumulation of wealth in the top income bracket spread to New Orleans today, Thursday, Oct. 6. According to a brief article in The Times-Picayune, protesters will march across the city and set up an encampment across the street from City Hall. Some of the protesters have vowed to live in the encampment for months. The group is also streaming the event live on its Facebook page, and based on recent video, scores of protesters are now in front of City Hall.

The Occupy Wall Street movement has spread to at least 80 other cities. The Times-Pic article also has links to reports by other media outlets.

Occupy NOLA is leaderless non-violent resistance movement composed of people from various sociopolitical and socioeconomic backgrounds. We are all inclusive. The one thing we all have in common is that We Are The 99% that will no longer tolerate the greed and corruption of the 1%. We want to make a positive difference. Join us and help us grow!

The time has come to deploy against the greatest corrupter of our democracy: Wall Street, the financial Gomorrah of America. It's time for DEMOCRACY NOT CORPORATOCRACY!

As we watched the continuing marches on Wall Street and those across the nation reacting to the movement, we decided to set up a website and social media networks to provide a hub for those organizing in New Orleans and the surrounding area. Many of us cannot be there in NYC and, like them, wanted to do something.

Occupy NOLA is our way of participating in these events, in spirit and solidarity, in order to support those organizing and demonstrating in various cities and states across America.