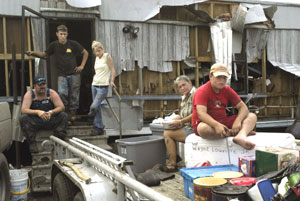 In competition among other non-daily newspapers, Fensel swept the feature photo category and also placed first in sports for an image of a UL Lafayette volleyball player for an Independent story on the contentious Title IX law. Additionally, she won first for a news photo of a Delcambre family struggling to rebuild their lives in the aftermath of Hurricane Rita and placed second for a photo essay on a Cypremort Point camp.

Contributing photographer Robin May won first place in the non-daily photo essay category for her images of New Orleans residents in the immediate aftermath of Hurricane Katrina.

Senior Editor Leslie Turk placed first place in the investigative reporting, an open category, for a series of stories involving the suspect sale of a portion of UL's Johnston Street horse farm. Turk also placed second in the non-daily news category for her piece on code violations and safety concerns during construction of the hotel on the university's property near the Cajundome.

Contributing Writer Mary Tutwiler won first place in the non-daily feature writing and news reporting categories ' the former for a poignant story on the death of her father after he evacuated from New Orleans and the latter for a story on billing problems and a mysterious contract extension issued by Iberia Parish to Mosquito Control Contractors Inc.

Tutwiler and Fensel also captured a number of awards for their work for other publications. Tutwiler won two firsts for food and travel articles that appeared in The Times Picayune, and Fensel won first place for a color ad for Dr. Chip LaHaye in 008 magazine, first place for a photo essay on Houston's Asian community and its food that ran in Houston magazine and third place for a photo essay on Galveston in that publication.