Two bands are on tap tomorrow for Downtown Alive! 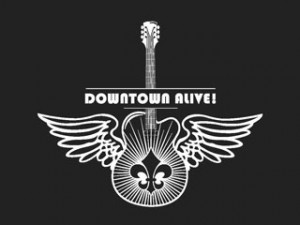 Two bands are lined up tomorrow for Downtown Alive!

Every Friday in the fall and spring Downtown Development Authority hosts this free concert series. Food and beverages are available and dancing is encouraged. It is always held in one of several downtown parks and tomorrow it is in Parc International.

At 6 p.m. Mercy Brothers start the show. Described as "hillbilly gospel," Mercy Brothers are a throwback to the haunting wails of Tin Pan Alley when railroads were the only way to travel.  Kevin Sekhani, Mark Meaux, Andrew Duplantis, Garland Theriot, Greg Walls and Cal Stevenson make the band. They are planning their debut album release shortly.

Speaking of Mark Meaux, The Bluerunners play at 7 p.m. and close out the evening. This band has been a stalwart companion to Lafayette since 1987 and are one of the most well known and liked Cajun bands out there, mixing dashes of zydeco with a dollop of punk backbone into their sound. They don't play too often anymore so this is a performance not to miss. This is a reunion show for the 'Runners, with some of the original members like former bassist Rob Savoy heading back to Lafayette to perform.

These shows are free. The more people who show up and dance and support the vendors there, the more DTA will bring in acts that rule. The math is simple. Friday is expected to have a low of 64 degrees with a high of 87 with a few clouds, or in other words perfect dancing weather. Dozens of restaurants and bars to hang out in before and after the show downtown.

If you bike downtown there is a free valet service for your two-wheeled friend courtesy of not-for-profit BikeLafayette. You check your bike, they watch it and make sure it doesn't get frisky and wheel itself away, then scoop it back up after DTA and maybe tip them so BikeLafayette can keep hosting cool stuff. You can find them at every DTA this fall.