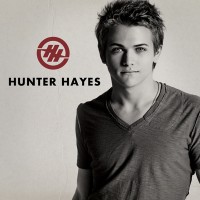 Hunter Hayes is the latest kernel from a crop of homegrown talent harvested for the national scene. This country music singer-songwriter appears on David Letterman tonight.

Hayes moved to Nashville from Breaux Bridge about two years ago and since then has written music for some of country's biggest stars. Luckily for Atlantic Records marketing department to which Hayes is signed, he looks like a much hotter version of Justin Bieber as well as being talented. His self-titled debut album drops today.

"Storm Warning" is the first single released. It's a relaxing country song, sweet and reflective of his upbringing. ("Have you ever noticed every hurricane gets its name from a girl like this/She's the Cat 5 kind keeps you up at night hanging on the edge of a kiss") He just got off tour with Taylor Swift and the two are a great match - it is country music that is poppy without being too offputting to traditional country fans and both mellow and catchy enough to hum along to, the kind of songs that sneak up on you and before you know it, you know the words.

Also new is the free blipper app available to Hayes' fans. Available for Androids, iOS smartphones and tablet,s you download the app, click on his album cover and get exclusive content. If you have the supported technology for it, just look for blipper in your apps and nab it.

Hayes has written or co-written for Brad Paisley, LeAnn Rimes, Keith Urban and more before becoming a star in his own right. He's already performed at the most hallowed country music ground, the Grand Ole Opry.

Hayes is in the middle of his first headlining tour. Check him out at his website. Letterman airs at 10:35 p.m. on CBS/KLFY or for the sleepyheads hit up Letterman's site tomorrow for video of Hayes' performance.